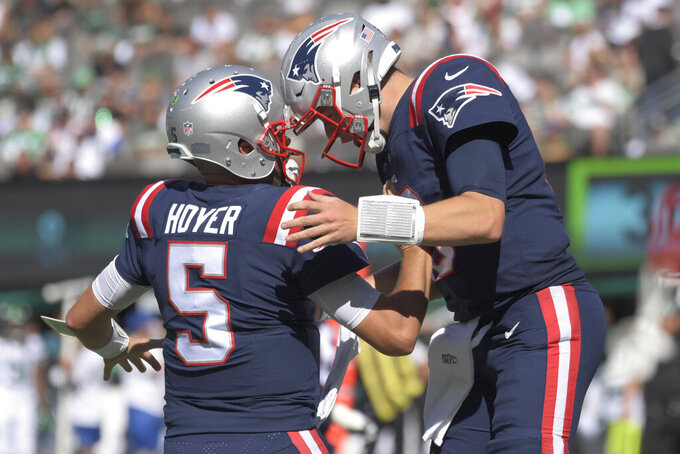 EAST RUTHERFORD, N.J. (AP) — Mac Jones kept his mistakes to a minimum, moved the ball down the field and did enough to earn his first NFL victory with the New England Patriots.

Thanks, also, in large part to a nightmarish outing by Zach Wilson for the New York Jets.

Jones was smart and efficient, Damien Harris and James White had touchdown runs and the Patriots intercepted Wilson four times in a 25-6 victory Sunday.

“It feels good,” Jones said. “It’s what everyone is saying: It’s hard to win in the NFL. You've got to take it for what it’s worth. We’ll get better. Anyone who watched the game would agree that the offense can play better.”

At least he and the Patriots were better than Wilson and the Jets. And it wasn't close.

“He’s going to compete for four quarters, no matter what’s going on,” White said. “He stays motivated. It’s tough out there being a rookie quarterback. A lot of things get thrown at you. He stayed locked in throughout the entire game.”

New England topped New York for the 11th straight game, boosted by Wilson throwing the ball to the wrong team in the home opener for the Jets (0-2), who have lost 11 straight in September.

It got so bad early in the fourth quarter when the No. 2 overall draft pick overthrew a receiver, the crowd at MetLife Stadium — boisterous and excited early at their first game since Dec. 22, 2019, because of the pandemic — began booing the young QB.

Wilson's struggles might have been expected: Bill Belichick is 22-6 against rookie quarterbacks since taking over as Patriots coach in 2000.

“Bill always talks about winning the turnover margin, and how big an indication that is of who wins the game,” said Patriots safety Devin McCourty, who had one of the four INTs. “In order to win the turnover margin, we’ve got to create turnovers. We did a good job of that early in the game. That had a big impact on the game.”

After Marcus Maye's sack pushed the Patriots out of field goal position on their opening possession, the Jets got the ball at their 8. Wilson threw downfield to Corey Davis in traffic and J.C. Jackson tipped it into the air, McCourty deflected it and the ball landed in Jackson's hands for his first of two interceptions.

“You go out there and set the tone,” Jackson said, “and hopefully your teammates feed off that.”

Wilson's second pass was also picked off, this time Adrian Phillips grabbing the ball after the high throw went off Davis' hands. New England got into the end zone, with White running it in for a 10-0 lead.

Wilson made another poor decision on New York's fourth drive with an underthrown pass to Elijah Moore that was easily picked off by Jackson again.

“He was off a little bit,” Jets coach Robert Saleh said.

The fourth interception opened the second half when he floated a pass downfield that was easily picked off by McCourty. Two plays later, Harris shed what appeared to be seven — yes, seven! — tackle attempts by the Jets for a 26-yard touchdown.

Folk, a former Jet, made a 32-yarder in the third quarter for his franchise-record 32nd consecutive field goal. He added a 26-yarder to cap his day.

“I’ve heard, but it doesn’t matter to me really,” Folk said of the mark. “I’ve never been one for records.”

He was referring, of course, to former Jets quarterback Sam Darnold being caught on TV saying he felt as though he was “seeing ghosts” in New England's 33-0 rout in Week 7 of the 2019 season.

Wilson was asked if he saw ghosts: “No,” he said. “Definitely not.”

The Jets trailed only 13-3 at halftime, but history showed the Patriots had it all but wrapped up. New England has won 41 consecutive games when leading by double digits after two quarters, the NFL's longest such active streak.

Patriots: RT Trent Brown sat with a calf injury, and replacement Yasir Durant was benched in the second half after allowing three sacks. Durant was replaced by Dustin Herron.

Jets: WR Jamison Crowder was a surprise scratch after Saleh said his groin injury “flared up” a bit Friday.

Jets: head to Denver next Sunday.