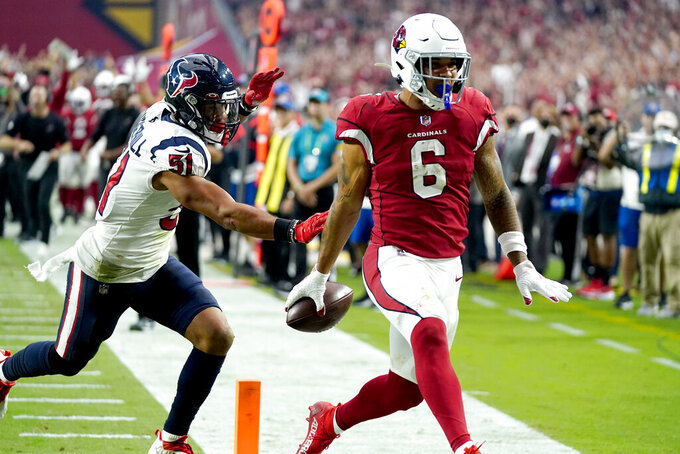 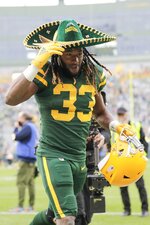 GLENDALE, Ariz. (AP) — Arizona's Kyler Murray has become one of the NFL's most exciting quarterbacks, scurrying around in the pocket to avoid would-be tacklers and often finishing with spectacular throws downfield.

Come to think of it, that sounds a lot like a description of Green Bay's Aaron Rodgers.

It's no surprise then that Murray — who is 14 years younger than Rodgers — has modeled portions of his game after Rodgers. Now the two early season MVP candidates will meet on the field for the first time in their NFL careers when the Cardinals host the Packers on Thursday night.

“He’s probably my favorite quarterback to watch — his swag, the way he plays the game, what he’s done in his career," Murray said. "I admire his game a lot. First time playing against him, first time being able to meet him.

The Cardinals are 7-0 for the first time since 1974 and trying to set a franchise record for wins to start a season. Green Bay (6-1) stumbled in the season opener, but since then has won six straight games. Rodgers is rolling during that six-game stretch, throwing 15 touchdowns and just one interception.

Rodgers had plenty of complimentary words for Murray as well. He also acknowledged that even though it's just Week 8, there are playoff-type vibes in the air.

“We’re aware of that,” Rodgers said. “A lot of times when you’re not playing a division opponent it comes down to the tiebreakers like this. There’s still a lot of football and a lot that can happen throughout the season with momentum and the way teams play, but this is an important one.”

Green Bay will likely be playing this game without receivers Davante Adams and Allen Lazard, who went on the reserve/COVID-19 list this week. Adams is tied for second in the NFL in catches (52) and is third in yards receiving (744).

Arizona can relate. The Cardinals are just getting over a virus outbreak on their roster. Coach Kliff Kingsbury, quarterbacks coach Cam Turner, edge rusher Chandler Jones and defensive linemen Zach Allen and Corey Peters have all missed time over the past two weeks. Everyone but Peters has returned.

The Cardinals navigated those COVID-19 challenges and still beat Cleveland and Houston. Arizona expects Green Bay will have similar resiliency.

“At the NFL level, you can't count out teams when someone's not on the field,” Cardinals rookie linebacker Zaven Collins said. “(Adams and Lazard) are great players, but usually there's not a very big drop-off when a backup is in. That's something you have to take into account. It might not change that drastically.”

The Cardinals are also missing some star power. Defensive end J.J. Watt (shoulder) was ruled out on Wednesday after not practicing all week. It'll be the first game he's missed this season.

Kingsbury is known for his air raid-style passing game, but the Cardinals' run game is also among the league's elite this year, ranking fifth in the NFL.

Most of the work has been done by the stellar duo of Chase Edmonds and James Conner, whose contrasting styles have been a good fit together. Edmonds is a little more of a speedster and a threat to catch passes out of the backfield. Conner's bulldog style has become the team's go-to option in short yardage and goal-line situations.

Edmonds is averaging nearly 6 yards per carry and has also caught 27 passes. Conner has 89 carries for 336 yards and six touchdowns.

Cardinals star receiver DeAndre Hopkins arrived in Arizona last season after a trade with Houston. Outside linebacker J.J. Watt joined the Cardinals via free agency after spending his entire career in Houston.

Packers wide receiver Randall Cobb spent one season with the Texans last year before the Packers reacquired him at the start of training camp. Outside linebacker Whitney Mercilus joined the Packers last week after the Texans released him.

Houston has gutted its roster over the past few years as it tries to rebuild. The Texans have a 1-6 record and lost 31-5 to the Cardinals last week.

Tight end Zach Ertz had a stellar debut for the Cardinals last week, catching three passes for 66 yards and a touchdown in a win over the Texans.

Arizona acquired Ertz from the Eagles in a trade after Maxx Williams was lost for the season because of a knee injury. The 30-year-old Ertz is a three-time Pro Bowl selection and makes the Cardinals' offense more diverse.

In his first game with the Cardinals, Ertz hauled in a one-handed grab over the middle and also scored on a 47-yard touchdown, which was the longest of his career.