NFL star Antonio Brown gets probation for fight with driver 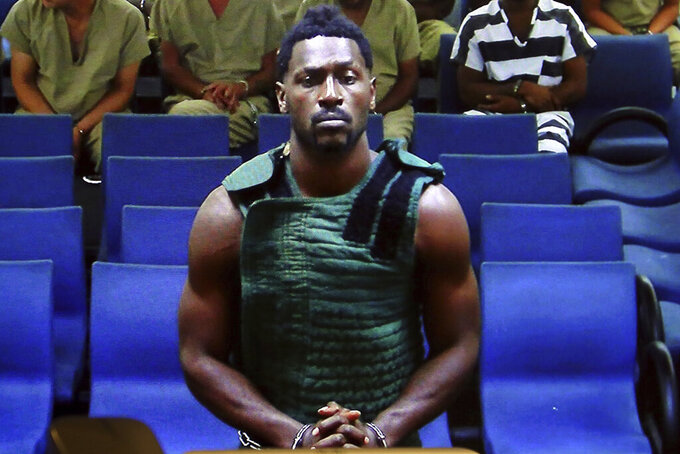 NFL free agent Antonio Brown appears at the Broward County Courthouse in Fort Lauderdale, Fla., via video link Friday, Jan. 24, 2020. Brown was granted bail on Friday after spending the night in a Florida jail. The wide receiver will have to pay a bond of $110,000, surrender his passport, wear a monitor, get mental health evaluation and pass random drug tests. He also can't have guns. Brown is accused of attacking the driver of a moving truck that carried some of his possessions from California. (Amy Beth Bennett/South Florida Sun Sentinel via AP, Pool)

As part of a deal with Broward County prosecutors, Brown pleaded no contest to burglary with battery, burglary of an unoccupied conveyance and criminal mischief. He will serve two years of probation, undergo a psychological evaluation and follow-up treatment, attend an anger management course, perform 100 hours of community service and follow a stay-away order from the truck driver and the moving company owner.

Brown's attorney, Carson Hancock, said in a statement that the case resulted from a misunderstanding between Brown and the moving company about payments and should have been handled as a civil dispute.

"Rather than engage in a protracted legal case, Mr. Brown decided to resolve this matter in an expeditious manner in consideration of his family and his football career," Hancock said.

Brown was one of the NFL's top wide receivers during his nine seasons with the Pittsburgh Steelers. He was traded to the Oakland Raiders last year but released before ever playing a regular season game following several off-the-field incidents. He was then signed by the New England Patriots, who released Brown in September after a second woman in 10 days accused him of sexual misconduct.

Police responded Jan. 21 to a disturbance call at Brown's Hollywood, Florida, home, where the moving truck driver said Brown and his trainer hit him.

Brown had refused to pay $4,000 to the driver to release his household goods, according to police. The driver told officers that Brown threw a rock as he drove away, causing a small dent on the moving truck and chipping the paint.

Brown had left the scene by the time police arrived, and the trainer was taken into custody. Brown turned himself in two days later.