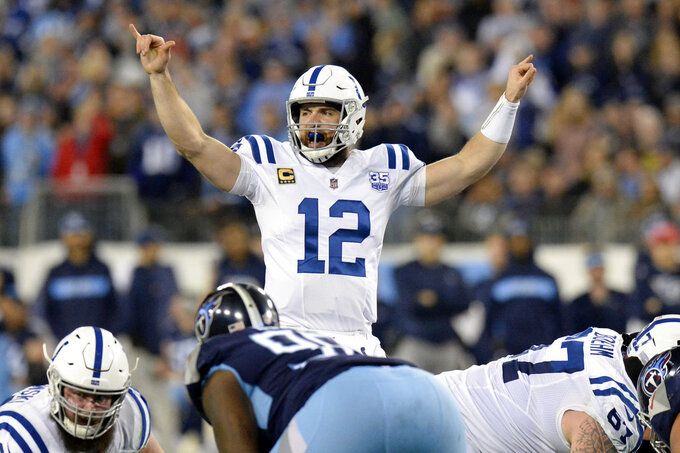 Indianapolis Colts quarterback Andrew Luck (12) calls a play against the Tennessee Titans in the first half of an NFL football game Sunday, Dec. 30, 2018, in Nashville, Tenn. (AP Photo/Mark Zaleski)

INDIANAPOLIS (AP) — Frank Reich mastered the art of the comeback while playing quarterback.

He cemented his reputation Sunday night.

Nearly 11 months after accepting the job Josh McDaniels spurned, Indianapolis' backup choice completed one of the most remarkable midseason turnarounds in league history by leading the Colts to their first playoff berth since 2014.

"That was the silver lining, if you will, of a 1-5 start," Reich said Monday, referring to his players' ability to ignore distractions and focus on the upcoming task. "As I have alluded to and some players have alluded to, we've been in this — for lack of a better word — playoff mode for a while, kind of with our backs against the wall."

It's only the third time an NFL team has rebounded from such an abysmal start to make the postseason — adding another chapter to Reich's uncanny tale.

In November 1984, he replaced Stan Gelbaugh after Maryland fell into a 31-0 halftime deficit at No. 6 Miami and wound up throwing six second-half touchdown passes to give the Terrapins a 42-40 victory — then the largest comeback in Division I history.

In January 1993, Reich replaced the injured Jim Kelly in Buffalo's wild-card round game and rallied the two-time defending AFC champs from a 35-3 deficit to beat the Houston Oilers 41-38 in overtime for the largest comeback in NFL history.

So when McDaniels reneged on his deal to take over the Colts two days after the Patriots lost to Philadelphia in the Super Bowl, Colts general manager Chris Ballard turned to Reich.

"The backup role has suited me well in my career," Reich joked in February at his introductory news conference.

But a consistent message helped keep players and coaches composed, too.

The result: Indy (10-6) won nine of its last 10, beating two division champions and taking the regular-season finale at Tennessee to earn the AFC's No. 6 seed.

Reich is the fourth consecutive Colts coach to reach the playoffs in his first season as coach, joining Tony Dungy, Jim Caldwell and Chuck Pagano, and now takes a team full of confidence to Houston (11-5) for a wild-card round game Saturday.

"I don't think there was anything crazy different that happened," left tackle Anthony Castonzo said Sunday when asked about the turnaround. "Guys just maybe focused on their job a little more, and had a little bit more urgency. It didn't really seem like a moment where anything was different. It was just staying that course."

The first indication things were changing emerged in early October when Indy's oft-criticized offensive line suddenly began playing better. For five games and 239 consecutive drop backs, the Colts didn't allow a sack. They finished this season allowing a league-low 18 after giving up a league-high 56 in 2017.

There were other changes, too.

Marlon Mack rushed for more than 100 yards four times, the highest total by a Colts running back since Joseph Addai had four 100-yard games in 2007. Tight end Eric Ebron fulfilled the potential scouts saw when he was in college.

And, of course, there was Andrew Luck's resurgence, too.

After missing the entire 2017 season because of a partially torn labrum in his throwing shoulder, he wound up finishing with career highs in completions (430), attempts (639), completion rate (67.3 percent) and rating (98.7) and producing his second-best totals in yards passing (4,593) and TDs (39).

"This really has been a fulfilling road to this point," Luck said. "I'm not satisfied. We certainly have business to take care of."

The defense also came up big.

Rookie Darius Leonard led the league in tackles with a franchise-record 163 and Indy has allowed just 16.4 points over its past eight games, prompting some to conclude that Reich may have found his magical touch just in time for another playoff run.

Reich, though, is simply sticking to the plan.

Notes: Indy signed safety Rolan Milligan to the practice squad and released linebacker Tegray Scales. ... The Colts also signed guard William Poehls to a reserve/future contract. The 6-foot-8, 344-pound offensive lineman was on Jacksonville's active roster in 2017, but was waived by the Jaguars on Sept. 1.