Resilient Pierre-Paul excited to be back in Super Bowl 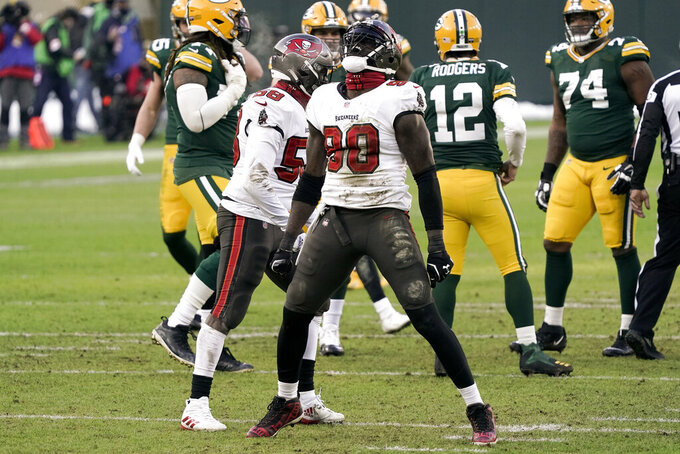 TAMPA, Fla. (AP) — Nine years and a pair of career-threatening injuries later, Jason Pierre-Paul is back in the Super Bowl and ready to wreak havoc.

This time, he’s trying to help the six-time champion win a record seventh ring in the 43-year-old quarterback’s first season with the Tampa Bay Buccaneers.

Pierre-Paul, traded from the Giants to the Bucs three years ago, is one of just six players on Tampa Bay’s roster with previous experience on football’s biggest stage, where the Bucs will face the Kansas City Chiefs.

He wants his young teammates to embrace the moment and understand that regardless of how talented they are, the road back to another Super Bowl will not be easy.

“It took me nine years to get back to this point. Every year I played well. I played great. I put up numbers. I do exactly what I need to do to be a great player, be elite,” the 32-year-old linebacker added. “But that’s not going to get you to the Super Bowl.”

Pierre-Paul’s journey has been more difficult than most.

In addition to the usual bumps, bruises and assortment of football injuries that come with playing 11 seasons in the NFL, the defensive stalwart also overcame a pair of scary offseason accidents that could have ended his career.

Pierre-Paul lost an index finger in a July 4 fireworks mishap that also damaged the thumb and middle finger on his right hand in 2015 while he was still playing for the Giants.

He suffered a fractured neck in an automobile crash that sidelined him for the first six games of the 2019 season with Tampa Bay. He not only returned to play the final 10 games, but finished with 8½ sacks as the Bucs laid the foundation for an improved defense that’s helped Brady reach his record 10th Super Bowl.

Pierre-Paul was asked this week about his resilience.

“I been through a lot and the things I go through, I just stick with happy thoughts. My father was blind at age of 30, 31 and me being born and he having to look after me when my mom was working. He never quit. To this day he’s still happy and joyful, and happy I am in another Super Bowl,” Pierre-Paul said.

“To those people who are facing something — six years ago I went through a hand injury, fireworks injury. Last year I had a broken neck,” he added.

“People say you can’t do it because they can’t do it. But you put your mind to it, you can do whatever you want to do in life. It’s easier said than done, but I never quit on anything in life. I am going to give everything I can until you can’t, knowing you can’t.”

Pierre-Paul had 58 sacks in eight seasons with the Giants. He’s added 30½ in three years with the Bucs, including 9½ this season when he led the team and was the only Tampa Bay player selected for the NFC Pro Bowl team.

“It’s amazing. Jason is a medical, genetic freak, the way he can bounce back from severe injury with what he did after his hand injury. But that car wreck, I I was just happy he was going to be able to walk. Football was the furthest thing from my mind,” coach Bruce Arians said.

“He told me: ‘I’ll be back.' Low and behold his first play back he gets a sack,” Arians added. “He is a rolling ball of energy every single day. He’s the best guy at playing injured and being tough that I know.”

Pierre-Paul had two of Tampa Bay’s five sacks of Aaron Rodgers in the Bucs’ 31-26 victory over Green Bay in the NFC championship game.

He generated more headlines on Super Bowl media day when he said, “I didn’t even know who that was,” about Mike Remmers, who has moved to left tackle on Kansas City’s reshuffled line since the Chiefs lost Eric Fisher to an injury in the AFC championship game.

Pierre-Paul said he’s not thinking about who’s going to be across from him, blocking his path to Patrick Mahomes.

“I’m going to do what I need to do. ... That’s a you problem. They gotta figure that out,” the linebacker said. “I’m coming to play a football game.”

For the record, Remmers said he doesn’t care about Pierre-Paul’s opinion, or lack thereof.

“Every week I’ve played in this league, I’ve never gone into a game thinking, ‘Hey, I wonder what this guy thinks of me?’ I don’t care at all. It makes no difference to me,” said Remmers, a ninth-year veteran who has been with eight different organizations and will start his 10th career playoff game, including a second Super Bowl. “I’m just going out there to do my job.”