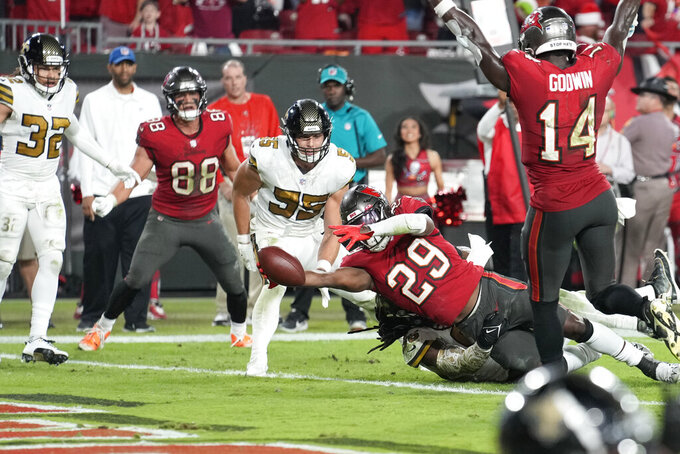 Tampa Bay Buccaneers running back Rachaad White (29) scores on a touchdown reception in the second half of an NFL football game against the New Orleans Saints in Tampa, Fla., Monday, Dec. 5, 2022. (AP Photo/Chris O'Meara)

For New Orleans' struggling first-year coach, a 17-16 loss at Tampa Bay on Monday night exemplified as much as any game this season why the Saints (4-9) are more in need of targeted refinements than a major reconstruction.

New Orleans kept Tom Brady and the Buccaneers out of the end zone for about 57 minutes before allowing two touchdowns — and losing a 13-point lead — in the final three.

An unlikely series of blunders had to occur in a short time for the Saints (4-9) to lose a game which, had they won, would have pulled them a half-game behind the Buccaneers (6-6) for first place in the NFC South.

It began with Mark Ingram tweaking his knee with a first down easily within reach and hobbling out of bounds a yard short on second down, stopping the clock with less than six minutes left.

“Obviously, it was a big play," Allen said. "We all, looking back, would have hoped that maybe he would have been able to get that first (down).”

The Saints then opted to throw on third and 1. An incomplete pass stopped the clock again and led to a punt.

“We hadn’t run the ball that effectively up to that point so I don’t know if there was a ton of confidence in our ability to run the football there," Allen said. But the coach conceded that even a failed run would have burned more time in a game that saw the Bucs' winning score come with just 3 seconds left.

"That’s probably one that I’d like to have back,” Allen said.

After the punt, the Bucs were near midfield when cornerback Paulson Adebo committed a 44-yard pass interference penalty that set up the Bucs' first TD.

Tampa Bay receiver Mike Evans “got behind us on a second and 20 and that was a huge play," Allen said.

With one more chance to bleed the clock, the Saints couldn't get a first down. They came close when Andy Dalton's deep seam throw landed in tight end Taysom Hill's hands, only to be jarred loose by a big hit.

“There were some opportunities that we didn’t come down with the ball," Allen said, alluding not just to Hill's play, but also to several uncontested drops earlier in the game. “Some of it was good plays by their defense, but I just got a lot of faith in our guys that they can make those plays. That’s something that we can do and we can be better at.”

Now the Saints are 2 1/2 games out. By virtue of two losses to Tampa Bay, they must finish ahead of the Bucs to win the division. Mathematically, it's possible, but not realistic.

“We let an opportunity slip through our hands," Allen said. "We have to be better from it.”

The kicking and return game. The Saints downed three punts inside the Tampa Bay 14, including one inside the 10. Wil Lutz was good on all three of his field-goal attempts and his lone point-after kick. New Orleans also had nearly 90 return yards on kickoffs and punts.

The Saints continue to commit penalties that either hinder their own scoring chances or create chances for opponents. There were also a couple of uncharacteristic lapses by receivers Chris Olave and Jarvis Landry, who each dropped passes in the red zone. Also troubling for New Orleans was Ingram failing to get a first down and the defensive breakdown that led to Adebo's long interference penalty.

Shaheed, an undrafted rookie, has become a more prominent player on offense and special teams by the week. He led the Saints with 74 yards receiving on four catches, added 59 kickoff return yards on two returns and returned a punt 30 yards.

Alvin Kamara had 37 yards rushing and receiving combined, his fifth straight game with fewer than 100 yards from scrimmage and his third game in that stretch with fewer than 50.

“Defenses are keying on him, obviously,” Allen said. “We’ve got to find ways to get him the ball where he can be effective. That’s something we have to look at as a coaching staff.”

The Saints are still awaiting the return of cornerback Marshon Lattimore (abdomen), who has now missed eight straight games without going on injured reserve. Safety P.J. Williams has a knee injury from Week 12 that kept him out at Tampa Bay. Linebacker Zack Baun injured his ankle at Tampa Bay.

1 — The number of losses New Orleans can have in its last four game before reaching double-digit losses for the first time since 2005 (3-13), the year before coach Sean Payton and quarterback Drew Brees arrived.

The Saints enter their bye week before returning to action at home against Atlanta on Dec. 18.