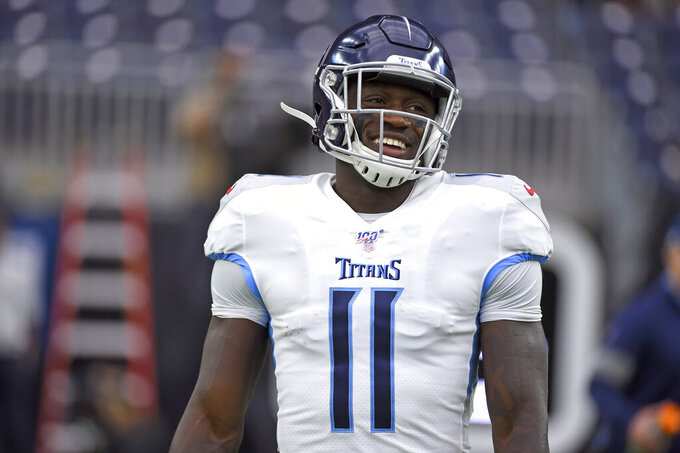 FILE - In this Dec. 29, 2019, file photo, Tennessee Titans' A.J. Brown (11) warms up before an NFL football game against the Houston Texans in Houston. Titans wide receiver A.J. Brown led all rookies in receiving yards despite working with quarterback Ryan Tannehill for only 10 games. Now Brown is going into his second season ready to show what he can do with a full 16-game schedule as Tennessee's top receiver. (AP Photo/Eric Christian Smith, File)

Otherwise, NFL coaches and players will find — and exploit — every flaw.

“It's always something that comes up that you didn't know that was a weakness, and you just got to work through it,” Brown said Monday in recalling the advice Brady gave him last August. “And it's day to day. It never stops. It's day to day, and you find something new to work on each and every day.”

That's the motivation Brown is using to follow up his impressive debut season.

Brown led all rookies with 1,051 yards receiving and tied for the rookie lead with eight touchdown receptions. His performance helped him finish third in voting for The Associated Press' NFL Offensive Rookie of the Year award won by Arizona's Kyler Murray.

The No. 51 pick overall out of Mississippi will have a chance to improve on those numbers if he has an entire season with Ryan Tannehill as the Titans' quarterback. Tannehill started only 10 games in 2019 after taking over as the starter, and four of Brown's five 100-yard receiving games came in that stretch.

Tannehill certainly has high expectations for a receiver he's excited just to call a teammate.

“He’s a guy who is extremely talented,” Tannehill said. “We saw that last year. Coming into year two, he’s hungry, he’s excited about the opportunity we have. He’s worked extremely hard this offseason. ... He’s running really well right now, and I’m excited to see what he does this year.”

Brown doesn't shy away from high goals and expectations. He mentions names like seven-time Pro Bowl receiver Julio Jones and Michael Thomas, the AP offensive player of the year, when asked how he might react now that defenses have film of Brown to study.

“You still got to go out and finish,” Brown said. “And that's my approach with it regardless of the film and what I did last year. Like nobody care about that. You've got to come out and play every week, and that's what I learned last year.”

The 6-foot, 226-pound receiver has a list that he's been working on all year to make sure he does improve, including his conditioning and consistency when running his routes.

“The fourth quarter is big," Brown said. "Looking back on some film, I left some plays out there because I was a little tired or something like that. So just trying to just be all-around complete and leave nothing out there.”

Brown's focus on working out and strength during the offseason is something he didn't get in 2019 with all the visits and trips before the NFL draft.

“I had time to really get my feet up under me,” Brown said. “Really put in the work and get myself in the best shape as possible coming into camp because you now it’s only going to get tougher. We’re going to Denver (Sept. 14 for the Titans' opener). The air is really thin up there.”

The wide receiver also is trying to run each route the same with the exact same pad level to avoid tipping off defensive backs.

“Just not put on your turn signal before you turn,” Brown said.

Brown has the potential to lead the league in both yards receiving and touchdown catches this season. Brown said he never shares his personal goals before a season.

“But why not? Why not me?” Brown said of leading the NFL in those categories. "That’s my approach with anything.”

NOTES: The Titans placed OLB Josh Smith on Reserve/COVID-19 on Monday, the list for players who either test positive or quarantined after being in contact with an infected person.