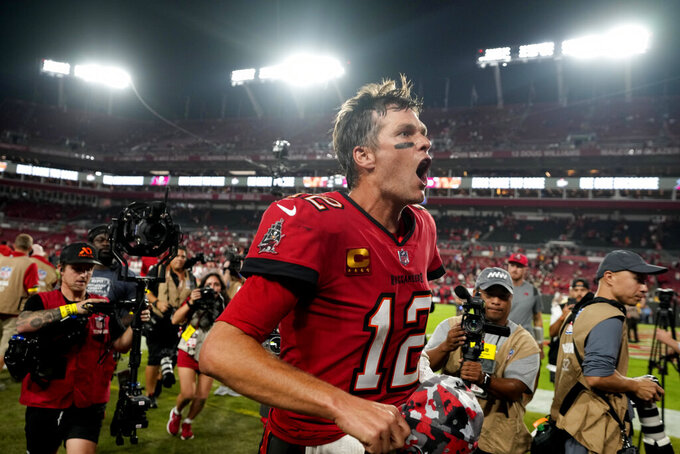 Tampa Bay Buccaneers quarterback Tom Brady (12) reacts to the fans as he runs off the field after an NFL football game against the New Orleans Saints in Tampa, Fla., Monday, Dec. 5, 2022. The Buccaneers won 17-16. (AP Photo/Chris O'Meara)

TAMPA, Fla. (AP) — Tom Brady still has a knack for pulling off the improbable.

The seven-time Super Bowl champion’s NFL-record 44th fourth-quarter comeback enabled the Tampa Bay Buccaneers to avoid falling two games under .500 and create a little breathing room for themselves atop the NFC South.

That could wind up being crucial with the Bucs (6-6) heading into a tough two-game stretch that has them traveling to NFC West-leading San Francisco this weekend before hosting defending AFC campion Cincinnati the following Sunday.

Brady was on the verge of being held without a touchdown pass at home by the Saints for the third straight year when he threw for a pair of TDs in the final three minutes to beat New Orleans 17-16 on Monday night.

It was the second time in a month the 45-year-old quarterback shrugged off an ugly 3½ quarters to leading a game-winning drive in the closing seconds. The Bucs beat the Los Angeles Rams 16-13 on Nov. 6.

“In the NFL you’re not going to blow a lot of people out. We won a lot of close games when we won the Super Bowl (two years ago) as well,” coach Todd Bowles said Tuesday.

“Every year it’s going to come down to a score or two. ... If you win enough of them consistently, they’ll start turning into larger (margins) and the confidence grows,” Bowles added. “It’s going to be a dogfight every week from here on out.”

Brady broke a tie with Peyton Manning for the most fourth-quarter comebacks in NFL history. It was the 56th time he’s led a winning drive in the fourth quarter or overtime — another league record — as well as the 40th time he’s overcome a deficit of 10 or more points to win.

“It all starts with the quarterback. He can dissect things. He’s seen it plenty of times. I guess the urgency clicked in moreso in the two-minute (offense), being down that way,” Bowles said. “Guys just locked in. You want to do that the entire game, but unfortunately that didn’t happen. We’re just glad we got it in the end.”

The first-place Bucs hold a 1½-game lead over Atlanta (5-8) in a tight division race in which none of the teams has a winning record.

Despite playing without three injured starters in the secondary, the defense limited the Saints to one touchdown. The ability to force Andy Dalton to settle for field goals on three drives deep into Tampa Bay territory allowed the Bucs to hang into the game until Brady could get the offense going.

The Bucs are averaging just 18 points a game. They swept the season series with the division-rival Saints, however they didn’t score a touchdown until the fourth quarter of both victories.

Rookie tight end Cade Otton is developing into a reliable option for Brady. He had a season-best six receptions for 28 yards on Monday night. His first career TD catch beat the Rams last month; his second trimmed a 13-point deficit to 16-10 against the Saints.

Although rookie Rachaad White, who caught the winning TD pass with 3 seconds left, has assumed a bigger role in the offense, it doesn’t necessarily mean the Bucs are down on veteran running back Leonard Fournette, who rushed for a team-high 49 yards on 10 carries and had six receptions for 32 yards Monday night.

“I think we have two great backs, so we’ll keep using them both,” Brady said. “Whoever’s in there, I’ve got confidence in.”

Cornerback Sean Murphy-Bunting (quadriceps) and safeties Antoine Winfield Jr. (ankle) and Mike Edwards (hamstring) sat out Monday night. Bowles said it was too early to speculate on whether they will play this week.

65. Wide receiver Chris Godwin has the third-most receptions (65) in the league since Week 4 behind Miami’s Tyreek Hill (75) and Minnesota’s Justin Jefferson (70). He has six or more catches in a franchise-record nine consecutives games.

The 49ers, who lost injured quarterback Jimmy Garoppolo for the season last week, have won five in a row. Joe Burrow and the Bengals have been hot lately, too, winning four straight to get their season back on track.