Undefeated Cardinals down at least 2 starters vs. Browns 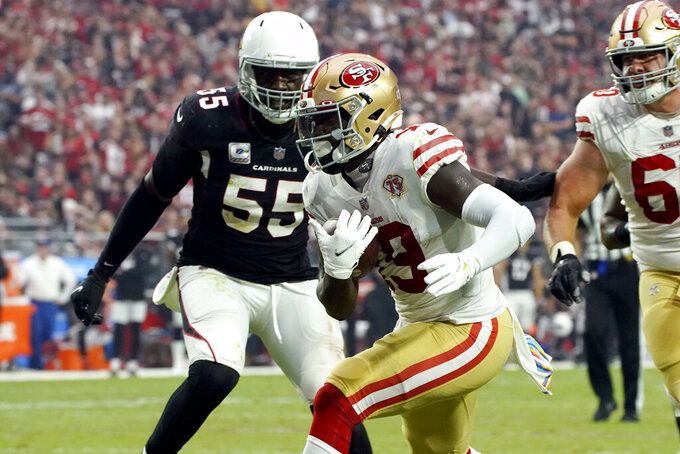 TEMPE, Ariz. (AP) — The Arizona Cardinals will be without two starters — and probably a third — when they try to stay unbeaten Sunday in a road game against the Cleveland Browns.

Cardinals coach Kliff Kingsbury confirmed tight end Maxx Williams is out for the season because of a right knee injury he suffered last week in the team's 17-10 victory over the San Francisco 49ers. He also said three-time Pro Bowl center Rodney Hudson (ribs) will miss the Browns game, while linebacker Chandler Jones is doubtful after testing positive for COVID-19 on Tuesday.

Kingsbury said Jones was experiencing symptoms and it "would be a stretch” to expect the linebacker to return in time for the Browns game.

The 31-year-old Jones has been is one of the league's elite pass rushers and was the Week 1 NFC Defensive Player of the Week after a five-sack performance against the Tennessee Titans.

“That’s just the way it goes,” Kingsbury said. “We’ve been fully vaccinated now for a while. It’s unfortunate, particularly for Chandler, who was really playing at a high level. Hopefully he can get well rested and be back by next week’s game so we’ll see how it plays out.”

The Cardinals have a 5-0 record for the first time since 1974 and feature one of the NFL's best offenses. The 6-foot-4, 252-pound Williams had been a big part of that and was on pace for a career year with 193 yards receiving through five games.

Williams was injured after his right knee buckled at the end of the run that resulted in a 14-yard reception.

Hudson was one of Cardinals' key offseason signings after coming from the Las Vegas Raiders. The 11-year veteran has quickly turned into a team leader in Arizona with teammates and coaches raving about his physical and mental talent.

“I'm not sure if you can replace him as far as helping the plays being effective,” Kingsbury said. “He was such a great presence for us in the pass protection and the run game. It's hard to account for not having him in there.”