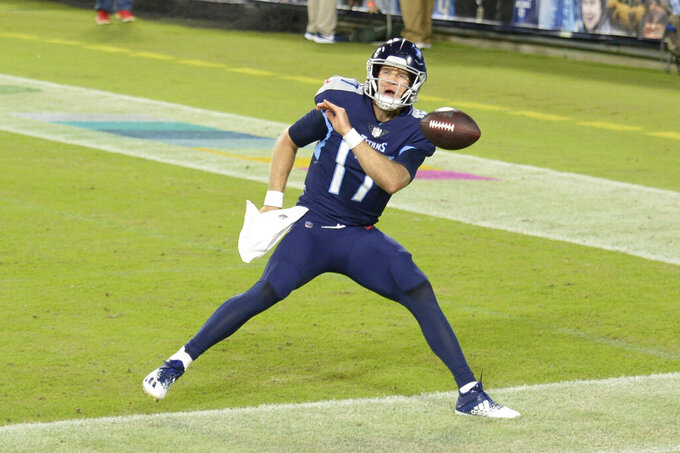 Tennessee Titans quarterback Ryan Tannehill (17) celebrates after scoring a touchdown against the Buffalo Bills on a 10-yard run in the first half of an NFL football game Tuesday, Oct. 13, 2020, in Nashville, Tenn. (AP Photo/Mark Zaleski)

NASHVILLE, Tenn. (AP) — The Tennessee Titans keep proving adversity simply makes them tighter and stronger with a toughness that helps them win.

After a 16-day layoff dealing with the NFL's first COVID-19 outbreak, the Titans (4-0) sit atop the AFC South and are tied with Pittsburgh on top of the AFC as one of the NFL's four remaining undefeated teams.

“We went through a lot these last two weeks, you know, dealing with this virus,” Titans cornerback Malcolm Butler said. “I just think it made us closer. It made us play for each other and go out there and play hard for each other and just get the win, man. It’s all about winning.”

The Titans were limited to one light practice that was more of a walk-through, with coaches filling in as defensive backs, and two walk-throughs since beating Minnesota on Sept. 27. They handed Buffalo its first loss this season 42-16, the easiest victory yet after Tennessee's first three wins by a combined six points.

Quarterback Ryan Tannehill says the Titans are a little ticked off at how they've been looked at over the past couple weeks, and stuck together. They know they have plenty to clean up.

“We just need to continue pushing the envelope and getting better,” Tannehill said.

The Titans showed last season they could put up points in bunches and haven't stopped. They now have scored at least 31 points in three straight games and are averaging 30.5 points per game this season, which ranks sixth in the NFL. They've scored 122 points through four games, the most ever by this franchise, topping the 121 points by the 1989 Oilers.

Their scoring is boosted by their execution inside an opponent's 20-yard line. Tennessee ranks second in the NFL scoring touchdowns on 82.3% of its trips.

They scored a touchdown on all six trips inside the red zone, didn’t have a turnover and also didn’t allow a sack. The Titans became the first NFL team to have that combination, with a minimum of six such drives, since Week 11 of 2007 when the Patriots beat the Bills 56-10.

The defense. The Titans have been without starting cornerback Adoree Jackson from the start of the season, and he remains on injured reserve. Luckily, they got lineman DaQuan Jones back against Buffalo. But this unit ranks 29th in yards allowed, 27th against the run and last in the NFL on third down.

Their saving grace? Tennessee is ninth in points allowed, giving up 22.5 per game.

Butler. The Titans cornerback bounced back after struggling in Minnesota, getting two interceptions, including one on the Bills' first pass of the game. Butler finished with 97 return yards off those picks to set up two short touchdown drives.

Nit-picking because defenses have been stacking up to stop the 2019 NFL rushing leader first, forcing Tannehill to beat them through the air. Derrick Henry is third this season with 376 yards rushing and has run for two TDs in consecutive games. But he is averaging only 3.7 yards a carry.

His stiff arm needs no help after Henry made Bills cornerback Josh Norman his latest victim.

“I’ve been doing too many curls,” Henry said with a smile. “I’ve got to lay off the arms.”

Left tackle Taylor Lewan left the game after appearing to aggravate the shoulder injury that knocked him out early in the win over Minnesota. The Titans still have seven players on the reserve/COVID-19 list, a group including receivers Corey Davis and Adam Humphries and defensive lineman Jeffery Simmons.

They also added offensive tackle Isaiah Wilson, their first-round draft pick, off a roster exemption after the rookie had been on the reserve/COVID-19 list since Sept. 6.

8 — The Titans lead the NFL with a plus-8 turnover margin. They have forced nine turnovers this season with only one giveaway.

Tennessee has a short week before hosting Houston (1-4) on Sunday. Then the Titans will wrap up a three-game homestand with another AFC showdown with Pittsburgh due to visit in a game rescheduled from Oct. 4 to Oct. 25 due to Tennessee's COVID-19 outbreak.