49ers head to new home in Arizona to host Bills 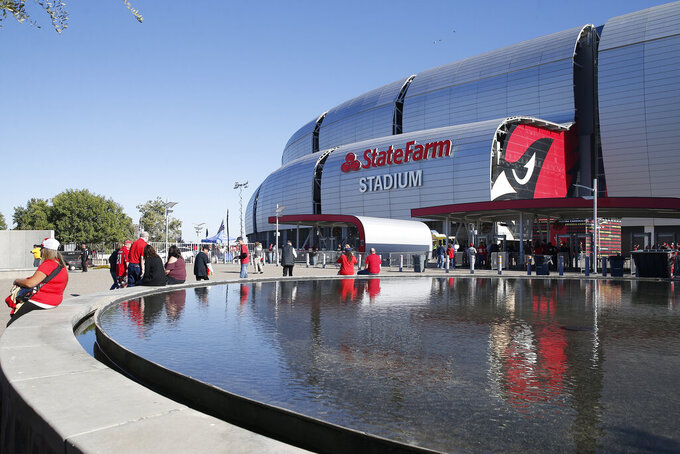 FILE - In this Thursday, Oct. 31, 2019, file photo, fans arrive prior to an NFL football game between the Arizona Cardinals and the San Francisco 49ers, in Glendale, Ariz. The San Francisco 49ers are set to embark on an unusual three-week road trip after being kicked out of their stadium and practice facility because of strict new COVID-19 protocols in their home county in Northern California. The Niners will fly to Arizona, where they will practice, live and play their next two games after Santa Clara County imposed a three-week ban on games and practices for contact sports. (AP Photo/Rick Scuteri, File)

The San Francisco 49ers will need to get used to their temporary new home, while the Buffalo Bills will try to put aside the bad memories from their most recent trip to Arizona.

The Niners have relocated to Arizona for three weeks after strict new COVID-19 protocols in their home county prohibited contact sports and practices.

So San Francisco (5-6) packed up its entire operation and headed to the desert where it's practicing and playing the next two “home” games at the Arizona Cardinals stadium in Glendale, starting with Monday night’s matchup against the AFC East-leading Buffalo Bills (8-3).

“This entire year has been kind of odd, kind of strange,” 49ers linebacker Fred Warner said. “There’s been a lot of change, a lot of different things from a regular NFL season. So this kind of just fits right in.”

The Bills are returning to the site of their most heartbreaking loss of the season, and know walking into the stadium will lead to some unpleasant flashbacks.

Buffalo visited Arizona three weeks ago and appeared poised for a big road win after Josh Allen threw a go-ahead 21-yard TD pass to Stefon Diggs with 34 seconds left. But the Cardinals responded, winning the game on the memorable “Hail Murray,” the 43-yard desperation heave from Kyler Murray that DeAndre Hopkins leaped over three defenders to grab for the winning score in a 32-30 victory.

“When we show up to the stadium, we’ll know obviously what happened last time we were there,” linebacker Tremaine Edmunds said. “Not so much looking back but we’re motivated, motivated to get back there and kind of redeem ourselves. I know it’s a different team but at the same time in that stadium. ... We know what happened the last time we played there, so we’ll use it for motivation.

NOT READY FOR PRIME TIME

Night-time hasn’t been the right time for Buffalo. The Bills are 6-23 in prime-time games since 2000, and have lost nine straight on Monday night since a 23-18 win at Miami on Oct. 4, 1999. Buffalo is 0-2 in night games this season, with losses at Tennessee, in a COVID-19 rescheduled Tuesday night outing on Oct. 13, and Kansas City the following week.

The Bills’ most recent prime-time victory came last season, when they clinched a playoff berth with a 17-10 win at Pittsburgh on Dec. 15, a Sunday. Buffalo is scheduled to play two more night games, hosting Pittsburgh on Dec. 13, and at New England on Dec. 28.

The Niners' offense got a big boost when physical receiver Deebo Samuel returned after missing three games with a hamstring injury. Samuel caught 11 passes for 133 yards and once again did his biggest damage after the catch. Samuel is averaging 12.9 yards after the catch this season, the best of any qualified receiver, although 19 of his 27 catches have been on passes behind the line of scrimmage.

“He’s one of the best football players I’ve been around,” coach Kyle Shanahan said. “It doesn’t matter how good it is or how good it looks, he’s going to get it done.”

Bills offensive coordinator Brian Daboll has dug into his bag of trick plays the past two outings. Receiver Isaiah McKenzie faked a run before stopping to complete a 12-yard touchdown pass to Josh Allen for Buffalo’s opening score in the loss at Arizona. Last weekend, Allen lateraled to receiver Cole Beasley, who pulled up and lobbed a 20-yard touchdown pass to rookie receiver Gabriel Davis.

Referring to Davis’ touchdown, Daboll revealed Buffalo had the same play called against Arizona, but Allen made a change at the line of scrimmage, which led to him hitting Beasley for a 22-yard TD.

“You try to call it in a timely fashion when you think it has a chance to work. Then you gotta trust the players,” Daboll said. “You do it at practice and you work on them. If they look good then you keep them in, and when the time is right you call them.”

The 49erss are trying their best to stay in the playoff race until they might get a late-season push from the possible return of quarterback Jimmy Garoppolo and 2019 All-Pro tight end George Kittle for the final two games. Backup QB Nick Mullens has done a capable job in relief of Garoppolo, leading a big win last week on the road against the Los Angeles Rams.

“I was very happy with him,” Shanahan said. “I thought he protected the ball well. I know he had that unfortunate pick while off the tip, but he also made some plays for us, too.”

Sean McDermott is set to become Buffalo’s fourth coach to make it to 60 games. He’ll join Hall of Famer Marv Levy, Chuck Knox and Lou Saban, who needed two stints in Buffalo to get to 60. With a 33-26 regular-season record, McDermott ranks fourth among Bills coaches in career wins, and four shy of matching Knox (37-36). McDermott ranks third in wins among Buffalo coaches through their first 59 games. Saban was 37-19-3, Levy 34-25 and Knox 29-30.