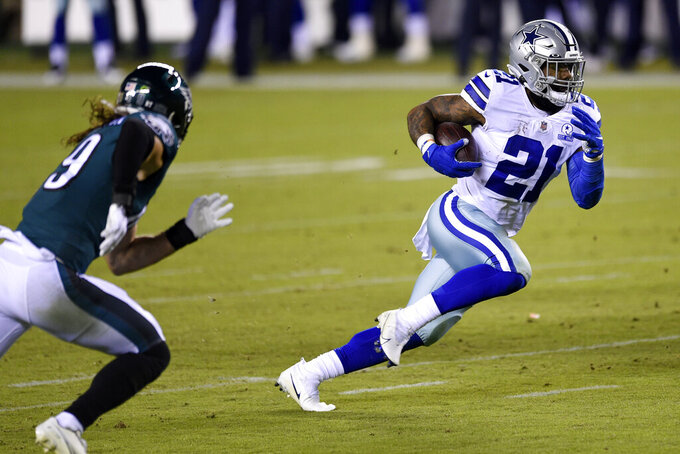 Dallas Cowboys' Ezekiel Elliott rushes during the first half of an NFL football game against the Philadelphia Eagles, Sunday, Nov. 1, 2020, in Philadelphia. (AP Photo/Derik Hamilton)

The two choices to start for the Cowboys don't have 10 between them.

Put that high on the list of reasons Dallas is the biggest underdog it has been at home in 31 years with the undefeated Steelers visiting Sunday.

“You have to keep forging forward because there is always a path to victory,” Cowboys coach Mike McCarthy said. “I understand what our record is. We had some areas of improvement in our last game. We need to build off of that.”

The Cowboys (2-6) will start their fourth quarterback of the season after star Dak Prescott’s season ended with a broken ankle and Andy Dalton went from one protocol to another — concussion to COVID-19.

Regardless of McCarthy's choice, it will be the first career start for Garrett Gilbert or Cooper Rush, just as it was for rookie Ben DiNucci last week after Dalton's concussion.

DiNucci was so overmatched in a 23-9 loss to the Eagles, McCarthy decided the experience of just being in the league for Gilbert and Rush was a better bet against a nearly two-touchdown favorite than giving DiNucci another shot.

Drafted in 2014, Gilbert has thrown just six passes while bouncing around — and sometimes out — of the league. Rush had three pass attempts in three seasons as Prescott's backup before he was waived in the offseason after the Cowboys signed Dalton, who started for nine years in Cincinnati.

Gilbert was signed off Cleveland's practice squad after Prescott's gruesome injury, and Rush rejoined after Dalton went down two weeks ago against Washington. Rush was let go by the Giants in September.

“Obviously this is an awesome opportunity,” said Gilbert, the former Texas quarterback whose college career ended nearby at SMU. "You’d love for it to be under different circumstances. Obviously hoping Andy gets back as soon as possible and gets well soon, but I’m excited about it.

“I think Cooper’s in the same boat. Whoever’s name is called Sunday, we’re both going to be excited about the opportunity. We’re getting ready to win a game, so the two of us are preparing the best we can together.”

Roethlisberger, who missed all but two games last year because of elbow surgery, has a proud franchise on the verge of a club-record eighth straight win to start the season. The only other time the Steelers were 7-0, they won the third Super Bowl title to finish the 1978 season — the second of two championship victories over the Cowboys in the 1970s.

Pittsburgh is wrapping up three straight road games with the first of three in a row against teams with a combined 5-17-1 record (Cincinnati and Jacksonville are next). The previous three opponents had one or no losses after Week 6 (Cleveland, Tennessee and Baltimore). The last team to run such a gauntlet was Super Bowl-winning New England in 2004.

“The last two weeks have been just draining games,” Roethlisberger said. “We might be drained during the week and whatnot, so this is one of those weeks where you mentally focus on the preparation in terms of the meeting time and things like that. When Sunday comes, you can be as tired as you want during the week, you have to dial it in and get ready to go.”

The Cowboys have lost all three games not started by Prescott, and haven't scored a touchdown in the past two. Now they face a defense that leads the NFL with 30 sacks and is third with 10 interceptions.

“I don’t really know how to categorize ‘rah-rah speech,'” McCarthy said. “I talk to the football team very direct and honest and with a high level of emotion in our team meetings.”

The NFL’s second-ranked run defense got pushed around against the Ravens, who piled up 265 yards on the ground, the most the Steelers have allowed in over two decades. Tomlin allowed the Steelers “bled, and bled badly” while Baltimore controlled the clock for long stretches in the Steelers' 28-24 win.

The Cowboys likely need a standout performance from Ezekiel Elliott to have any chance to spring the upset. And Tomlin knows it.

“He’s an elite, elite running back, arguably the best in the business,” Tomlin said of the two-time rushing champion who was limited in the two most important practices of the week with a hamstring injury.

At the same time, the Steelers have been effective this season when facing high-profile backs. New York Giants star Saquon Barkley was limited to 6 yards on 15 carries in the season opener, and Tennessee’s Derrick Henry was held to 75 yards in a victory over the Titans last month.

JUJU ON THAT BEAT

While Roethlisberger has made it a point to spread it around, he has consistently found JuJu Smith-Schuster when things get tight. Smith-Schuster caught all eight of his passes in the second half against the Ravens, including two tough third-down receptions in which he bulled his way for enough yardage to extend what became scoring drives.

“Third down gets you paid,” Smith-Schuster said. “You make those crucial catches that are going to get you first downs, move the sticks. The dirty work. I love doing the dirty work, I love going inside, bang-bang catches, running across the middle and not being afraid to get hit. I do embrace those balls down the middle.”