Column: Goodell's mea culpa is a good start - and no more 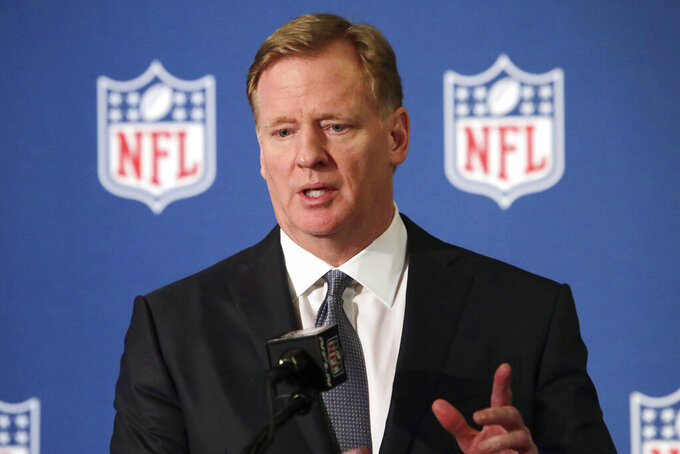 FILE - In this Dec. 12, 2018, file photo, NFL commissioner Roger Goodell speaks during a news conference in Irving, Texas. Coaches will be allowed to return to NFL team facilities beginning Friday as the league continues preparation for training camps and its season. Commissioner Roger Goodell told the 32 clubs on Thursday, June 4, 2020, that coaching staffs may from team complexes starting Friday. (AP Photo/LM Otero, File)

Never thought we’d see the day when typing the words “Roger Goodell” and “daring” in the same sentence wasn’t the setup for a punchline. But here we are.

Four years after piling on a few dozen men who were already down — on one knee — the NFL commissioner posed in front of a camera in his living room, swapped his suit and tie for a sackcloth and ashes and delivered a minute-long video mea culpa.

Not surprisingly, many of the words Goodell spoke were practically dictated by nearly 20 of the league’s black players in a video of their own released just a day earlier. In any case, the daring part comes at the end, where Goodell tacked on some of his own after consulting with only a “select few” of the league’s 32 owners.

“We are listening, I am listening,” he concluded, “and I will be reaching out to players who have raised their voices, and others on how we can move forward together for a better and more united NFL family.”

It’s going to be a heavy lift. A “more united NFL family” would require a “somewhat united NFL family” in the first place — and the current one looks like anything but. Three-quarters of the players are people of color, but just four head coaches, two general managers, and one owner, Shad Khan of the Jacksonville Jaguars, are.

Uncomfortable as those numbers should make Goodell, there was no sidestepping this issue at this moment. In the two weeks since George Floyd’s death in Minneapolis was captured on video, cities large and small have convulsed in a nationwide protest highlighting police brutality against black people. NFL players, and athletes across the sports world, have added their voices to the cause and amplified the clamor.

So if Goodell learned anything from his “come-to-Jesus” moment, it better be that listening is only half the battle. The rest requires real change and accountability, and the failure of the league’s Rooney Rule and a handful of similar initiatives to bring minority candidates into positions of real power speaks for itself.

It’s not like Goodell’s track record on other big issues — concussions, domestic abuse to name two — should inspire much confidence, either. Then there’s the political leanings of the NFL owners, a number of whom gave big bucks to a president who falsely equated the players’ protests with disrespect for the flag and national anthem, then bashed the owners for not having the guts to fire every one of them. Just a guess, but that Twitter account will probably be on full blast-furnace mode just about the time the league’s opening kickoff is floating in the air.

Exactly how Goodell balances those competing interests is anyone’s guess. It may be telling that the people who pay his princely salary haven’t said much in public about backing him. They love that league revenues have jumped from $6 billion when Goodell took over in 2006 to $15 billion last season, and if making it rain was the only measure of success, he’d be lionized. Instead, he’s fricasseed by players and fans nearly every time he ventures outside for missteps large and small, from a petty legal feud with Tom Brady over “Deflategate” all the way up to his still-inconsistent policies regarding player safety.

A few years ago, several owners expressed their dissatisfaction with that part of Goodell’s job performance, telling SI.com’s Peter King they were tired of seeing “the public face of the most successful sports league in American history gets more tomatoes thrown at it than any other commissioner in the history of the NFL.”

Like it or not, they better get used to it. Goodell just put the lot of them on the hook to solve a problem that’s defied easy solutions since the beginning of time. A more equal version of the NFL won’t be achieved with videos, rule changes, sloganeering or any of the usual half-measures in the league’s bag of tricks.

People are mad, and they’re determined to see real change, and limited as the NFL’s role might be in the larger picture, without it, tomatoes might be the least enduring stain on its reputation.