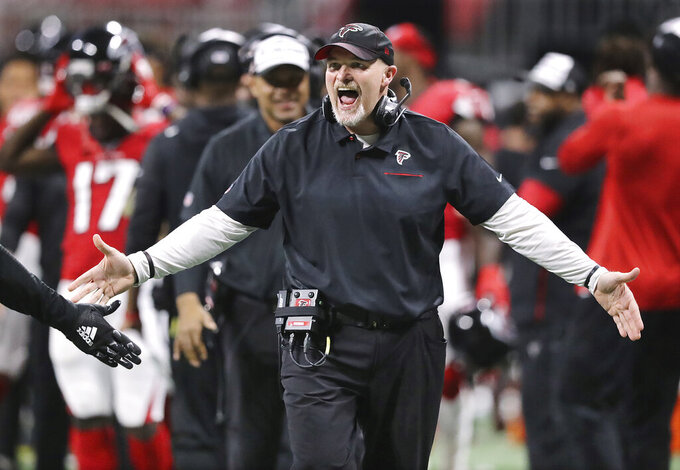 Atlanta Falcons head coach Dan Quinn speaks to players during the first half of an NFL football game against the Jacksonville Jaguars, Sunday, Dec. 22, 2019, in Atlanta. (Curtis Compton/Atlanta Journal-Constitution via AP)

FLOWERY BRANCH, Ga. (AP) — Dan Quinn can't wait for the chance to prove he has learned from mistakes made in 2019.

Blank believes so strongly that the path to consistent winning is found in patience with coaches that he is sticking with Quinn following two losing seasons packed with wild streaks of inconsistency.

Blank said he was impressed Quinn made bye-week changes, including removing himself from calling defensive plays, that led to a turnaround following a 1-7 start.

Quinn described the 2019 season, his fifth as Atlanta's coach, as “the hardest and most invaluable year for me as a coach ever."

“I've made mistakes, and we get to fix them, and I think that's an important thing," Quinn said. “... Not everybody else always has the chance to do that. I certainly hate the results, but man, I learned a lot, and I'd say more than anything, I can't wait to apply the things that I've learned with this team and moving forward."

Quinn has one more year that brings a mandate for improvement. He said he understands 2020 comes with an “urgency to do really well."

“But what has to change is the results, and I think everybody in the building knows that," he said.

Blank said he didn't want to be an owner who makes "surface noises of changing coaches to create some buzz in the marketplace."

He said consistent winners are "organizations that maintain a continual relationship between a head coach and general manager over time."

Blank didn't need to see Sunday's final game at Tampa Bay to announce his decision to bring back Quinn and Dimitroff. The Falcons (6-9) have won five of seven, including three straight.

Quinn benefited from the support of his players, most notably Julio Jones. After the Falcons' fifth straight loss, an ugly 37-10 decision to the Los Angeles Rams, Jones came to Quinn's support in a rare locker-room speech.

“Not every coach gets to see his team fight for him and say they are, and I thought that's very humbling for sure," Quinn said.

“I'm grateful coach Quinn is coming back," Allen said. “That's what I've been fighting for."

Quinn has a record of 42-37. In the 2016 season, he led the team to only the second Super Bowl appearance in franchise history, where the Falcons blew a 28-3 lead before losing to the New England Patriots in overtime.

Atlanta made another playoff appearance in 2017. In 2018, the Falcons' hopes of a third straight playoff season under Quinn were devastated by a 4-9 start. That team finished with three straight wins for a 7-9 final record. Now the Falcons need to beat the Buccaneers on Sunday for another 7-9 finish.

Quinn recognizes he is fortunate to work for one of the NFL's most patient owners.

“I do know there's been some coaches that have had some stuff together but had to go and prove some lessons elsewhere, whatever, their second or third experience,” Quinn said. “For me to have the chance to do that here with him, that means a hell of lot to me. I want to win a championship here for him and with him because of his belief. That won't ever stop."

The Falcons announced other changes on Friday. President and CEO Rich McKay will assume a more prominent role in football operations. Raheem Morris was named defensive coordinator for 2020 after his move from wide receivers to secondary coach helped spark the defense's resurgence.