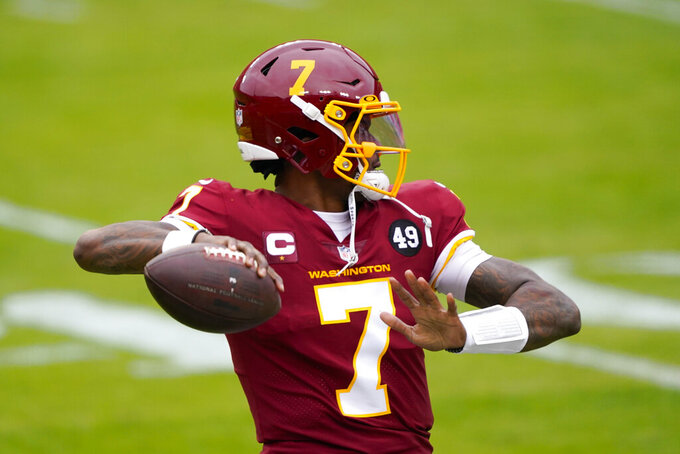 Washington Football Team quarterback Dwayne Haskins (7) as he prepares to throw the ball against the Seattle Seahawks during the first half of an NFL football game, Sunday, Dec. 20, 2020, in Landover, Md. (AP Photo/Mark Tenally) 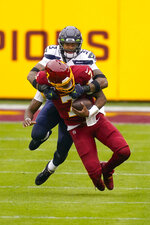 LANDOVER, Md. (AP) — Dwayne Haskins threw two interceptions, and Washington fell into a deep hole against Seattle before something changed.

It just took too long for Haskins turn that anger into a victory. The 2019 first-round pick had a maddeningly inconsistent performance in his first start since Week 4, making major mistakes before leading a comeback effort that fell short in a 20-15 loss Sunday to the Seattle Seahawks.

Filling in for injured starter Alex Smith, Haskins finished 38 of 55 for 295 yards, a touchdown pass and the two picks. He was sacked twice on the final drive, snapping Washington's win streak at four.

“He started slow and was feeling around things,” coach Ron Rivera said. “The biggest thing was he settled in. We had moved the ball in the first half and unfortunately, we turned it over.”

Haskins only got this opportunity because Smith was out with a right calf injury. Rivera benched Haskins and demoted him to third on the depth chart after a 1-3 start to the season to turn to Kyle Allen, who then gave way to Smith when he was hurt.

Rivera felt the offense was in better hands with an experienced quarterback, while insisting he hadn't given up on Haskins. Some of the Ohio State product's inexperience was on display against Seattle, notably on a forced throw to Isaiah Smith that was tipped and intercepted by Shaquill Griffin.

“There were some plays I’d want back, for sure,” Haskins said.

Rivera said Smith would start if healthy next week against Rivera's old team, the Carolina Panthers. But there were glimmers of hope in Haskins shrugging off the interceptions, rushing for 28 yards and mounting a comeback attempt.

Seattle defenders could see that, even those who took advantage of his errors.

Washington promoted and activated two practice squad quarterbacks in light of Smith's absence, but neither Steven Montez nor Taylor Heinicke even got close to warming up on the sideline when Haskins was struggling. That turned out to be the right move: Haskins was 13 of 19 in the fourth quarter.

“We felt short,” Haskins said. “I thought we had them in the end.”

Instead of padding their lead atop the weak, unpredictable NFC East, Washington players moved into scoreboard-watching mode at 6-8. Dallas inched closer by beating San Francisco without Ezekiel Elliott to improve to 5-9, with the New York Giants right in the race, too.

“Everyone knows what needs to happen for us to get in,” said tight end Logan Thomas, Washington's leading receiver with 12 catches for 96 yards. “It doesn’t matter unless we take care of business against the Panthers.”