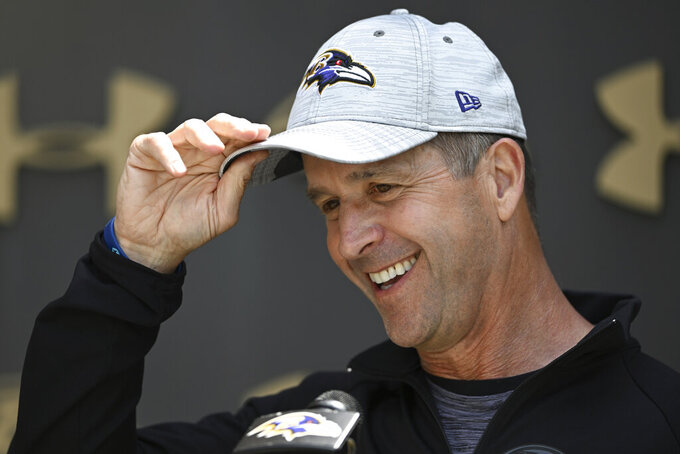 OWINGS MILLS, Md. (AP) — Practice this week for the Baltimore Ravens looked a bit like it did at the end of last season.

Wednesday was the first day reporters were invited to observe one of the Ravens' organized team activities. Jackson wasn't there, and although OTAs are voluntary, when the franchise quarterback isn't around, it's at the very least noteworthy.

“It's not for me to speak for somebody else on that," coach John Harbaugh said. “It's up to him to speak for himself.”

In other words, there would be no public reaction from the head coach about Jackson's absence. On Tuesday, Jackson retweeted a Ravens tweet about the first day of OTAs, saying he couldn't wait to get back.

“I think as long as guys are working, no matter where they are, I think that's the biggest key,” cornerback Marlon Humphrey said. “I spoke with Lamar early in the offseason. He said he'll be coming in, so we'll look real excited to get him out here.”

The Ravens will also hold OTAs open to the media each of the next two Wednesdays, followed by mandatory minicamp June 14-16.

After last season, Harbaugh said the team couldn't afford to write off all those injuries as a fluke. Instead, the Ravens would look at ways to prevent that from happening again.

“I think they're making an effort to do certain things — make extra warmups, stretch more, just the schedule throughout the day," tight end Mark Andrews said. "Just being mindful of how we're feeling, where we're at in the year. There's a long season ahead, there's a long year ahead.”

The Ravens were without cornerback Marcus Peters and running backs J.K. Dobbins and Gus Edwards all of last season because of knee injuries. They weren't at practice Wednesday. Humphrey, however, was back, much to Harbaugh's delight.

“It's a big deal. I'd sit up here and try to play it cool on that, but it wouldn't be real,” Harbaugh said. “It's exciting to see Marlon out there. He's practicing, he's been going full speed for quite a while now. Marcus is in great shape, he's coming along really well. We've seen him, he's been back in the building rehabbing, so excited to see him in training camp.”

The spotlight will remain on Jackson, however, whether he's at practice or not. He's entering this coming season on his fifth-year option and hasn't signed an extension. Baltimore also traded its top receiver from last year, Marquise Brown, at Brown's request.

Jackson showed last season he still has MVP potential. He was on pace to surpass his career high for yards passing if not for his injury. But he also set a career high for interceptions.

Whenever Jackson does arrive to practice with the Ravens, his presence will clearly be welcome.

“I've talked with him. I know how hard he's working. He's extremely motivated, extremely hungry, so there's no worries over there," Andrews said. "I know what he's doing. We're all working to do our job here, and getting ready for him.”