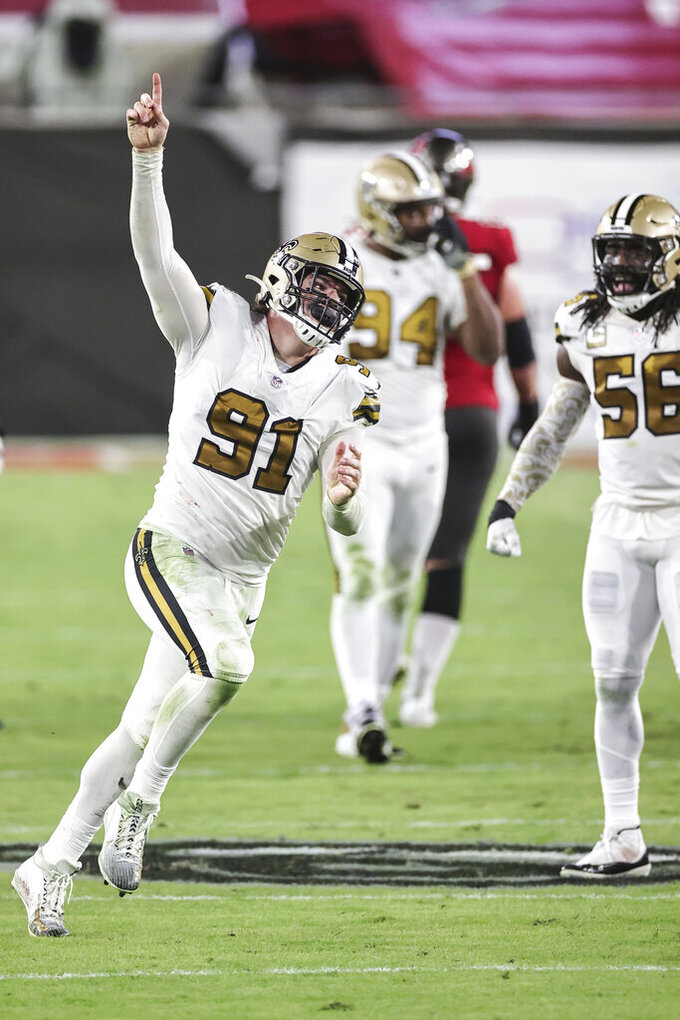 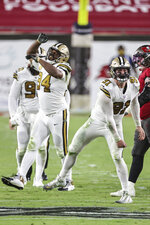 “The work’s not done. We’re only eight games in. So I’m hungry,” Hendrickson said when asked about his career-best 7½ sacks this season, which ranks third in the NFL. “I don’t think anybody in a race wants to take third. But, that’s why I’m fortunate enough to have an opportunity to keep getting them these next eight games.”

Halfway through the season, the Saints have had nine players combine for 22 sacks — with eight of those sacks coming in just the past two games. That leaves them slightly off the pace of last season, when they had 50 sacks. But New Orleans also had to play its first four games without starting end Marcus Davenport because of his elbow and toe injuries.

Former Cal star Cameron Jordan, who has led the Saints in sacks for the past five seasons, has been limited to 2½ sacks by opposing offensive fronts that are scheming to stop him with double teams. But increasingly, the Saints are finding ways to make opponents pay for that.

Defensive tackle David Onyemata has three sacks, while linebacker Demario Davis and safety Malcolm Jenkins have taken down QBs on blitzes a couple of times apiece.

The 49ers’ beat-up offensive line has allowed 23 sacks. Mullens, who has appeared in five games and started three because of injuries to Jimmy Garoppolo, has been taken down nine times.

It hasn’t helped that a few top 49ers skill players have been injured lately, with running back Raheem Mostert (ankle) missing the past three games and star tight end George Kittle (foot) going out for possibly the rest of the season two games ago.

“Each week gets more and more important to protect and to continue to get better, whether it’s technique, communication, scheme, whatever it is,” Niners offensive tackle Mike McGlinchey said. “But there’s not more pressure to protect Nick. He’ll be fine and he does his job as good as anybody.”

The Saints' defensive front also has demonstrated that when it doesn't get sacks, it can still make QBs uncomfortable and less effective as passers.

In a 38-3 demolition of the Buccaneers last Sunday night, Brady, who was sacked three times in the game, often looked uncomfortable throwing the ball. He was intercepted three times, including once by Onyemata on a ball batted at the line of scrimmage by both Davenport and Jordan.

Brady completed less than 60% of his passes, releasing numerous throws as he was about to get knocked down.

“We were fortunate enough to be a part of the keys to victory, getting after the quarterback and affecting Tom, getting them off the spot,” Hendrickson said. “So, when you’re doing something like that, and being successful at it, and the team’s winning, it feels good when we’re rolling and it’s a huge help in the secondary, too.”

Jenkins said another factor contributing to the Saints' pass rush is improved coverage of opposing receivers early in their routes.

“Pass rush and coverage always go hand in hand; you show me a great D-line that can get a rush on the quarterback, I’m going to show you a secondary that doesn’t give a quarterback quick options,” Jenkins said. “When we play well as a secondary, our D-line can win.”

Saints coach Sean Payton credits defensive line coach Ryan Nielsen for the unit’s ability to work in sync even as substitutions are made to keep players fresh. Last weekend, the line thrived despite the absence of starting tackle Sheldon Rankins, who is out several weeks with a knee sprain.

The Saints’ defensive front also has often been able to stifle opponents’ running games, ranking second in the NFL against the rush (allowing 80.3 yards per game).

“We’ve got a good rotation going,” Payton said. “When you look at the total snap counts they’re playing, it requires a lot of energy.”

While Hendrickson is having a breakout year professionally, he had also put up eye-catching numbers in college at Florida Atlantic, most notably his school-record 14½ sacks as a junior in 2015.

“Sacking the quarterback is something special at any level of playing. But doing it in the NFL is completely different,” said Hendrickson, a third-round draft choice in 2017.

“There’s a lot more that goes into it. And I’ve been fortunate enough to learn from the guys like Cam and (former teammate) Alex Okafor on how to study film and dissect things. You didn’t have to do that at FAU, but as far as just getting after the quarterback, this is something I was born to do.”

19 minutes ago
By Dennis Waszak Jr. an hour ago
an hour ago
By Paul Newberry 2 hrs ago
By Steve Megargee 2 hrs ago