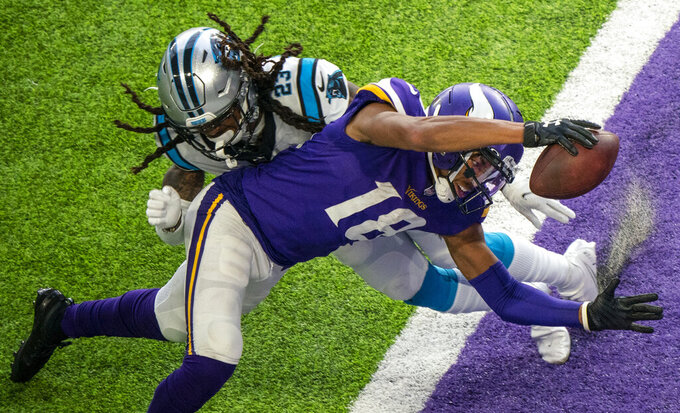 MINNEAPOLIS (AP) — The Minnesota Vikings had just given them the gift of a muffed punt, and the Carolina Panthers were on the verge of a gritty victory — against Teddy Bridgewater's original team, no less.

With a three-point lead and 1:54 remaining, Bridgewater dropped back to pass on third-and-goal from the 3 as a wide-open D.J. Moore cut across the middle of the end zone.

But Bridgewater threw behind Moore, who hurt his ankle on the awkward landing, and the incompletion led to the Panthers settling for a short field goal.

Kirk Cousins threw for the go-ahead touchdown on the other end to Chad Beebe, who had just muffed his fair catch and given the Panthers the ball at the 9-yard line. Then, after Bridgewater completed three passes for 51 yards to put Joey Slye in position for the winning kick, Slye's 54-yard try went wide left to preserve Minnesota's 28-27 win.

“That’s 100 percent in range, based on what I’ve put on tape and what I’ve been able to do,” said Slye, who made two field goals and had a 28-yard attempt blocked in the third quarter. “For me to not do what they sent me out there to do and what I feel comfortable hitting, it’s frustrating for me.”

There was plenty of frustration to go around for the Panthers (4-8), who squandered an opportunity to take a winning streak into their bye.

Bridgewater, who went 19 for 36 for 267 yards and a touchdown pass to Robby Anderson, was intercepted by former teammate Eric Kendricks at the 7-yard line earlier in the second quarter. Though he was operating again without All-Pro running back Christian McCaffrey, out for the third straight game because of a shoulder injury — his ninth absence of the season — Bridgewater shouldered some of the blame for that misfire to Moore.

The Panthers said the officials spotted the ball more quickly than they expected after a second straight run by Mike Davis. In the ensuing hustle to call a play and communicate it to the entire offense, the Panthers didn't set themselves up for success.

“Just got to be better from top to bottom, from the sideline to executing on the field. It’s one of those deals where I feel like we might have panicked a little bit trying to figure out what play call to call in that situation," Bridgewater said, adding: "Honestly, we called a great play. We just didn’t have enough time to execute the play.”

Bridgewater's arm was hurt on the incompletion when he was hit by a Vikings player. Coach Matt Rhule said the injury, which Bridgewater said was minor, contributed to his decision to kick a 21-yard field goal rather than go for the game-sealing touchdown on fourth-and-3.

“I figured take the points, make them have to score a touchdown and an extra point with them having no timeouts left. That was the thought process,” Rhule said, adding: "At least it gave us a chance to have the ball back at the end.”

Cousins, in turn, directed a seven-play, 75-yard march in 65 seconds to give Minnesota the lead. After putting plenty of pressure on Cousins and bottling up star running back Dalvin Cook over most of the game to that point, the Panthers played it safe on defense during the decisive drive and sent only three pass rushers on the majority of the snaps.

“Nothing is frustrating as allowing them to go 75 yards with no timeouts to win the game. That’s highly frustrating," said defensive tackle Zach Kerr, whose sack of Cousins early in the third quarter forced a fumble that rookie Jeremy Chinn scooped up and returned for a 17-yard touchdown.

Chinn did the same thing when he pried the ball away from Cook in a crowd on the next play from scrimmage, returning that 28 yards for a score and a 21-10 lead.

Bridgewater was the starter for the very first Vikings game at U.S. Bank Stadium, a sharp performance in an exhibition. Two days later, he dropped back during a routine drill in practice and dislocated his knee so badly he tore multiple ligaments and needed an ambulance ride to the hospital to prevent nerve damage that could have forced an amputation.

Bridgewater, who sat out last week against Detroit because of a minor knee injury, wasn't interested in reflecting on the moment after a difficult loss. For all the promise the Panthers have shown under Rhule in his first season, amid a steady stream of injuries, this was a discouraging finish that Rhule pinned on himself and his assistants.