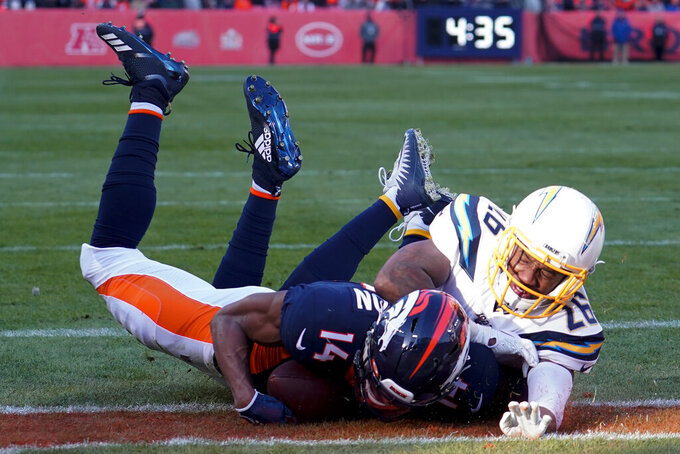 ENGLEWOOD, Colo. (AP) — Vic Fangio won't play any of those self-described silly games this week; he's already announced Drew Lock as his starting quarterback for the Broncos' game at Houston on Sunday.

Lock became the Broncos’ first QB to win his first start in his rookie season since John Elway and Gary Kubiak did so in 1983 when he capitalized on short fields and a big target in Courtland Sutton for a 23-20 win over the Chargers.

Fangio acknowledged afterward that he was fibbing Friday when he said he needed to review the film to make a decision between Lock and Brandon Allen; he knew Thursday after Lock's second solid practice that he'd get the nod.

So, why not just say so?

The Chargers weren't fooled. It's a good bet the guy getting three-fourths of the first-teams snaps is the one you’ll face.

But the Broncos may have botched the chance to create more buzz — and concession sales — Sunday. A whopping 19,094 no-shows were hitting fresh powder or the shops or any number of other activities instead of watching Lock lead the Broncos (4-8) to a sweep of the Chargers (4-8) for the first time since 2015.

Fangio was asked if the idea is to stick with Lock the rest of the season.

"There was no long-term plan other than if he did fine, he would stay in there," Fangio said. "I'm telling you now he's starting next week. You don't have to wait until Saturday."

Lock didn't light it up, but he did capitalize on short fields and a big target in rising star receiver Courtland Sutton, who caught both of Lock's touchdown throws and drew a 37-yard pass interference flag with 3 seconds left, setting up Brandon McManus' game-winning field goal as time expired.

Lock’s stats weren’t great — 18 for 28 for 134 yards — but he brought swag to the position that’s been lacking it since Peyton Manning was under center yelling “Omaha!”

"Drew having that swag, it ultimately rubs off on everyone," Sutton said. "It's really good to be able to see him go out there and play with that confidence and swag. I'm excited just to see what he does the rest of this season and then moving forward the rest of his career."

Lock won’t get too big-headed around Fangio, though.

"I'm just not ready to put him in Canton yet," Fangio said. "I think it was a great start for him, something that he can build upon because obviously we didn't light up the scoreboard or have a ton of yards and first downs. But I think in many ways it's probably a good way for him to start ... we got the win, but there's still a lot of room for improvement."

Sutton caught the first TD pass thrown by both Allen and Lock. His average yards per catch have gone up with each QB: from 16.3 yards with Flacco to 17.7 yards with Allen and 18.5 yards with Lock. Overall, he has 54 catches for 906 yards and six TDs.

No. 3 WR DaeSean Hamilton had a pair of catches for 12 yards but dropped a pass when he was uncovered on third-and-12 from the Chargers 34. Hamilton can't afford those kinds of mistakes because he's only been targeted 21 times in 487 snaps this season.

S Will Parks, playing with a cast on his broken right hand, recorded the first sack of his career.

RB Devontae Booker. He's the forgotten man in Denver's backfield with just one carry all season. His roughing penalty on the punter Sunday came on fourth-and-7 and gave L.A. new life on its first scoring drive.

DE Derek Wolfe dislocated his left elbow shortly after recording his second sack of the game and seventh of the season, breaking his career high he set his rookie season in 2012. He went for an MRI on Monday and could be done for the year as he heads into free agency.

95 — consecutive games Von Miller had played before sitting out Sunday with a sore left knee.

Get Lock ready for the road with trips to visit division leaders Houston and Kansas City.