Chiefs head into offseason with core intact, plenty of holes 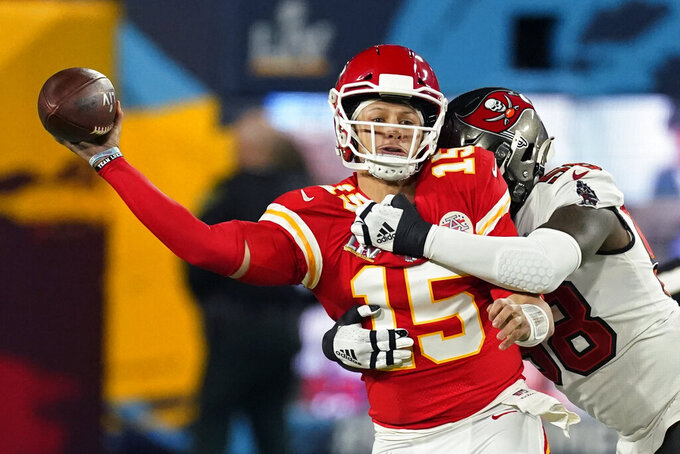 KANSAS CITY, Mo. (AP) — The Chiefs were so confident in their Super Bowl-winning roster from the 2019 season that they did everything they could to bring it back intact, signing quarterback Patrick Mahomes and defensive tackle Chris Jones to huge deals and reworking other contracts to make the numbers fit in the salary cap.

It almost worked, too. The Chiefs made it back to the big game before injuries along the offensive line, mental mistakes and a near-perfect performance by the Tampa Bay Buccaneers ended their season one win short of a repeat.

Now, the Chiefs will have to take a much different tact if they want to make their third consecutive Super Bowl.

While their core group is signed for the next several years, the Chiefs have a raft of important contributors that are due to hit free agency. That includes wide receivers Sammy Watkins and Demarcus Robinson and four of the five offensive linemen that started in the Super Bowl. As well as the defense, including eight players that were regulars or starters this past season.

“Like all teams, we'll get busy here going down the road,” Chiefs coach Andy Reid said Monday. “We'll still have a good core of players coming back. We'll have some additions. No team stays in the same in today's NFL.”

It was clear in a 31-9 romp by the Buccaneers that the status quo probably wouldn't work anyway.

The Chiefs managed to hide their many shortcomings while winning a franchise-record 14 regular-season games and then beating Cleveland and Buffalo in the playoffs. But those issues were on stark display Sunday night: a makeshift offensive line pounded by the Tampa Bay pass rush, their own pass rush never getting pressure on Tom Brady, their secondary struggling against the Bucs wide receivers and their linebackers constantly out of position or slow to make plays.

Mahomes will have wide receiver Tyreek Hill, tight end Travis Kelce and running back Clyde Edwards-Helaire at his disposal next season. But the big names are surrounded by some big holes that Kansas City will have to fill.

Watkins only had 28 catches for 421 yards and two touchdowns during another injury-filled season, and Robinson slowly lost playing time to Byron Pringle, who is a restricted free agent. That leaves Mecole Hardman, who has plenty of limitations as a wide receiver, as the only viable No. 3 pass-catcher heading into next season.

Offensive linemen Mike Remmers, Stefan Wisniewski and Andrew Wylie were supposed to be backups, but each played in the Super Bowl because of injuries. Now, all three are free agents along with center Austin Reiter.

The reason that Brady dominated the Chiefs defense in the Super Bowl was twofold: their inability to generate pass rush — he was pressured four times on 30 drops compared to 29 pressures on 56 drops for Mahomes — and shortcomings among the cornerbacks when it came to covering deep downfield.

The Chiefs are nearly $12 million over the salary cap headed into next season, and nobody knows quite what the 2021 cap will be given the COVID-19 pandemic that affected the league's bottom line. In other words, they will likely need to rework several contracts or cut some big-name players to save some money for next season.

Left tackle Eric Fisher, who tore his Achilles tendon in the AFC title game and may not even be ready for next season, would be an obvious choice; cutting him ahead of the final year of his contract would save about $12 million in cap space and cost only $3.1 million in dead money.

The Chiefs should get some help from guys that were injured or opted out of this past season. That includes left guard Laurent Duvernay-Tardif, the trained physician who opted out to help COVID-19 patients in his native Canada, and third-round pick Lucas Niang, who also opted out. Both of their losses were sorely felt in the Super Bowl.

Right tackle Mitchell Schwartz also should be back from a back injury that ended his season, while running back Damien Williams is expected back after his opt-out — though cutting him would save about $2.2 million in cap space.

The Chiefs will draft late in each round, and they also traded away their sixth-round pick, putting the pressure on Veach and his staff to unearth some overlooked gems that can plug some of their holes at relatively low costs.