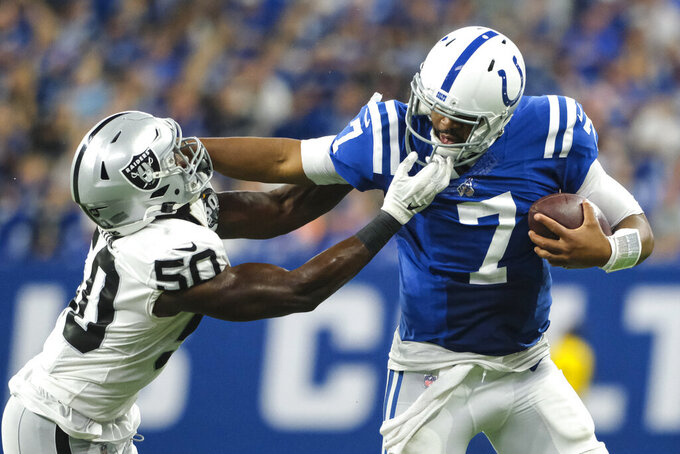 KANSAS CITY, Mo. (AP) — The primetime showdown Sunday between the Indianapolis Colts and Kansas City Chiefs was supposed to be a matchup of Super Bowl contenders with young quarterbacks poised to begin a rivalry that could stretch the next decade or more.

Then the Colts’ Andrew Luck announced his stunning retirement and all bets were off.

But the most curious of things has happened through the first four weeks of the season: Jacoby Brissett has not only filled in quite admirably for the departed Luck, he has thrived under Colts coach Frank Reich to the point that he, too, is considered a potential star going forward.

Suddenly, that matchup of Super Bowl contenders is back on. And so is that matchup between young quarterbacks, only with Brissett going head-to-head with reigning league MVP Patrick Mahomes.

“Jacoby has really been sharp, really No. 1 just from a perspective of competitiveness and poise, and I think he’s passing his first test here with flying colors,” Reich said. “Nothing is too big for him. He seems the most poised in the biggest moments. Physically, he’s showing his accuracy is very good and his ability to extend plays is very good. And mentally he’s handling our offense.”

Just so happens that those traits are what have made Mahomes special, too.

“It’s honestly just, play our game. You can’t get into the game where you’re playing offense versus offense or defense versus defense, things like that,” Brissett said. “Just go out there and play football. You put your best foot forward.”

The Colts struggled to do that the previous time they visited Arrowhead Stadium.

Indianapolis rolled into town in January for a divisional playoff matchup, and the Chiefs rolled to a 24-7 halftime lead. Mahomes wound up throwing for nearly 300 yards, the Chiefs held Luck to a tick over 200 yards passing, and Kansas City won 31-13 _ its first home playoff win in 25 years.

“Any time you get to play at Arrowhead Stadium it’s exciting,” Mahomes said, “but from the experience I got the last few years from primetime games, how the fans show up and they’re loud, it’s going to be an awesome feeling out there.”

As the Chiefs prepare for just their second home game of the season, and the first of three primetime games in a four-week stretch, here are some things to know:

Indianapolis safety Malik Hooker tore the meniscus in his knee two weeks ago and the other starter, Clayton Geathers, was diagnosed with a concussion following last week’s loss to Oakland.

So, the Colts have spent this week putting together backup plans. Khari Willis replaced Hooker in the lineup last week while George Odum and Rolan Milligan are next on the depth chart, though the Colts have toyed with using cornerback Quincy Wilson at safety.

“He’s played multiple spots for us,” defensive coordinator Matt Eberflus said. “He’s played in the dime package over certain guys and played in our pressure packages at times. We’re going to look at him there. He’s certainly an option.”

Brissett and Mahomes are tied for the league lead in touchdown pass, and some are already making comparisons. But if Brissett gets the chance Sunday, he may sneak a peek or two at reigning MVP.

“It’s kind of cool to see some of the stuff he does,” Brissett said. “Hopefully he doesn’t do it this week, but the things he can do with the ball, it’s very impressive. You just watch and you are like, ‘Yeah, I can’t do that. But it’s fun to see somebody else do that.”

Colts defensive end Justin Houston spent his first eight NFL seasons with the Chiefs, setting all kinds of records. On Sunday, he’ll be using the visiting locker room for the first time.

General manager Chris Ballard, who got to know Houston during his tenure in Kansas City, jumped at the chance to sign the 2014 league sacks champion in hopes of helping the pass rush. He has been productive, recording 11 tackles, three quarterback hits, one sack and recovering one fumble.

“We know certain things to take him out of the game because we’ve gone up against him here in practice,” Chiefs offensive guard Andrew Wylie said. “Our tackles are really cued into his strengths.”

Chiefs coach Andy Reid heaped praise on Ballard, a longtime friend, for constructing a roster in Indianapolis that could deal with Luck’s retirement so close to the start of the season.

“They’ve got good leadership with Chris, obviously, and in their front office,” Reid said. “They have a quarterback with over a 100 rating. He’s doing a heck of a job. We liked him coming out. He did well in New England. They’re all doing well over there.”

Veteran cornerback Morris Claiborne is expected on the field for the Chiefs for the first time this season after serving a four-game ban for violating the NFL’s substance-abuse policy. Claiborne is coming off a productive two-year run with the New York Jets, and he is expected to eventually take over the starting cornerback job opposite Bashaud Breeland in the Chiefs’ base defense.

“He has a lot to bring to this team,” Breeland said. “We’re all excited to get him out there.”