Falcons' Morris doesn't look at himself as an interim coach 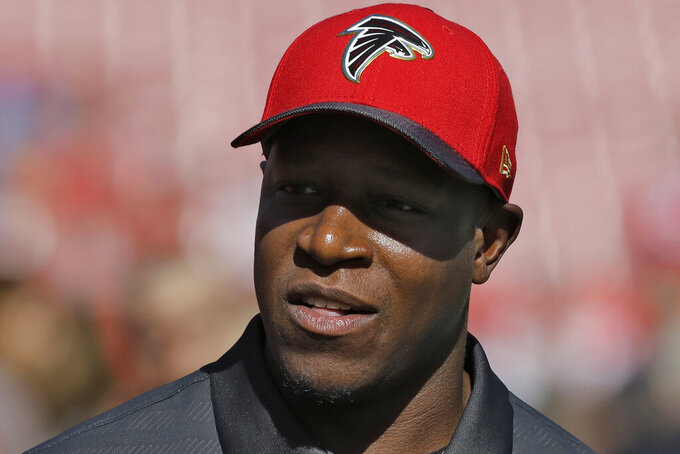 ATLANTA (AP) — Raheem Morris would prefer that everyone stay away from the “I” word.

Sure, he's officially the interim head coach of the Atlanta Falcons, a caretaker role handed to him by a team that fired Dan Quinn after losing its first five games.

But Morris refuses to look at himself in a temporary sort of way.

Morris' second chance at a top job is off to a promising start. The Falcons finally picked up their first win of the season, romping past the Minnesota Vikings 40-23.

If Morris can conjure a few more performances like that one out of his team, he might earn serious consideration at keeping the job beyond this season.

The Falcons (1-5) will go for their second straight victory when they host the Detroit Lions (2-3) on Sunday.

He got his first head coaching gig more a decade ago, surprisingly taking over the Tampa Bay Buccaneers at age 33 after Jon Gruden was fired.

Even though the Bucs posted a promising 10-6 mark in Morris' second season, just missing the playoffs, he went 3-13 and 4-12 his other two years. He was fired after Tampa Bay ended 2011 with a 10-game losing streak.

When he allows himself a reflective moment, Morris knows he’s better prepared to handle the job this time around.

He points to all the head coaches he's worked with over the years, from Gruden to Quinn to Mike Shanahan. He brings up his longstanding relationship with Pittsburgh Steelers coach Mike Tomlin, “one of my better friends in life.” He lists all the fellow assistants who went on to become head coaches, from Sean McVay to Kyle Shanahan to Matt LaFleur. He's even provided advice to coaches-in-waiting such as Eric Bieniemy, who could very well could be in the running to take over the Falcons when the season is done.

“I think the development over the last couple of years has been really beneficial to me," Morris said. “It really helped me.”

While the 44-year-old Morris is hardly a new face — he was on Quinn's staff from the beginning in 2015 — and most of the Falcons assistants remain the same, there is an attempt to change the mindset of a team that became the first in NFL history to lose back-to-back games when leading by at least 15 points in the fourth quarter.

“When we go out to practice, I want to make the game come to life," Morris said. “Everything we do has to simulate a game-like atmosphere.”

When a player messes up, he can expect to get called out.

Right on the spot.

“I want to make them uncomfortable,” he said. “I want them getting used to that. Things are going to happen in the game. You're going to get tired, things aren't going to go your way, the other team is going to score a touchdown. You want to bounce back, get comfortable being uncomfortable, and find a way to force your will on the opponent.”

It worked in Morris' first game. It remains to be seen if the Falcons can maintain that sort of urgency on a consistent basis, especially when playing better teams than the one-win Vikings.

“Raheem is a guy who connects with everybody, for sure,” quarterback Matt Ryan said. “He's blunt, matter of fact, and gets to the point. That's his personality type, that's his style. You've got to buy into what the head coach is preaching."

Morris is certainly a long shot to keep the job beyond this season. The Falcons are likely looking to make a clean break from the previous regime, having also fired long-time general manager Thomas Dimitroff.

Clearly joking but with an element of truth, owner Arthur Blank set a pretty high bar for Morris to have any chance of being considered in the coaching search.

Morris' first win as the head coach — don't say interim — merely left him hungry for more. He didn't even take time to savor a game ball the players presented to him after beating the Vikings.

“You hate looking at it until you can get another one,” he said. “You grow and look for the next moment.”