Jill Biden teams up with NFL great to push vaccinations 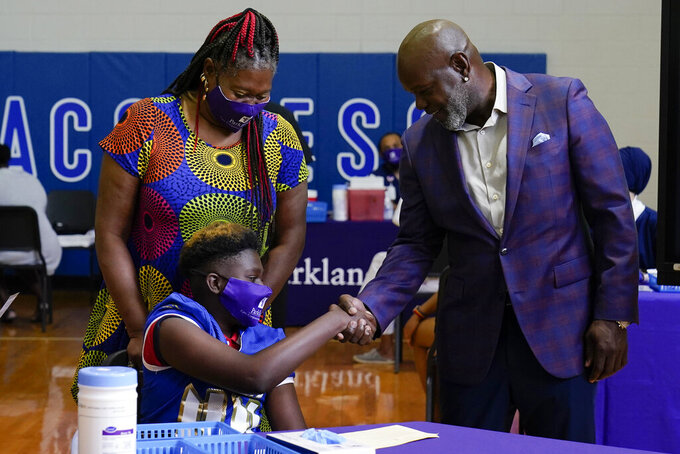 HOUSTON (AP) — Jill Biden played offense Tuesday in the fight against COVID-19, teaming up with an NFL Hall of Fame running back and America's second gentleman to encourage Texans to get vaccinated against the disease.

The first lady and Doug Emhoff, husband of Vice President Kamala Harris, met in Houston at a vaccination event sponsored by the Astros as part of a monthlong effort by Major League Baseball, featuring incentives that included tickets to future games and a replica World Series ring.

“It's safe. It's effective. It's free,” said the first lady, who has been touring the country in a push to help boost the nation's vaccination rate. Standing with Emhoff, she said, “We want to encourage everybody here in Texas to go get the vaccine.”

Emhoff, who has also been visiting vaccination sites nationwide, said the vaccines work.

“Save yourself. Save others. It's the right thing to do,” he said at the event at Houston's Union Station. The pair later took seats at Minute Maid Park, the home ballpark for the Astros, to take in several innings of the team's matchup against the Baltimore Orioles.

Earlier Tuesday, the first lady was in Dallas encouraging Texans to get vaccinated during an appearance with former Dallas Cowboys running back Emmitt Smith.

“Today, we are finally getting back the things that we lost. But as far as we've come, we're not done yet,” the first lady said in brief remarks after she and Smith toured a pop-up vaccination clinic at Emmett J. Conrad High School in Dallas.

Smith used a sports metaphor to make the same point.

“We're in the fourth quarter, and the game is far from over,” he said after the tour as they addressed a group of people who had just been vaccinated.

The first lady flew to Texas as part of President Joe Biden’s campaign to vaccinate as many Americans as possible against COVID-19 in the face of growing concern about the spread of a new and more contagious strain known as the delta variant.

Biden had set a goal of vaccinating 70% of adult Americans by Sunday's July Fourth holiday, when he plans a White House celebration of the nation's independence from the virus.

But while the administration has acknowledged it will fail to meet Biden's goal, the White House has said the president, first lady, vice president and her husband will continue to barnstorm the country encouraging holdouts to roll up their sleeves.

Nationwide, 66% of adults have received at least one dose of a COVID-19 vaccine, according to the Centers for Disease Control and Prevention.

In Texas, just under 50% of people ages 12 and older — the demographic being served at the Dallas high school's clinic — have been fully protected against the disease caused by the coronavirus, according to state COVID-19 data on the CDC's website.

The first lady said she came to Houston because of its low vaccination rate.

“The president, the vice president, Doug and I, we care about the American people, about their health,” she said after approaching a phalanx of journalists to encourage vaccinations. “So that’s why I’m here. That’s why Doug’s here.”

Added Emhoff: “We're going to places where the numbers need to get better.” The pair are to tour a vaccination site at a Phoenix middle school on Wednesday.

As an incentive, anyone getting vaccinated at the high school will receive tickets to the Six Flags Over Texas theme park. They will also be eligible to win prizes, such as airline or concert tickets and gift cards, through a raffle sponsored by Dallas Mayor Eric Johnson's office.

Biden and Emhoff's stop in Houston was their first joint appearance of the administration. They had campaigned together several times during the 2020 general election.

The Astros hosted the clinic as part of Major League Baseball's “Vaccinate at the Plate” program, held during June, which offers incentives to fans who get protected against COVID-19.