The Latest: Mistrial on last counts in ex-NFL player trial 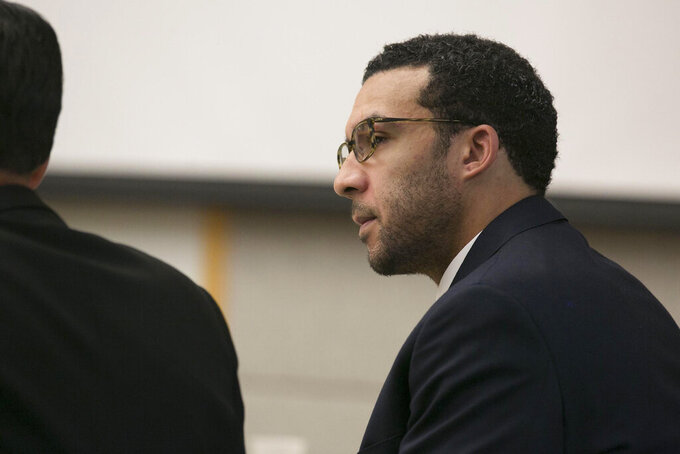 A California judge has declared a mistrial on remaining counts against former NFL player Kellen Winslow Jr. after the jury that earlier convicted him of raping a homeless woman remained deadlocked on other charges.

The San Diego County Superior Court judge on Tuesday also denied a defense motion to dismiss the undecided allegations involving the alleged rapes of a hitchhiker and an unconscious teen.

On Monday, the jurors convicted Winslow of raping a 58-year-old woman and told the court they were deadlocked on the other charges.

The judge ordered them to return to deliberations, but the panel quickly informed the court Tuesday it was hopelessly deadlocked.

A California jury that convicted former NFL player Kellen Winslow Jr. of raping a 58-year-old homeless woman has been ordered to keep deliberating after jurors told a judge they were deadlocked over eight other charges, including the rapes of two more women.

The judge ordered jurors to return Tuesday to San Diego Superior Court in Vista, a day after they handed down the verdict on one count of rape. Jurors also found Winslow guilty of indecent exposure and lewd conduct involving two other women.

The two other counts of rape involve a 54-year-old hitchhiker and an unconscious teenage girl in 2003.

Defense attorneys attacked the accusers' credibility, noting inconsistencies in their stories. Prosecutors say the crux of their testimonies remained unchanged.

All five women testified during the nine-day trial.