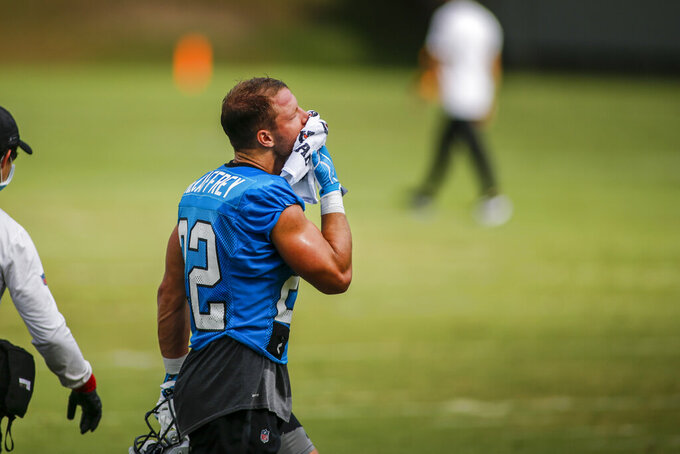 Vollert earned national attention when he was shown on “Hard Knocks: Los Angeles” telling Chargers coach Anthony Lynn to his face “you’ve got to be (expletive) kidding me” after learning he was being released by Los Angeles on Aug. 1.

The undrafted 25-year-old tight end suffered a torn ACL in the 2019 preseason and was placed on injured reserve by the Chargers and was hoping to battle back and make the roster this season.

“I did see ‘Hard Knocks’ and those are brutal, gruesome meetings,” Panthers coach Matt Rhule said. “It's like when you get let go from a job, it is emotional so I understood where he is coming from. I know he has battled back from an ACL injury. But just like all of us, when one door closes another one opens. So now he has an opportunity here and I'm looking forward to an opportunity to work with him and get to know him."

Rhule said Vollert is a “big tight end who can get down the field and be a receiving threat.”

The decision to add Lewis and Michel to the roster came after free agent wide receiver Keith Kirkwood injured his shoulder.

Lewis spent time with Panthers quarterback Teddy Bridgewater and offensive coordinator Joe Brady with the Saints in 2018. He was the intended receiver on the controversial non-call pass interference against the Los Angeles Rams in the NFC championship game.

Lewis spent his first three seasons with New Orleans before joining Detroit in the 2019 offseason. After the Lions cut him last August, Lewis played for the XFL's Dallas Renegades. He re-signed with the Saints in mid-March, but was cut earlier this month. He has 20 receptions for 252 yards and two touchdowns in 34 career games.

Michael spent most of his pro career with the Canadian Football League’s Calgary Stampeders, playing in 24 games with 132 receptions with 1,215 yards receiving and eight touchdowns. Michel’s brother, Sony, is a running back for the Patriots.

Sunday's practice was Carolina's first in front of reporters since Rhule's arrival because of the coronavirus. It was extremely fast-paced compared to Ron Rivera's practices, although it was clear Rhule would like the pace to be even faster in the future.

One noticeable change in Rhule's practices is the team's quarterbacks wear green practice jerseys, rather than the traditional red jerseys.

NOTES: Panthers starting left tackle Russell Okung left practice early as part of a plan to ease the stress on his lower back. Rhule said Okung was taken inside the building to work in the pool to help ease that pain. Okung was acquired from the Chargers earlier this offseason in a swap for five-time Pro Bowl guard Trai Turner.