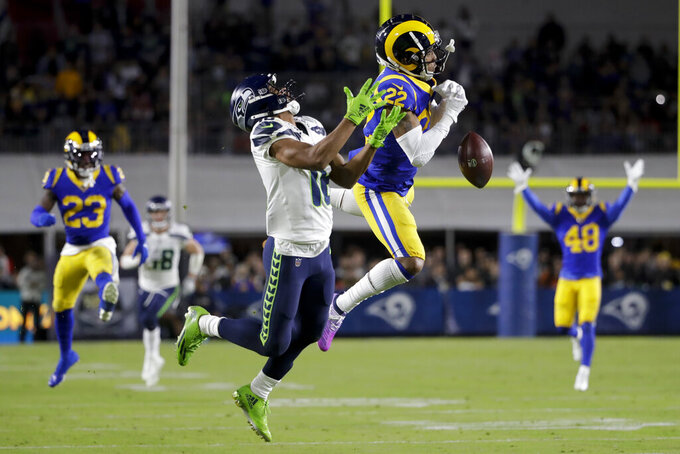 THOUSAND OAKS, Calif. (AP) — With one enormous asterisk, the Los Angeles Rams defense has been a dominant force ever since cornerback Jalen Ramsey arrived two months ago.

This surge of stellar defensive play might not be enough to salvage another playoff trip for the Rams (8-5). But the unit's performance in a 28-12 win over the powerhouse Seattle Seahawks on Sunday night suggests Los Angeles will be a problem for any offense in December and possibly beyond.

Well, anybody except Lamar Jackson and the Baltimore Ravens, who blasted the Rams 45-6 last month in “the game we won’t talk about anymore,” coach Sean McVay said Monday.

Although that debacle against the NFL’s most impressive offense can’t be erased, coordinator Wade Phillips’ unit has given up one touchdown or fewer to the other six of its seven opponents since the Rams acquired Ramsey in a trade with Jacksonville. Los Angeles has won five of those games to stay one game behind Minnesota (9-4) for the second NFC wild-card playoff spot.

Ramsey doesn’t have an interception, but his presence as a shutdown cornerback has impacted every area of the field. That relationship bears fruit up front, where the pass rushers turned loose by LA’s ability to play man-to-man coverage have responded with constant quarterback pressure and plenty of sacks.

“It’s just momentum, you know,” Aaron Donald said. “You see the offense score points, that gets us amped up and pumped up to go out there and get those guys the ball back, and that’s what we’ve been doing.”

That defensive excellence has opened up opportunities for the offense, which shows even more signs of emerging from its mistake-plagued midseason. LA racked up 455 yards against Seattle, with Jared Goff and Todd Gurley making big plays when given ample time and space to do so.

"The last couple of weeks have really represented playing team football and feeding off one another," McVay said. “When you're able to operate with a lead, now you force them, based on the nature of the game, to be a little bit more one-dimensional. I think we've seen that show up in the last couple of weeks against two teams that have been playing really well. For us, it was a lot of good things."

The Rams’ pass rush has been outstanding in the two weeks since Jackson destroyed it. Los Angeles sacked Arizona’s Kyler Murray six times and dropped Wilson five times. Dante Fowler has already set a career high with nine sacks heading into possible free agency, while Donald has 11 and Clay Matthews has eight. Rising linebacker Samson Ebukam contributed on two sacks of Wilson, giving him 3 ½. Chasing Dak Prescott is up next.

Only minor mistakes stood out from this strong performance, including Seattle’s block of a field goal attempt by Greg Zuerlein. Goff threw interceptions on consecutive drives in the third quarter, one due to a miscommunication with Robert Woods and another overthrown third-down pick that actually left the Seahawks with terrible field position.

Tyler Higbee has emphatically stepped up in the injury absence of fellow tight end Gerald Everett. Higbee surpassed his career high for yards receiving for the second consecutive week, catching seven passes for a team-leading 116 yards. The Rams raised eyebrows when they gave a generous $31 million contract extension to Higbee three months ago, but he is showing the reasons for their trust. “I think I probably should have gotten him more opportunities before,” McVay said.

Brandin Cooks didn’t have a catch against the Seahawks. The $81 million receiver deserves ample credit for returning to uniform following a month off to recover from his second concussion of the season. But he has only four catches for 56 yards in the ensuing three games, and his snap count is down. He is on pace for easily the least productive season of his six-year career.

The Rams had no significant new injuries to report Monday. Right tackle Rob Havenstein “is making really good progress” back from his knee injury, McVay said. The coach didn’t sound quite as optimistic about Everett, who is likely to miss practice early in the week.

8 — The Rams’ NFL ranking in both total offense and total defense after their latest win. Putting both units in the top quarter of the league with three games to play is a fairly impressive achievement after the ups and downs of this season.

A trip to Dallas for a meeting with the slumping Cowboys (6-7). Both teams desperately need a win to preserve their tenuous standing in the NFC playoff race. The Rams are 19-5 away from the Coliseum under McVay, including 5-2 this season.