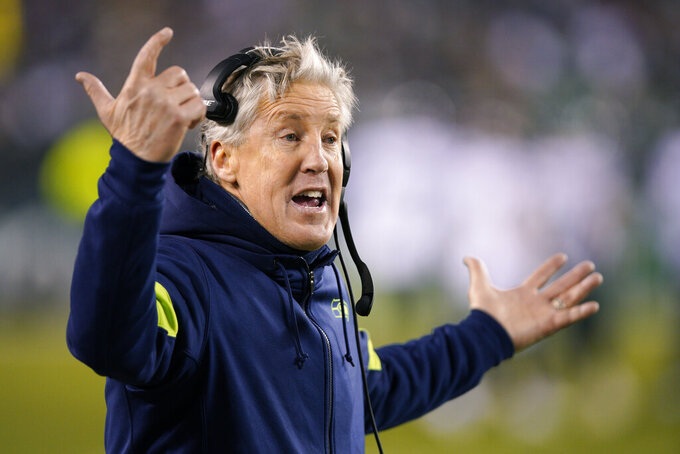 Seattle Seahawks head coach Pete Carroll reacts to a call during the first half of an NFL wild-card playoff football game against the Philadelphia Eagles, Sunday, Jan. 5, 2020, in Philadelphia. (AP Photo/Chris Szagola)

GREEN BAY, Wis. (AP) — Aaron Rodgers won his first Super Bowl nearly a decade ago. The time to capture a second is running out.

“It's on my mind every day,” Rodgers said. “That's why we play the game. That's why you put in the time in the offseason. That's why you do the little things. It's to put yourself in this position where we're two games away from being able to compete for that.

"I'm 36, I know what this is all about. This is an important opportunity for us. I feel like I got a lot of really good years left, but you never know. A lot of things happen year to year. We've had some great teams that have been an injury away or a play away from being special, so I want to make the most of this opportunity."

Rodgers and the Green Bay Packers will host the Seattle Seahawks in Sunday's NFC divisional playoff game. It will be the first postseason appearance for Rodgers in three years.

“I'm at the age now, I believe, that Brett (Favre) was when I was drafted, and obviously closer to the finish than the beginning," he said. "The most important thing is winning, and I know how difficult a couple of those years were when we weren't winning.”

Rodgers led an injury-laden Packers team to the NFC championship game in Green Bay's previous postseason appearance following the 2016 season before getting blown out 44-21 by the Falcons. But this Packers squad — including Rodgers — is as healthy as Green Bay has been in recent years.

“I feel great,” Rodgers said. “I started all 16 (games) and wasn't in the training room a whole lot. I had some issues early in the season with my knee. But, man, I felt great from about Week 8 on. ... It feels good to be where I'm at right now."

The biggest issue for the Packers is playoff experience, or a lack thereof. There are only four players left from the 2010 Super Bowl team and seven from the 2014 team that lost to the Seahawks in the NFC championship game in Seattle. Matt LaFleur is also preparing for his first playoff test as a head coach.

“I think it just goes back to doing what you always do,” the 40-year-old LaFleur said. “It's just like every other week. I think for guys that maybe haven't experienced the playoffs, there's definitely a heightened intensity around it. But as far as your process, as far as how you go about your daily business, I think it's got to be the same as it is any other week.”

CAN YOU DIGGS IT?

No one has more experience on Seattle’s roster playing against Rodgers than safety Quandre Diggs. Until the middle of this season, Diggs faced Rodgers twice a year as part of the Detroit secondary. Even though it’s a changed offense from what he played against in the past, Diggs is still being leaned on by teammates for little tips on how to try and slow down Rodgers.

“He is a really smart guy and any knowledge that he has is always good to gain,” Seahawks linebacker Bobby Wagner said.

The addition of Diggs has been a huge boost for Seattle’s defense. The Seahawks are 5-1 in the six games Diggs has played since coming over in a midseason trade from the Lions. While the defensive numbers aren’t markedly different, Seattle has played better with Diggs on the field.

LaFleur said Monday that a “little bit of a sickness” had crept into the building. But he said on Wednesday that “most of the guys are pretty healthy right now.”

Packers wide receiver Davante Adams had a simple prescription for the problem.

DK Metcalf had quite the debut to the NFL playoffs. Metcalf set an NFL rookie playoff record with 160 yards receiving last week against the Eagles. Metcalf had a season-high seven catches and pulled in a 53-yard touchdown in the second half that gave Seattle an 11-point lead. He also had a 36-yard catch on Seattle’s final possession to seal the victory.

“(Metcalf is) just a big, physical, fast, young receiver who I think is going to be a really, really good one,” LaFleur said of the 6-foot-4, 229-pound second-round pick from Ole Miss.

Metcalf had a strong second half of his rookie season, but the stage of the postseason put him in the spotlight after his performance against the Eagles. He’s caught at least six passes in six of the past nine games. He’s received praise all season from coach Pete Carroll and quarterback Russell Wilson for his progression.

“Just seeing that they trust in me, two of the highest people on the team trust in me to get things done,” Metcalf said. “I just got to take that and continue working and show them why they trust me so much.”

The Seahawks are 8-1 on the road this season, including a 17-9 win in Philadelphia in the wild-card round, but have lost eight straight at Lambeau Field and are 1-9 all time in the Packers' stadium. Wilson is 0-3 as a starter at Lambeau with a passer rating of 60.42. Wilson has completed just 55 of 96 his passes (57.3%) for 604 yards with six interceptions and just three touchdowns.

“I hope there’s some carryover,” Packers outside linebacker Kyler Fackrell said of Wilson. “We’ve had a lot of success against him here and hopefully we can do it again. Hopefully the weather will be to our advantage and I think we have a good game plan for him.”

The forecast calls for a kickoff temperature in the low 20s, but a potential winter storm is shaping up to arrive in the region Saturday night, bringing gusty winds and up to 10 inches of snow. Packers officials released a notice on Thursday seeking as many as 700 people to help shovel to clear out the expected snowfall at Lambeau.