Surging Vikings settle in at home for latest Cowboys visit 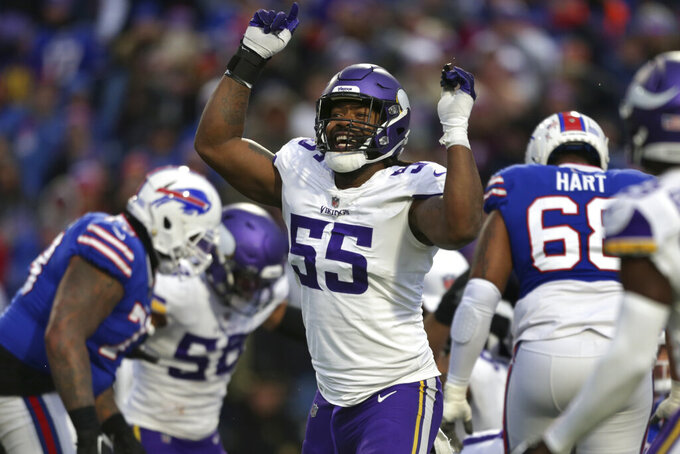 Minnesota Vikings linebacker Za'Darius Smith (55) celebrates as his team takes the lead over the Buffalo Bills in the second half of an NFL football game, Sunday, Nov. 13, 2022, in Orchard Park, N.Y. (AP Photo/Joshua Bessex)

TURNOVER DIFFERENTIAL: Cowboys plus-6; Vikings plus-8.

COWBOYS PLAYER TO WATCH: LB Micah Parsons has been forced into more snaps off the line of scrimmage because of fellow LB Anthony Barr’s hamstring injury, which has limited pass-rushing opportunities for one of the league leaders in sacks. That also hasn’t helped fortify a run defense down to fourth worst in the NFL after allowing consecutive games of at least 200 yards on the ground for just the third time in the past 36 years. Parsons seems determined to be part of the solution to fix the run defense with Dallas set to face the first of three consecutive elite ball carriers in Dalvin Cook, followed by Saquon Barkley (Giants) and Jonathan Taylor (Colts).

VIKINGS PLAYER TO WATCH: WR Justin Jefferson, who had a career-high 193 receiving yards against the Bills, needs 88 more to pass Randy Moss (4,163) for the most career receiving yards in NFL history over a player's first three seasons. The Cowboys held Jefferson to two catches for 21 yards last year. Jefferson is on pace for 2,002 receiving yards, which would break the single-season record set by Calvin Johnson (1,964) for the Lions in 16 games in 2012.

KEY MATCHUP: Cowboys RBs vs. Vikings defense. With Ezekiel Elliott sidelined the past two games, Tony Pollard has had consecutive 100-yard games for the first time in his career. The fourth-year player has 100-plus scrimmage yards in three consecutive games for the Cowboys. He had a 42-yard TD run at Minnesota in 2020. The Vikings have limited Elliott to a 3.7-yard average per carry in four meetings. The Vikings allowed a season-high 6.5 yards per rush in Buffalo last week.

KEY INJURIES: Barr (hamstring) could be sidelined for his reunion with the Vikings. The 30-year-old spent his first eight seasons in Minnesota before becoming a free agent and signing with Dallas during training camp. He was hurt chasing speedy Chicago QB Justin Fields, and the bye week before the trip to Green Bay wasn’t enough time to recover. ... Elliott (knee) has missed consecutive games because of injury for the first time in his career. The two-time rushing champ was hurt Oct. 23 against Detroit. Elliott was listed as questionable against the Packers before being inactive and took part in practice Wednesday on a limited basis, so a return against the Vikings appears likely. ... Cowboys DE DeMarcus Lawrence (foot) didn’t practice Wednesday. ... Cowboys CB Anthony Brown began the week in the concussion protocol after leaving the Green Bay game. ... Vikings LT Christian Darrisaw and CB Akayleb Evans also started the week in the concussion protocol after being forced out of their game at Buffalo. Evans started in place of Cameron Dantzler (ankle), who's on injured reserve. ... Vikings DT Dalvin Tomlinson (calf) has missed the past two games.

SERIES NOTES: This is the first time these franchises with a long playoff history against each other have played four consecutive years in the regular season. The road team has won all three in this stretch, with the Vikings winning at the Cowboys in 2019 and Dallas winning at Minnesota each of the past two years. ... The Cowboys also won on the road in 2016 and are unbeaten at U.S. Bank Stadium. ... The Cowboys have a 4-3 lead in postseason games against the Vikings.

STATS AND STUFF: The Cowboys haven’t given up at least 200 yards rushing in three or more consecutive games since their expansion season of 1960. That 0-11-1 team allowed 200-plus in four straight games. ... Since the start of 2021, Dallas is 6-1 coming off a loss. The Cowboys are finishing a four-game stretch against the NFC North and are 2-1 so far. ... CeeDee Lamb is coming off the best game of his first season as the No. 1 WR for Dallas. He had career highs in catches (11) and receiving yards (150) with two TDs against the Packers. One of the best catches of his career came as a rookie at Minnesota in 2020 when he made a twisting, over-the-head grab for a TD as he was falling in the end zone. ... The defeat at Green Bay was the first for the Cowboys in 196 games in franchise history, playoffs included, when they led by at least 14 points entering the fourth quarter. ... The Vikings, who have won seven straight games, all by one score, have three straight home games and five of their next six at U.S. Bank Stadium. ... Vikings TE T.J. Hockenson has 16 receptions over his first two games with the team. ... The Vikings have scored 42 points on their opening drives this season, the most in the league. The Eagles (35) are next. ... Vikings OLB Za'Darius Smith is tied for second in the league with 9½ sacks.

FANTASY TIP: Cowboys QB Dak Prescott, who missed five games with a broken thumb on his throwing hand, has four interceptions through four games for the first time in his seven-year career after throwing two against Green Bay. He missed the past two meetings with the Vikings, with a gruesome ankle injury in 2020 and a strained calf in 2021. In 2019, Prescott passed for 397 yards and three TDs against the Vikings.