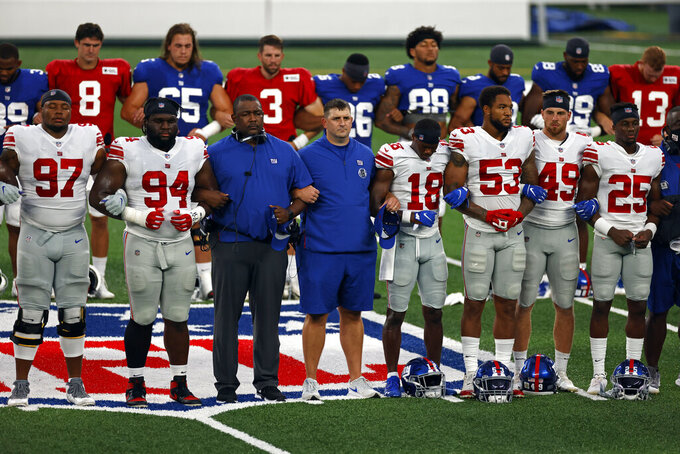 The roughly two-hour scrimmage started with the team linking arms in the middle of the field while a videotape made earlier in the day was shown on the scoreboard at MetLife Stadium with players and owner John Mara calling for equality, unity and social justice. Fans were not allowed to attend the scrimmage.

“It's been a tough week,” quarterback Daniel Jones said. “There was certainly a lot of emotion and lot on everyone's mind. We have a unique opportunity as athletes to help lead change and lead this movement and that's something that as a team we are taking very seriously and we hope to make a difference.”

Carter, who had 4 1/2 sacks last season, beat first-round draft pick Andrew Thomas twice and right new right tackle Cameron Fleming on the other. There was some question whether he should have received credit for a sack against Jones on the opening play, but it was second-and-10.

“Tonight was no surprise for us," rookie coach Joe Judge said about Carter. “He's a guy we expect a lot out of and we'll put a lot of responsibility (on him).”

Carter did not want to talk the scrimmage. He said the past couple of months have been tough on him and the Black community. He said his main focus and that of the team is helping the country get better.

“I just feel like this country is divided," he said. “We have to use our platform and voices as Black men and as athletes, any who has a voice, not just Black, not just white, everybody, we have to come together. Until we do that I can't honestly think about football.”

Backup running back Wayne Gallman scored on a 43-yard run in the first quarter and caught a 5-yard touchdown pass from Cooper Rush in the fourth quarter.

New kicker Graham Gano made three field goals, including one on the final play of the scrimmage. The Giants were 4-12 last season in missing the playoffs for the third straight year.

Linebacker Blake Martinez, who signed a three-year $30 million free agent contract, did not participate in the scrimmage. He did not practice on Thursday for an injury-related reason and Judge said he was not worried about it.

NOTES: Fourth-round draft pick Darney Holmes sustained an undisclosed lower-body injury but did not appear hurt badly. Besides touchdowns and field goals, the scrimmage awarded points for a three-and-out series (3-) and a point for a forced punt. ... For the first time at an event attended by the media, the team wore their names on the back of their jerseys.

re AP NFL: https://apnews.com/NFL and https://twitter.com/AP_NFL