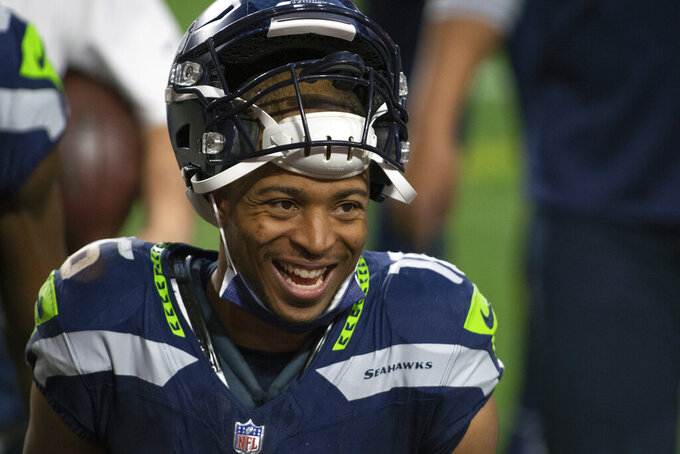 FILE - Seattle Seahawks wide receiver Tyler Lockett smiles after an NFL football game against the San Francisco 49ers in Glendale, Ariz., in this Sunday, Jan. 3, 2021, file photo. The Seattle Seahawks and veteran wide receiver Tyler Lockett have agreed to a four-year contract extension that includes $37 million guaranteed, according to a person with knowledge of the deal. The person spoke to The Associated Press on Wednesday, March 31, 2021, on the condition of anonymity because the extension had not been announced by the team. (AP Photo/Jennifer Stewart, File)

SEATTLE (AP) — Tyler Lockett is sticking around with the Seattle Seahawks, and likely as Russell Wilson's favorite target, for the foreseeable future.

The Seahawks and Lockett have agreed to a four-year contract extension that includes $37 million guaranteed, according to a person with knowledge of the deal.

The person spoke to The Associated Press on Wednesday on the condition of anonymity because the extension had not been announced by the team. ESPN first reported the deal, which could be worth more than $69 million over the life of the contract.

The deal locks up Wilson’s favorite target from each of the past two seasons and will likely help Seattle in its attempts to ease a salary cap crunch for the 2021 season. Lockett’s current contract was set to expire after this season and carried a salary cap charge of just under $15 million.

Lockett, 28, is coming off a career-best season with 100 receptions for 1,054 yards and 10 touchdowns. He teamed with DK Metcalf to become just the second pair of Seattle receivers to each have 1,000 yards in the same season. The Seahawks had an explosive passing game early in the season that fizzled badly over the second half of the year.

Lockett twice had games last season with double-digit receptions, including a career-high 15 catches for 200 yards and three touchdowns against Arizona.

Lockett was a third-round pick of the Seahawks in 2015 out of Kansas State and was a first-team All-Pro as a kick returner his rookie season. He quickly grew into one of the most reliable receivers in the league while overcoming serious leg injuries along the way.

Lockett suffered a gruesome lower leg fracture late in the 2016 season and never seemed 100% during the 2017 season.

But in 2018, his climb with Seattle began. He had 57 receptions and 10 touchdowns that season. A year later, he had 82 catches for 1,057 yards despite suffering a severe leg contusion that required a brief hospitalization.

Lockett became a bit more of a possession receiver last season with the emergence of Metcalf as a deep threat and had a career-low 10.5 yards per catch. Eight of Lockett's 10 touchdowns were of 12 yards or less.

Even with Lockett and Metcalf locked up, the Seahawks will still need to find a third receiving option after the departure of David Moore in free agency.