Chiefs eye Day 2 of draft to continue upgrading their roster 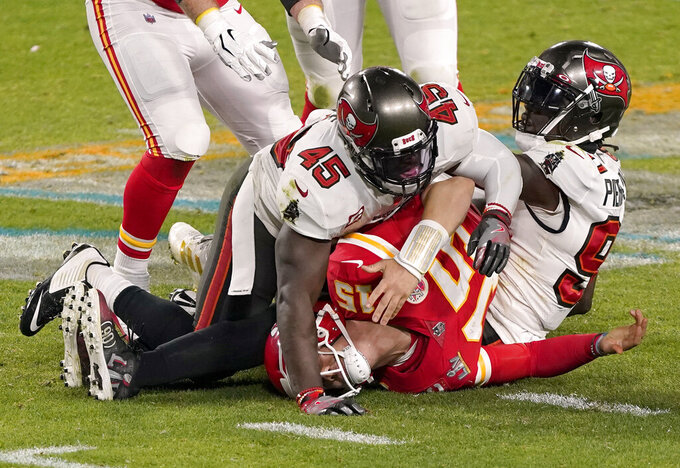 FILE - Kansas City Chiefs quarterback Patrick Mahomes (15) is sacked by Tampa Bay Buccaneers inside linebacker Devin White (45) and outside linebacker Jason Pierre-Paul (90) during the second half of NFL Super Bowl 55 football game against the Kansas City Chiefs in Tampa, Fla., in this Sunday, Feb. 7, 2021, file photo The Kansas City Chiefs already have spent the offseason rebuilding an offensive line ravaged by injuries and then dominated by Tampa Bay in the Super Bowl. But there is still work to be done, and the next opportunity to provide some help up front for quarterback Patrick Mahomes is the NFL draft. (AP Photo/Jason Behnken, File)

KANSAS CITY, Kan. (AP) — The Kansas City Chiefs spent the first round of the NFL draft the same way as fans all across the country: watching.

General manager Brett Veach made Thursday night a stress-free start to the draft when he traded the No. 31 overall pick to the Ravens earlier this week in a package that landed them two-time Pro Bowl offensive tackle Orlando Brown.

The trade filled the most glaring hole for the two-time and reigning AFC champions, one that became painfully obvious in their Super Bowl loss to Tampa Bay. But it also left the Chiefs without a first-round selection. Their initial pick is due at No. 58 overall — the 26th selection of the second round — when the draft resumes Friday night.

The Chiefs are scheduled to make their second pick five selections later before concluding their draft Saturday.

“I think the value of this draft is really that first part of two into the mid stage of three,” Veach said. “When we made that move for Orlando, that was the move we wanted, and we were happy and content with our two’s tomorrow.”

Despite the dearth of draft picks through the first three rounds, the Chiefs believe the trade with Baltimore filled their most pressing need. Their offensive line, decimated by opt outs and injuries by the time the Super Bowl rolled around, was beaten soundly by the Buccaneers in what became a humiliating 31-9 loss.

Veach and Chiefs coach Andy Reid have spent the offseason rebuilding their entire offensive line. And at this point, nobody that started the Super Bowl is expected to be in the lineup when they kick off the new season in September.

Brown is slotted into the left tackle spot. Free-agent acquisition Thuney will join Laurent Duvernay-Tardif, who opted out of last season to care of COVID-19 patients in his native Canada, at the guard spots. Austin Blythe was signed to take over as center. And right tackle could come down to Kyle Long, a former All-Pro who has come out of retirement, and Lucas Niang, a third-round pick a year ago who also opted out of the season.

“A ton of talent with the number of Pro Bowlers and All-Pros that they have here with Pat (Mahomes), Travis Kelce and Joe Thuney now, guys like me and Tyreek (Hill),” Brown said this week. “I’m looking forward to getting out there and competing each and every day, competing on game days with these guys and just really going out there and giving it my all.”

The question now: Who will join that loaded roster in the remaining rounds of the draft?

The Chiefs could use another offensive lineman — they learned the painful importance of depth last season — along with a No. 2 wide receiver and pass-catching tight end. On defense, the Chiefs need to improve their pass rush with an upgrade at defensive end and middle linebacker while adding depth in the defensive backfield.

“There will be some depth in the O-line throughout the first three or four rounds and same with the secondary,” Veach said. “It's a little thinner in the defensive line, in particular defensive tackle — I feel like we’re pretty good there, so that’s good for us. Linebacker isn’t extremely deep. So again, we’ll just have to be patient and disciplined and just look for value.”