Colts, Steelers meet while heading in opposite directions 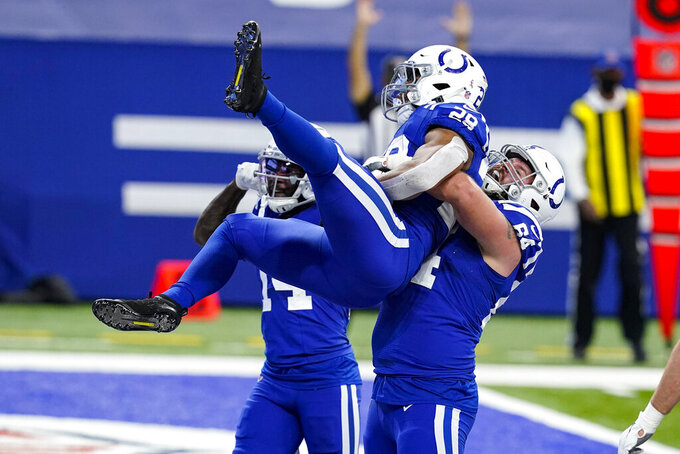 Indianapolis Colts running back Jonathan Taylor (28) celebrates touchdown with offensive guard Mark Glowinski (64) against the Houston Texans in the first half of an NFL football game in Indianapolis, Sunday, Dec. 20, 2020. (AP Photo/Darron Cummings)

PITTSBURGH (AP) — Ben Roethlisberger doesn't want to talk about the end, whenever it might come. There's too much to worry about in the present for the Pittsburgh Steelers quarterback to look too far down the road.

It's why Roethlisberger called a players-only meeting — over Zoom of course — this week. Even mired in a three-game losing streak that has sapped the swagger from his team following an 11-0 start, the playoffs loom. Roethlisberger, the only player on the roster with a Super Bowl ring, wanted to relay the sense of urgency required to succeed in January.

“I just wanted guys to understand and to reiterate how important this time of year is,” Roethlisberger said.

The message needs to resonate quickly for the Steelers. Surging Indianapolis (10-4) visits Heinz Field on Sunday. The Colts have won five of six to take control of the AFC South. And while Roethlisberger has struggled of late — throwing eight touchdowns and six picks over his last five games — fellow 2004 draftee Philip Rivers has not. The 39-year-old Rivers has a 109.3 quarterback rating over the same span, thanks in part to the kind of balance the Steelers have found elusive.

“It’s always a head game within a football game we’ve got to play against him,” Steelers defensive coordinator Keith Butler said of Rivers. "We’ve got to show him one thing and do another. It’s going to be a tough deal for us.”

Despite Pittsburgh's current slide, the Steelers (11-3) can still lock up the AFC North with a victory in either of its final two games. Indianapolis will clinch a playoff spot with a win and a loss by either Baltimore or Miami. It's exactly what Rivers signed up for when he parted ways with the Chargers during the offseason.

“These are the games and times of the NFL season that you dream about, going to Pittsburgh in December with something on the line,” Rivers said. "Obviously, a heck of a team and they’ve kept that at least since I’ve been in and even when I grew up watching them, you always thought of them as tough and physical in just the way they play. They’ve kept that as part of their DNA throughout the last 17 years I’ve been going against them.”

Maybe, but not so much lately.

Cincinnati pushed Pittsburgh around for much of a 27-17 upset last Monday that turned the Steelers' slump into nearly a full-blown crisis. R oethlisberger spent the week apologizing for his play and coach Mike Tomlin found himself having to tell wide receiver JuJu Smith-Schuster to cut out the pregame dancing on the midfield logo after two opponents chirped about it.

The sheen of one of the best stretches in franchise history is gone. The Colts have the momentum and the look of a team that could do serious damage well into January. The Steelers can't afford to peek that far down the road. And they know it.

“We’ve got a great group of guys that have bought in,” Pittsburgh defensive tackle Cam Heyward said. “It’s a three-game losing streak but that’s coming after an 11-game winning streak. Hopefully, we can get back on the horse this week.”

He also recorded 12 tackles, giving him 109 this season to make him the first player in franchise history to top 100 tackles in each of his first three seasons.

Leonard now needs six tackles to break Duane Bickett’s club record (398) for most tackles in his first three seasons. Leonard was the Defensive Rookie of the Year and earned All-Pro honors in 2018. He made his first Pro Bowl last season and has had six games with at least 10 tackles this season.

Colts rookie Jonathan Taylor learned a lot about being an NFL running back during October and November. It’s paying big dividends now. He's averaging 103.5 yards rushing over his last four games and has moved within 158 yards rushing of becoming Indy’s first rookie 1,000-yard rusher since Joseph Addai in 2006.

“The first few games you’re going in with the play, Philip calls it, you see what the defense gives you, you’re going through the assignment in your head and, of course, him having 17 years of experience he sees the defensive look and changes the entire play,” Taylor said. “Then you restart that process all over again. But now I’m getting kind of accustomed to that.”

One of the major reasons Pittsburgh's offense has taken a significant step backward in recent weeks is because of the running game's inability to take a step forward. The Steelers are the NFL's 31st-ranked rushing offense, but they might found some momentum in Cincinnati after Benny Snell ran for 84 yards.

Snell's performance came with starter James Conner sitting out due to a quadriceps injury. Though Conner is expected to be available, Snell figures to have earned a larger share of the workload.

“I thought Benny (Snell) brought a nice energy and nice physicality, got us some tough yards when we needed it, also made some guys miss and got to the outside,” Roethlisberger said. “It was nice to have that.”