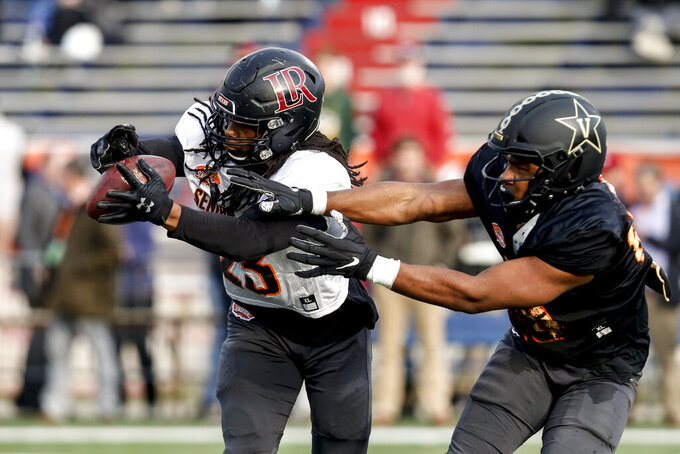 INDIANAPOLIS (AP) — Kyle Dugger played most of his college football career in the shadows of higher-profile players and programs.

Dugger isn't taking a back seat to any of them.

“It hasn’t been the easiest switch going from not having any of that (publicity) to having a lot of it," Dugger said during the league’s annual scouting combine in Indianapolis. “But they (school officials) definitely got behind me and they’re really excited."

Not so long ago, scouts didn't know much about Dugger, either. He remembers repeatedly answering three questions: What school is that, where is it located, and how did he end up in Division II?

Then again, it's easy for football players to get overlooked in Hickory, a small city full of Southern charm nestled between Interstate 40 and the Blue Ridge Parkway. There, fans flock to feature races under the Saturday night lights of 68-year-old Hickory Motor Speedway, also known as “The Birthplace of the NASCAR Stars.” Baseball fans line up to see Hickory Crawdads games. Bob Gibbons, one of college basketball's original recruiting experts, worked 25 miles away in Lenoir and has used the college gym to host high school all-star games. The nearby mountains offer plenty of outdoors options.

So Lenoir-Rhyne football hasn't always been the top choice for Saturday afternoons.

But when Dugger started turning heads, thousands showed up at 8,500-seat Moretz Stadium to see the budding star. Scouts followed, and soon Dugger was the feature attraction.

“The competitor in me definitely wanted more, at times," he said. “I’d really dive into the details of what I was doing and see if I’m doing what I’m supposed to do — or was it me getting away with things because of the level of the competition."

NFL executives knew better than to overlook another player from a school that barely registers on college football's highlight shows.

Dugger finds himself at the head of another strong class that includes offensive lineman Ben Bartch of St. Johns (Minnesota), running back James Robinson of Illinois State, tight ends Charlie Taumoepeau of Portland State and Adam Trautman of Dayton.

Three of the four, in addition to Dugger, were at the Senior Bowl. All five received combine invites, and most understand the club they're trying to join.

Bartch's story starts like so many others. He was a high school tight end with no Division I offers, opting to play at a Division III school primarily because he liked the area, loved the sport, and the school gave him a chance to extend his career.

Two years later, the coaches asked him to move to left tackle.

Then came the big twist.

Bartch spent the next three months cramming in study sessions between classwork, conditioning and coaching at a local high school. Sometimes, he relied on YouTube videos to learn the position.

To save time, Bartch devised his own breakfast smoothie creation. He describes the“magic shake” as a concoction of seven eggs, a large tub of cottage cheese, quick grits, peanut butter and a banana, topped off with a splash of Gatorade. It helped him go from 250 pounds to 305 as he turned into an NFL prospect.

“I would throw it all in and plug my nose," Bartch said. “I’d gag sometimes, but that’s what you have to do.”

Now Bartch should become the first St. John's player taken since 1974, (DT Kurt Wachtler to the Vikings in the 15th round). Bartch would be the highest draft pick in school history.

Dugger doesn't have to go back that far to find Lenoir-Rhyne's last selection: DE John Milem, chosen by San Francisco in Round 5 in 2000.

And if he becomes the highest Division II player selected since the turn of the century, he'll be on a stage where everyone knows his name, school and story.

“It’s something I will use as a stepping stone," he said. “But I kind of like being in the underdog role, kind of that dark side, villainous role, and I think it’s something I’m going to continue doing.”