Jaguars hope to avoid another slow start vs Colts in finale 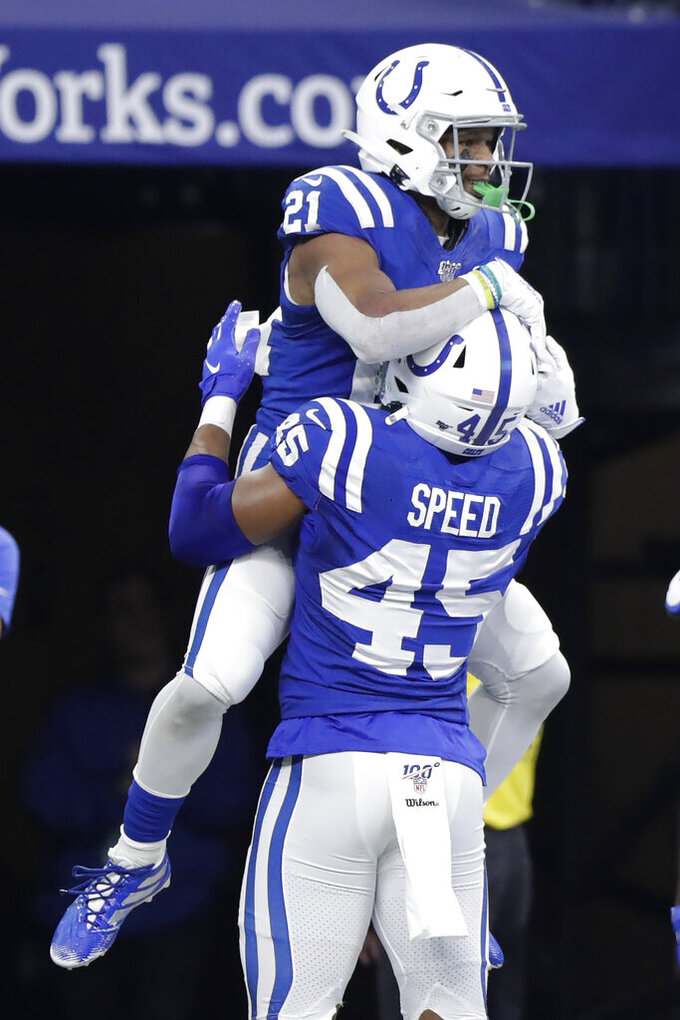 Indianapolis Colts' Nyheim Hines (21) celebrates with E.J. Speed (45) after running back a punt for a touchdown during the second half of an NFL football game against the Carolina Panthers, Sunday, Dec. 22, 2019, in Indianapolis. (AP Photo/Michael Conroy)

JACKSONVILLE, Fla. (AP) — The Jacksonville Jaguars are making a few tweaks for their season finale against Indianapolis. They're probably long overdue.

But given the way Jacksonville has struggled early in games, coach Doug Marrone felt he had to do something — anything, really — to change the team's fortune.

"I think we have some things we're planning this week to try to mix it up," quarterback Gardner Minshew said. "At this point, we're kind of throwing (stuff) on the wall, seeing what sticks and hopefully we'll get it figured out and we'll get rolling."

The Jaguars (5-10) have been outscored 108-22 in the first half over their past seven games, a series of woeful starts that have resulted in six double-digit losses and left Marrone needing to convince owner Shad Khan he deserves a chance to fix his mess without overbearing personnel chief Tom Coughlin. Coughlin was identified as the franchise's biggest problem and fired last week.

Marrone was left with two games to prove he's the right man in charge. Jacksonville responded by falling behind 14-0 at Atlanta last week — another ugly start — before Minshew even touched the ball. The Jaguars never recovered, an all-too-familiar script for Marrone.

"I understand this business," he said. "I understand what my job is. It's to win games, and when you don't do that, then you've got to be able to accept whatever the consequences are, which I think that I've always been a realist.

Marrone probably can't afford another embarrassing loss to end another dismal season in Jacksonville. He's 22-28 in three seasons and has dropped 20 of his past 27 games.

Talent is a huge issue, but Jacksonville also leads the NFL in penalties and has looked unprepared at times. Slow starts have been the most glaring issue in November and December, with the Jags falling behind in every game.

It's unclear what changes are in store against the Colts. Take the ball? More scripted plays? Some trickery?

Nothing should be too risky given Marrone's status and Jacksonville's losing ways.

Indianapolis (7-8) was leading the AFC South and had just beaten Jacksonville by 20 points in mid-November before losing four straight and falling out of playoff contention. The Colts ended their skid last week by crushing Carolina 38-6 and now can finish .500 or better for the seventh time in the past eight years.

"It's just the momentum that you take with that into the offseason training, into next season," Indy quarterback Jacoby Brissett said. "That's our primary focus. We have a great opportunity to do it."

Colts coach Frank Reich has made one thing clear since his team was eliminated from the playoffs by New Orleans on “Monday Night Football” on Dec. 16: There’s nothing meaningless about finishing this season with back-to-back wins and avoiding their second losing season in three years.

Since Minshew returned to Jacksonville's starting lineup, he's kept a much tighter grip on the football.

Minshew lost seven of 11 fumbles in his first eight starts. His lack of ball security was one reason Marrone went back to Nick Foles after Foles returned from a broken left collarbone. But since Minshew replaced Foles, he's only put the ball on the ground once, and Jacksonville recovered. He hasn't fumbled in three consecutive games.

"Just a new focus to it," Minshew said. "Just learning (that) guys get on you a lot quicker. They're longer, they're faster. In college, it feels like you have a little bit more time then you do here, so just getting a better feel for that I feel like has helped."

Pro Bowl linebacker Darius Leonard and running back Nyheim Hines were part of last season’s draft class, and on Sunday they can each join exclusive clubs.

Hines needs five receptions to surpass Hall of Famer Marshall Faulk for No. 2 among Colts running backs in their first two seasons. Faulk caught 108 passes in 1994 and 1995.

Leonard needs 12 tackles to surpass Jerrell Freeman (289) for the most by a Colts player in his first two NFL seasons. And Leonard has missed five games during that span.

Colts Pro Bowl left guard Quenton Nelson has not missed a game since being selected No. 6 overall in the 2018 draft. His streak could end this week. Nelson spent the week in the concussion protocol.