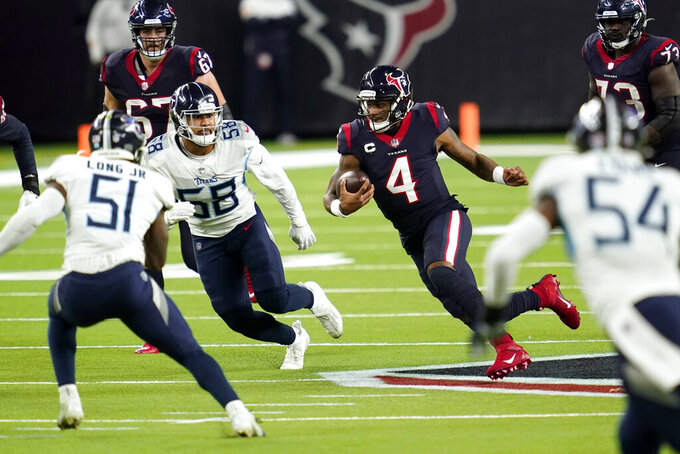 HOUSTON (AP) — Andre Johnson and DeAndre Hopkins have weighed in on reports that Deshaun Watson is unhappy and wants to be traded by the Houston Texans.

Reports from ESPN and the NFL Network surfaced last week that Watson was upset that owner Cal McNair didn’t take his opinion into consideration before hiring general manager Nick Caserio and wanted out of Houston.

Other reports indicated that Watson was further angered that the Texans hadn’t asked to interview Kansas City offensive coordinator Eric Bieniemy for their open coaching position. Houston has since requested to interview Bieniemy.

On Tuesday both Johnson, who is retired, and Hopkins, who Bill O’Brien traded to Arizona in March, expressed their views on the situation on Twitter.

Johnson, who was drafted in the franchise’s second year and had 13,597 yards receiving in 12 seasons in Houston, voiced support for Watson and criticized Jack Easterby, the team’s executive vice president of football operations. Johnson is the only player in Houston's Ring of Honor and worked as a special adviser to the team before stepping away from that role before this season.

“If I’m @deshaunwatson I will stand my ground,” Johnson tweeted. “The Texans organization is known for wasting players (sic) careers. Since Jack Easterby has walk (sic) into the building nothing good has happened in/for the organization and for some reason someone can’t seem to see what’s going on. Pathetic!!!”

Not long after Johnson’s tweet, Hopkins, who spent seven seasons in Houston, retweeted it and added: “When Dre speak listen.”

Easterby was brought in by O’Brien and some have questioned the amount of power the former chaplain for the Patriots has acquired since O’Brien’s firing. O’Brien served as the team’s coach and general manager before being fired after Houston’s 0-4 start this season. He was widely criticized for trading Hopkins, who has been one of the league’s most consistent receivers for years, for running back David Johnson and draft picks.

Watson was selected to his third straight Pro Bowl this season and set franchise records by throwing for an NFL-leading 4,823 yards with 33 touchdowns. His play was one of the few bright spots in a season where the Texans sunk to 4-12 after winning the AFC South the previous two seasons.

Watson hasn’t spoken publicly about his future, but called for a “whole culture shift” in the organization the day after the season ended and said the team needed discipline.

The 12th overall pick in the 2017 draft, Watson signed a four-year, $156 million contract extension before this season.