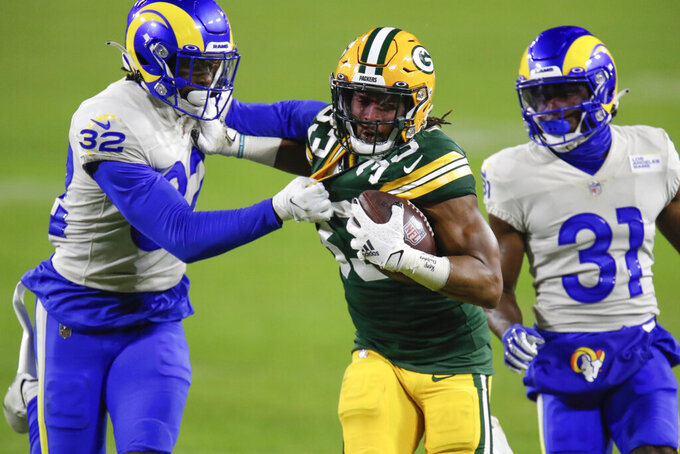 File-This Jan. 16, 2021, file photo shows Green Bay Packers' Aaron Jones (33) being chased down by Los Angeles Rams' Jordan Fuller (32) and Rams' Darious Williams during the second half of an NFL divisional playoff football game in Green Bay, Wis. The Pro Bowl running back, Jones has agreed to a new deal with the Green Bay Packers and wonâ€™t be exploring free agency. Drew Rosenhaus, Jonesâ€™ agent, confirmed that his client had agreed on a four-year deal worth $48 million that includes a $13 million signing bonus. (AP Photo/Matt Ludtke, File)

As he prepared to enter free agency, Pro Bowl running back Aaron Jones feared his disappointing performance in the NFC championship game might end his tenure with the Green Bay Packers.

His mother reassured him.

The Packers announced Friday they had re-signed Jones, nearly two weeks after agent Drew Rosenhaus disclosed that the Pro Bowl running back had agreed to terms on a four-year, $48 million deal with a $13 million signing bonus.

“I feel like this is a perfect fit for me,” Jones said. “I’ve been in this offense. I know what comes with it. I know my teammates here, and we feel like we have unfinished business, so I just feel like it was the right fit for me.”

Jones, 26, took a hit from Tampa Bay’s Jordan Whitehead early in the second half that caused a fumble that set up a Bucs touchdown. Jones injured his chest on the play and was unable to return to the game, so he finished with just six carries for 27 yards and four receptions for 7 yards.

Had that marked his last game in a Packers uniform, it would have marked a heartbreaking finish to an exhilarating four-season tenure in Green Bay.

“Going through my mind, I’m like, ‘Man, is this the way my career’s going to end in Green Bay and in Lambeau?’" Jones recalled. “I definitely didn’t want to finish my (Packers) career like that here, and I’m just blessed to be able to come back and suit back up here.”

Rosenhaus said he anticipated Jones getting bigger offers if the running back had entered the free-agent market, though Jones indicated that might not necessarily have been the case.

“It’s more money than my previous contract,” the 2017 fifth-round pick from UTEP said. “And if you continue to work, it will be there.”

Jones would have been the top running back available after what he’d accomplished the past couple of seasons.

Jones and Hall of Famer Jim Brown are the only players in NFL history to rush for more than 3,000 yards and 35 touchdowns and average at least 5 yards per carry over their first four seasons. His career average of 5.17 yards per rush ranks fifth all time among all NFL players with at least 600 career carries.

“I feel like I haven’t even scratched the surface to enter the prime yet,” Jones said. “I feel like I’ve still got a lot of growing to do, and I think it’s going to be scary for a lot of people.”

Jones was one of several notable Packers who could have become free agents this year. The Packers have managed to hang on to most of them.

They signed defensive tackle Kenny Clark to an extension at the start of training camp last year and extended the deal of All-Pro left tackle David Bakhtiari at midseason. They reached a deal with cornerback Kevin King this week in a move the team announced Friday.

Williams’ departure means Jones will be teaming up in the backfield with A.J. Dillon, the 2020 second-round pick from Boston College who dealt with COVID-19 for much of his rookie year, but rushed for 124 yards in a late-season victory over the Tennessee Titans.

“He’s already showcased a little of the things that he can do,” Jones said. “I think we complement each other really well. I feel like it’s going to be a good year.”