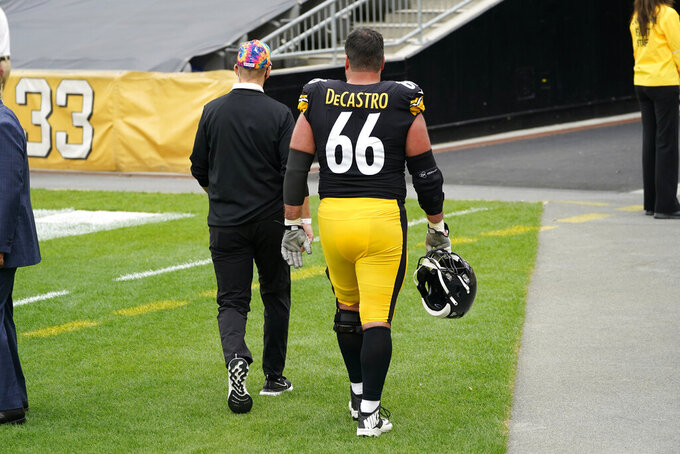 Pittsburgh Steelers offensive guard David DeCastro (66) walks off the field during the first half of an NFL football game against the Philadelphia Eagles, Sunday, Oct. 11, 2020, in Pittsburgh. (AP Photo/Keith Srakocic) 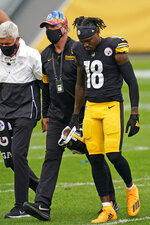 The AFC North-leading Steelers (4-0) ruled both players out for the showdown with the surging Browns (4-1) due to injury.

DeCastro left last Sunday's win over Philadelphia with an abdominal injury and did not practice this week. This marks the third game DeCastro has missed this season. He sat out the opening two weeks while dealing with a knee injury. Rookie fourth-round pick Kevin Doston will start in place of DeCastro.

Johnson, Pittsburgh's second-leading receiver behind JuJu Smith-Schuster, injured his back on a punt return in the first quarter against the Eagles. Johnson sat out Wednesday's practice and was a limited participant on Thursday before sitting out again on Friday. Johnson's absence means more snaps for both rookie Chase Claypool and Ray-Ray McLoud. Claypool is coming off a four-touchdown performance against Philadelphia.

All the other players who missed portions of practice this week, including center Maurkice Pouncey (foot) and tight end Eric Ebron (hand), are expected to play.