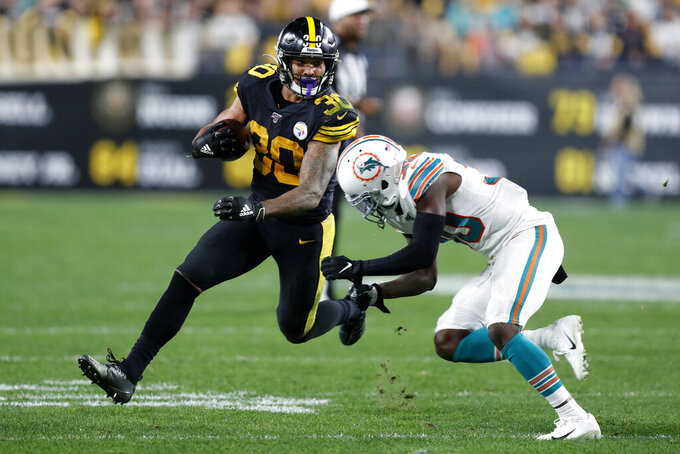 Pittsburgh Steelers running back James Conner (30) runs around Miami Dolphins defensive back Chris Lammons (30) during the second half of an NFL football game in Pittsburgh, Monday, Oct. 28, 2019. (AP Photo/Keith Srakocic)

PITTSBURGH (AP) — JuJu Smith-Schuster was covered. Blanketed actually. Mason Rudolph didn't care. The Pittsburgh Steelers quarterback flicked a pass down the left sideline and trusted Smith-Schuster to do the rest.

As the ball dropped out of the sky, Smith-Schuster's downfield wrestling match with Miami defensive back Chris Lammons suddenly became one-sided, with Smith-Schuster creating just enough space to haul in a 26-yard touchdown that put the Steelers in front on their way to a 27-14 victory over Miami on Monday night.

It was the kind of play Smith-Schuster made with regularity during his first two seasons in Pittsburgh when the passes were coming from Ben Roethlisberger. That hasn't always been the case this fall with Rudolph and Devlin Hodges filling in for Roethlisberger while he recovers from right elbow surgery. Stretching the field has been an issue for the Steelers through the first two months, a mixture of inexperienced quarterback play and the inability of the wide receivers to be difference makers.

After a sudden outburst against the winless Dolphins — when the Steelers scored 24 points in a span of 21 minutes — there's hope the training wheels might be ready to come off.

"We knew we wanted to be more aggressive as an offense," Rudolph said after throwing for a career-high 251 yards and two touchdowns. "We have a lot of people who are capable of doing that. I think (Smith-Schuster) stepped up in those big situations, like he's always done and capitalized on those combat catches."

He wasn't the only one. Rookie Diontae Johnson again showed a knack for creativity in the open field, scoring on a 45-yard sprint when Miami inexplicably decided to blitz on third-and-20. James Washington hauled in a 21-yard pass and also unleashed a handful of crunching blocks that gave his teammates room to run.

They were the kind of plays Pittsburgh knows it will need to produce more regularly if it wants to have any shot at keeping AFC North-leading Baltimore within striking distance. They're the kind of plays the Steelers have made regularly through the years when Roethlisberger was in the lineup. They understand it's time to do the same for Rudolph, who overcame some shaky moments in his return from a concussion to complete 20 of 36 passes, seemingly growing more confident with each throw.

"All it takes is that one big play for him," Washington said. "His mind is going. He's got that adrenaline and when we get to moving the ball down the field running and passing, (we can go)."

The only caveat in Pittsburgh's performance? It came against the woeful Dolphins. Still, the Steelers are confident their play on Monday night is indicative of what they can do when they get going, not the byproduct of playing possibly the worst team in the league.

"You saw Mason move around the pocket a little bit in the first half, settle in and make some nice throws," guard David DeCastro said. "Nice throws, nice catches by the guys. It was kind of a fun, all-around game. Good passing, good throwing, good protection."

Safety Minkah Fitzpatrick is looking every bit worthy of the investment the Steelers made when they sent a first-round selection in next year's draft to Miami last month. Fitzpatrick intercepted Dolphins quarterback Ryan Fitzpatrick twice, making him the first player in the Super Bowl era to have multiple picks against a team he played for earlier in the season.

"Every single time you see me making plays, that's me doing my job," Fitzpatrick said. "It's being on the details. If it's a sack or sack-fumble or punching the ball out, a pick, hey, everybody is just doing their job."

The return game remains nonexistent. Nearly halfway through the season, Pittsburgh's longest kickoff return is 25 yards and the longest punt return is all of 13 yards, both by Ryan Switzer. The issue might not be who's catching the ball but who's blocking.

Linebacker T.J. Watt worried his ab injury would keep him out of the lineup against Miami. Hardly. He had two sacks, forced two fumbles — recovering one of them — and was a menace in the second half when Pittsburgh's defense went into attack mode after taking the lead.

Tight end Vance McDonald figured to be an important part of the offense, particularly as a security blanket for Rudolph. After scoring two touchdowns against Seattle — both on passes from Rudolph — McDonald has just eight catches for 69 yards over his past four games.

Running back James Conner's first 100-yard performance in 12 games ended with him leaving the game with a shoulder injury. His status for Sunday's visit by Indianapolis (5-2) is uncertain. ... Guard Ramon Foster is in the concussion protocol after leaving in the first half against the Dolphins.

1: That's the number of coaching challenges won by Mike Tomlin over the past two seasons, the victory coming on Monday night when he successfully challenged the spot of the ball following a fourth-down scramble by Ryan Fitzpatrick.

Try to get to .500 for the first time this season by beating the Colts for the sixth straight time. The schedule eases up over the second half and considering the bumpy road Pittsburgh has endured, simply being in the conversation at the midway point would be an accomplishment.