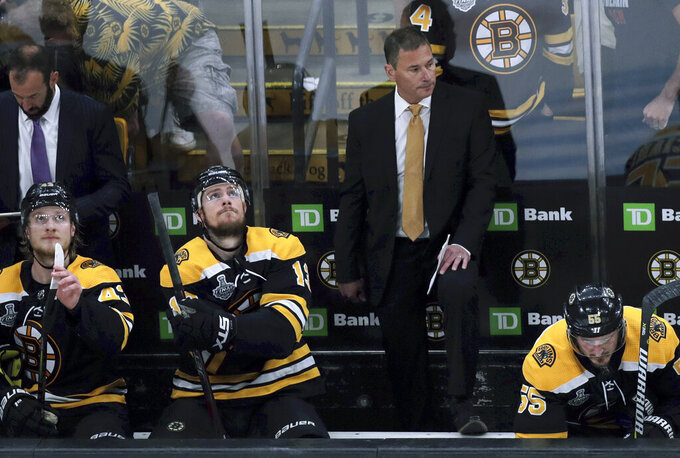 BOSTON (AP) — The Boston Bruins will look back on a miserable three minutes all summer.

The Bruins had it all lined up: a raucous home crowd as they hosted the first Game 7 of a Stanley Cup Final in their 95-year history and a fast start that provided a handful of excellent scoring chances in the opening period against a St. Louis team that looked out of sorts and on its heels for a second straight game.

Then in a matter of three minutes, because of a slow line change and a bad turnover by forward David Pastrnak, the momentum was gone.

The Blues stunned the Bruins with two quick goals, took that 2-0 lead into the first intermission and cruised to a 4-1 win Wednesday night to celebrate their first championship.

"It's hard to find words," 42-year-old captain Zdeno Chara said, fighting back tears and still healing from a badly injured jaw. "It's not easy. I'm sure everyone pictured it differently and we believed that it was there for us. That's sports. You've got to kind of take those and move on."

The Bruins outshot the Blues 12-4 in that first period, 23-10 through two and 33-20 overall. They were delivering punishing hits and, in the first 40 minutes, largely dictating play. It didn't matter.

"It's 20 minutes. I think we've come back and we had confidence in ourselves," Boston goaltender Tuukka Rask said of that first intermission. "That's what we were saying. Obviously, it's shocking when you dominate a period and you're still down 2-nothing, but we still had 40 minutes to go."

Rask made 16 saves — the first time his save percentage was below 90 percent in a game the entire postseason. His career record fell to 3-3 in Game 7s.

Also gone was the city's chance for its 13th championship since 2002. The Bruins were looking for their seventh title overall and one that would have joined the New England Patriots' six, four by the Red Sox and one each by the Celtics and Bruins in the last 17 years.

After Patriots Super Bowl MVP Julian Edelman and Olympic champion gymnast Aly Raisman — both wearing David Ortiz jerseys as the honorary flag bearers and a nod to the wounded Red Sox great — came out and fired up the crowd, Boston came charging out quickly.

The Bruins were handed a power play on a delay of game penalty by defenseman Colton Parayko 7:57 into the game and they certainly had their chances throughout the opening 10 minutes of the game.

Brad Marchand, the team's leading scorer in the postseason, was robbed by Jordan Binnington on a wrister from the slot. After the penalty was over, David Krejci cut in alone and Binnington flashed his right pad to rob his backhander from the edge of the crease. They had another excellent chance when Marcus Johansson came charging in alone from the right circle, but Binnington dove out to make the stop.

"I would have liked to be better, but that's how it is," said Marchand, who was held without a point in Games 2, 5 and 7 — all losses at home.

Boston seemed to fall apart defensively late in the period. On slow change, the Blues collected the puck in the neutral zone and defenseman Jay Bouwmeester fired a shot from the point that Ryan O'Reilly tipped between Rask's pads at 16:47.

"It takes one goal to get going to swing that momentum, we just didn't get that one early enough," Marchand said.

In the closing seconds, Pastrnak gave the puck up in his own end. Jaden Schwartz sent a pass to Alex Pietrangelo and the defenseman beat Rask with a backhander to the blocker side from the slot with eight seconds left.

"They did what they had to do to get the puck in the net and we didn't in the first period," Boston coach Bruce Cassidy said.

It was the Blues' night from then on. They even showed 2004 World Series star Curt Schilling on the Jumbotron flashing his championship ring. Boston was searching for its first title since 2011 when it beat Vancouver on the road in Game 7, but nothing worked and the Blues added two third-period goals before Matt Grzelcyk ended Binnington's shutout bid in the final minutes.

Rask had stopped 82 of 86 shots in Boston's three elimination games this season (twice in the opening round against Toronto and Game 6 in St. Louis) but the Blues got to him early and made it stand up.

"It's an empty feeling," Cassidy said. "It's a long year. Someone had to win it and someone had to lose and we came out on the wrong side of it. It's not the way you picture it."