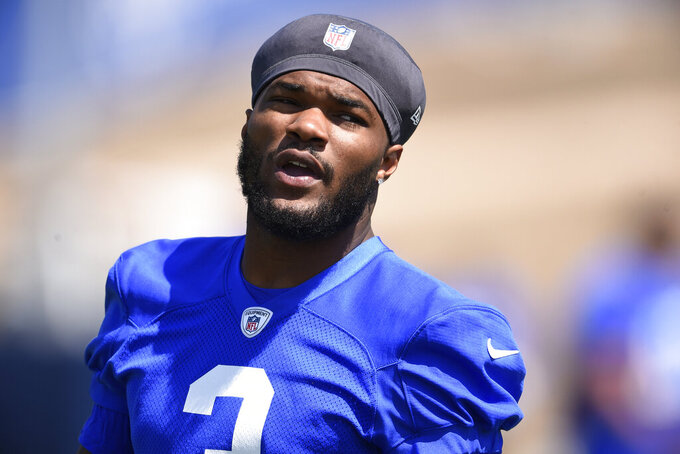 FILE - Los Angeles Rams' Cam Akers warms up during NFL football practice in Thousand Oaks, Calif., on May 27, 2021. Akers has returned to practice with the Rams, taking one of the final steps in his rapid comeback from a torn Achilles tendon. (AP Photo/Kelvin Kuo, File)

LOS ANGELES (AP) — Running back Cam Akers has been cleared to practice with the Los Angeles Rams, taking one of the final steps in his rapid comeback from a torn Achilles tendon.

The Rams (10-4) also designated Akers for return from injured reserve Thursday, which means he is in a 21-day window for reactivation to the roster. Coach Sean McVay won't predict when Akers will play, but he expects the second-year pro to be added to the roster within the window while Los Angeles makes its playoff push.

“What a resilient, tough-minded guy,” McVay said. “It’s an incredible story. Can’t wait to get him back out there. When that is, is something we're going to continue to work through, but the guy is a stud in every sense of the word.”

Akers was the Rams' leading rusher as a rookie last season, but he tore his Achilles tendon in private workouts shortly before the start of training camp in July. The team initially expected the second-year pro to miss the entire year, but he made rapid progress in his rehabilitation workouts and spurred hopes he could return late in the season.

McVay said Akers won't play Sunday at Minnesota, but he seems likely to be in uniform at some point this year for the Rams, who are even with Arizona (10-4) atop the NFC West.

Los Angeles, which is in the first wild-card playoff position, travels to Baltimore next week before finishing the regular season at home against San Francisco.

“There’s still some levels to this,” McVay said. “We want to be smart and check all the boxes.”

Akers' comeback is remarkably fast, even for a 22-year-old elite athlete in prime physical condition. McVay said team doctors and surgeons have told the Rams they aren't risking Akers' long-term health to move him forward quickly, and Akers has been itching to participate in the Rams' solid season.

Immediately after the injury happened in the summer, McVay cheered up Akers by comparing him to Artur Dalaloyan, the gymnast who helped Russia to win the men's team final at the Tokyo Games four months after tearing his Achilles tendon at the European Championships.

“We had an idea that if he stayed on track ... I was giving him a hard time about some of those Russian gymnasts that were freakin' making a comeback from the Achilles and performing in the Olympics,” McVay said with a grin. “But no, I'd say we had an idea that he was accelerating his rehab and making great progress. He's a freak.”

Akers racked up 625 yards rushing in 2020 despite not getting consistent playing time until the second half of the season. The second-round pick out of Florida State showed impressive speed and toughness down the stretch — and he blossomed in the playoffs, where he rushed for 131 yards at Seattle and 90 yards at Green Bay, scoring a touchdown in both games.

He was expected to be Los Angeles' primary running back this season, but the injury led the Rams to acquire Sony Michel in a trade with New England.

Darrell Henderson leads the Rams this season with 671 yards and five touchdowns despite missing three games and being limited in others because of injury. The hard-nosed Michel has been Los Angeles' most effective back lately, with 292 of his 597 yards coming in the past three games.

“It's good to have a lot of good depth at that position and be able to have some fun things that we can do moving forward,” McVay said.

The Rams' running game has been solid, but is secondary to their strong passing game led quarterback Matthew Stafford and NFL receiving leader Cooper Kupp. Los Angeles' eight rushing touchdowns are tied for the second fewest in the league.