Cardinals' Peterson to those who doubt him: "Wait and see" 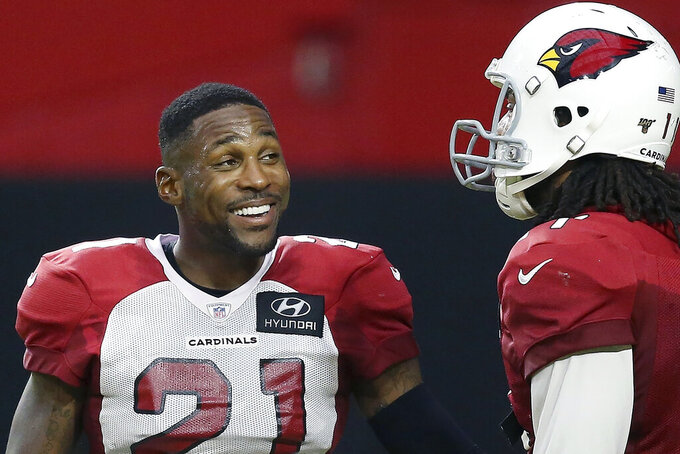 FILE - In this Aug. 6, 2019, file photo, Arizona Cardinals cornerback Patrick Peterson (21), left, and Cardinals wide receiver Larry Fitzgerald talk during an NFL football training camp practice at State Farm Stadium in Glendale, Ariz. Peterson believes the team can be among the NFL's elite this fall. Peterson is in the final year of a five-year contract and hopes to stay with the Cardinals for the remainder of his career. (AP Photo/Ross D. Franklin, File)

Patrick Peterson is about six weeks shy of his 30th birthday. Judging by a modest decline over the past few seasons, it's easy to believe his best playing days are behind him.

“I can promise you this: This is definitely going to be a big year,” Peterson said. “Just wait and see. Whoever's doubting me or doesn't think I can play at a high level — just wait and see.”

Peterson — who made the NFL's all-decade team in April — was one of the league's most durable and feared cornerbacks from 2011 to 2017, but hasn't been quite the same player since coach Bruce Arians left following the 2017 season. The three-time All-Pro missed the first six games of last season for violating the NFL’s performance-enhancing drug policy and was inconsistent when he returned.

That's made Peterson a bit of an afterthought on a team that's building around young quarterback Kyler Murray and second-year coach Kliff Kingsbury. The defense returns two Pro Bowl players, including linebacker Chandler Jones and safety Budda Baker, and drafted do-everything linebacker Isaiah Simmons with the No. 8 overall selection in April.

The Cardinals finished with a 5-10-1 record last season, but they are a trendy pick to push for a playoff spot this fall. If Peterson is back to something close to his old form, those expectations would be even more realistic.

“We have everything that you need,” Peterson said. “If you're trying to build a championship-caliber football team, I believe we have the players and this is that type of roster.”

Peterson is in the final season of a five-year, $70 million deal and says he would love to stay with the Cardinals for the remainder of his career. He relishes being a veteran on a team that includes the 5-foot-10 Murray — whom the cornerback jokingly referred to as “Mighty Mouse” — and is clearly trying to win big in the near future.

“I'm very optimistic something will get done,” Peterson said. “I love it here. The front office would love for me to be here because they know what I bring to the table. Not only my leadership, but on the football field, the classroom and the locker room.”

The Cardinals are trying to get back to the postseason for the first time since 2015 when they went 13-3 and advanced to the NFC Championship. Peterson said the current situation reminds him of those days, when the team built momentum with a good core and won at least 10 games for three straight seasons from 2013 to 2015.

“In the NFL, you only have so many windows,” Peterson said. “You have to take advantage of those. I was a part of one of those windows a couple years ago and I definitely feel that this can be a window that's wide open.”

The drive for team success is on Peterson's mind but so is his individual performance. He's ready to remind people that he's still a defensive force that other teams have to respect.

“I've got a chip on my shoulder that's bigger than it's ever been," Peterson said. "With this being my 10th year, I'm very optimistic. I can feel something special.”