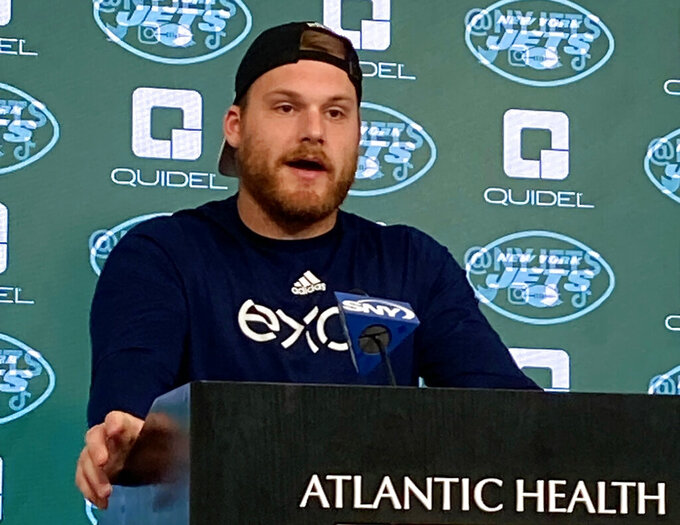 FLORHAM PARK, N.J. (AP) — Gavin Greene always imagined celebrating this moment with his famous father by his side.

Life had other plans.

Kevin Greene is still there, though — forever — as the late Pro Football Hall of Famer's son pursues his NFL dream as a tryout player with the New York Jets.

“What's my dad thinking? Oh, he’s probably going to give me a bear hug and give me a head-butt,” a grinning Gavin Greene said. “You know, I’m sure my dad’s smiling down from heaven right now, just so happy that, you know, despite his passing and all the adversity I’ve been through with that, that I have overcame it and I’m here now.”

Kevin Greene was one of the greatest pass rushers in NFL history and one of the league's most popular players during a 15-year career that took him from Los Angeles with the Rams to Pittsburgh, Carolina, San Francisco and back to Carolina before he ended up in Canton, Ohio, in the Pro Football Hall of Fame.

His long, blond hair flowing from his helmet was iconic. His 160 career sacks made him a legend of the game.

“My dad, I love my dad,” Gavin said. “Me and my dad, even though his time on this planet was cut short, we lived a thousand lifetimes together. My dad is my biggest hero and will stay as my biggest hero to this day.”

The two shared an unshakeable father-son bond. They were buddies who rooted each other on. And Kevin was a role model to Gavin, who saw how others would often greet his father — “the most gentle giant,” his son called him — with huge smiles and great stories filled with laughs about his on-field exploits and his days dabbling in pro wrestling.

“Everybody who knew my dad comes up to me and tells me how great of a man he was and how great of a player he was,” Gavin said. "And so many stories that even my dad was not able to tell me. You know, he didn’t get to that point to tell me yet. And it’s great to hear those stories. I mean, it’s such an honor.”

Those tales continue today — and Gavin can't get enough.

“It makes me so proud to be his son,” he said. “Like, I’m already so proud to have him as my father. But it just brings so much joy to my heart.”

As the son of a former NFL All-Pro, Gavin's path to football seemed inevitable. But it wasn't immediate.

His parents had him try various sports, with Kevin not once pushing Gavin toward football. But in the seventh grade, the younger Greene got on the gridiron — and fell in love.

“He never wanted me, younger, to face that pressure because he knew he was one of the best linebackers,” Gavin said. “I mean, 160 sacks. That’s some pretty big shoes to fill, you know what I mean? But he made sure that I had no pressure.”

Gavin found his own way as a football standout at Niceville High School in Florida and landed at Southern Miss before transferring to Mississippi College. Kevin helped Gavin train along the way, giving him tips on how to become better while making his son's NFL dreams seem more attainable.

“My dad was one of my biggest coaches throughout my life,” the younger Greene said.

Today, the 24-year-old Gavin is 6 feet tall — 3 inches shorter than his father — and 250 pounds. He has played linebacker and defensive end, but is in Jets rookie camp working on the D-line. His dirty blond hair is short, unlike his dad. But he certainly sounds a lot like him.

And with the Jets, Gavin is spending time in the same meeting rooms and stepping on the same fields as his father did as an assistant with New York during the 2017 and '18 seasons under then-coach Todd Bowles.

“The fact that, you know, I’m here and like I’m here in this facility that he walked in and been in the same places he’s been here, that’s awesome,” Gavin said. “I mean, it’s such an honor and following my father’s footsteps now, I mean, it’s the biggest honor I think a kid could have. I'm just overjoyed at that thought.”

As an undrafted and unsigned free agent, Gavin Greene remains a long shot to make it onto New York's roster beyond the weekend. But he has overcome a lot of adversity just to get here.

And with his father always in his mind and heart, he knows he can never be counted out.

“It feels amazing. I mean, there’s no other place I’d rather be," Gavin said. "I love football. It's awesome to be able to chase a dream that I’ve had since I was young. And being here with the guys and working at the professional level is amazing. I mean, no words to describe how great it is.”