Leave the lakefront? Bears fans have mixed emotions on that 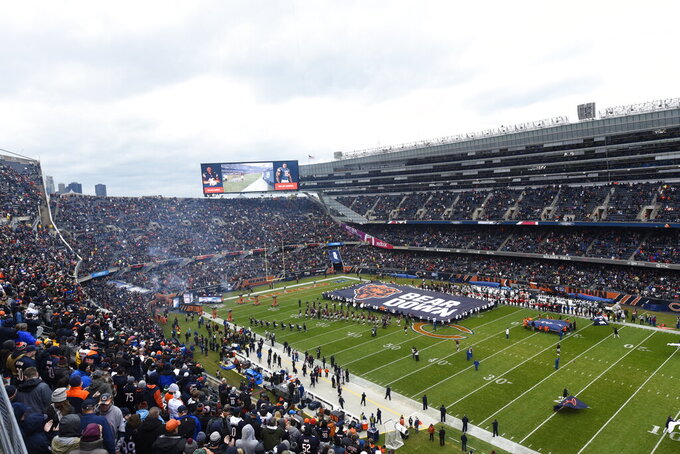 FILE - In this Oct. 28, 2018, file photo, fans wait for an NFL football game between the Chicago Bears and New York Jets at Soldier Field in Chicago. A potential move by the Bears from the lakefront stadium has been picking up steam in recent weeks, after the team announced a bid to purchase Arlington International Racecourse. The famed thoroughbred track in the village of Arlington Heights sits about 30 miles northwest of Soldier Field on a 326-acre plot of land owned by Churchill Downs Inc. that is for sale. (AP Photo/Matt Marton, File)

CHICAGO (AP) — For years, Graham Alexa had one of the cheapest views at Soldier Field.

He and 40 or 50 friends from Chicago's South Side would stand against a cement wall behind the last row by the colonnades in the old stadium and by a section on the lower level near the north end zone following the renovation, only they didn't buy tickets to watch their beloved Bears.

They would scatter into smaller groups outside and sneak into the game, Alexa said, then gather at their familiar spot. The group basically had a free ride from 2000 to 2009.

“Never got caught, except for once,” Alexa said. “One buddy, Pat McCaskey caught him and threw him in Bears jail in the basement. (McCaskey) said, ‘You are banned for life. Come within 500 feet of the stadium, you will be taken to jail.' My buddy’s response to him was, ‘I’ll see you next weekend at the game, Pat.'"

Fond memories, for sure. But when it comes to the possibility of the Bears leaving their iconic lakefront home for the Chicago suburbs, Alexa is onboard — gut wrenching as it might be.

The idea has been picking up steam in recent weeks, after the team announced a bid to purchase Arlington International Racecourse. The thoroughbred track in Arlington Heights is about 30 miles and a world away from Soldier Field in downtown Chicago, on a 326-acre plot of land owned by Churchill Downs Inc. that is for sale.

A potential move has at least some fans excited about the possibilities even if seeing a founding NFL franchise move out of the city it has called home for a century would be tough. They envision a world-class stadium, maybe one with a dome or retractable roof that would attract Super Bowls and Final Fours, and come without the challenges the current home presents its team and diehard fans.

They see a chance for the Bears, established in 1920 as the Decatur Staleys, to own their home. Since moving to Chicago in 1921, the franchise has never had its name on the mortgage, whether playing at Wrigley Field from 1921 to 1970 or Soldier Field since then.

Andy Buchanan, a longtime season ticketholder who lives in the city, called a possible move to the suburbs “a travesty." He said it “would be horrible,” but also understands why ownership is at least considering leaving its home along Lake Michigan.

“The inside of the stadium is fine,” Buchanan said. “The location was just poorly planned out.”

The Bears' lease at Soldier Field runs through 2033. The stadium owned by the Chicago Park District underwent a $690 million transformation in 2002 that forced the team to play home games at the University of Illinois in Champaign and ultimately led to the loss of its National Historic Landmark designation.

The interior was demolished, replaced by a flying saucer-like, glass-dominated structure cantilevered over the famous Greek and Romanesque colonnades. The clash of styles drew widespread criticism, and the renovation reduced seating for Bears games to 61,500, lowest in the NFL.

“It was a very, very sad thing to happen, particularly on the lakefront, which is supposed to be sacrosanct," said David Bahlman, the former president of Landmarks Illinois, a nonprofit organization that promotes historic preservation.

Bahlman fought hard to prevent the renovation. The group proposed building an 80,000-seat stadium with a retractable roof just north of the Chicago White Sox ballpark on the South Side — with easy access to the Dan Ryan Expressway and two “L” lines — and using a restored Soldier Field for soccer, concerts and festivals. They sued to stop the work at Soldier Field, only to have the state Supreme Court rule against them.

“It's bittersweet,” said Bahlman, who moved away in 2008 and now lives in North Carolina. “It's discouraging because we told them all the reasons why they shouldn't renovate Soldier Field 20 years ago. They didn't listen to us. And now, they're not happy with the things we told them were deficient in the Soldier Field plan.”

The aesthetics aren't the only points of contention. Players and coaches have criticized the condition of the surface. Getting in and out of the stadium on game days can be difficult. The nearest “L” stop is about a mile away.

While Chicago Mayor Lori Lightfoot reiterated her commitment to keeping the team in the nation's third largest city, she also blasted the bid as a familiar negotiating tactic. The team explored moving to Arlington Heights in the 1970s and 1980s.

“I do think the landscape is different this time,” he said. “I do think the Bears are serious about this potential, much more so than they were in the 1970s.”

He mentioned the issues at Soldier Field and called the sale of the Arlington Park site “a once-in-a-lifetime opportunity for any developer.” He said with 160 acres for the stadium and associated parking, the Bears would have enough room to build dining and entertainment venues, hotels and residences or maybe keep the racetrack.

While “Monsters of the Suburbs” might not have the same ring as “Monsters of the Midway,” South Sider Todd Justic called moving a “no-brainer" for the Bears. He got fed up with Soldier Field and stopped going to games about three years ago because it “took us forever” to leave the last time he went.

Fred Berglund, whose family has held season tickets since the early 1950s, hopes the Bears stay.

He thought the old stadium was “terrible” and enjoys the amenities that came with the newer facility. He also prefers watching in the open air, even late in the season, and has no desire for a stadium with a dome or retractable roof. He also understands why the McCaskey family owners would consider a move.

“They could build their own empire,” Berglund said.