NFL at 100: Another labor stoppage looms in 2 years 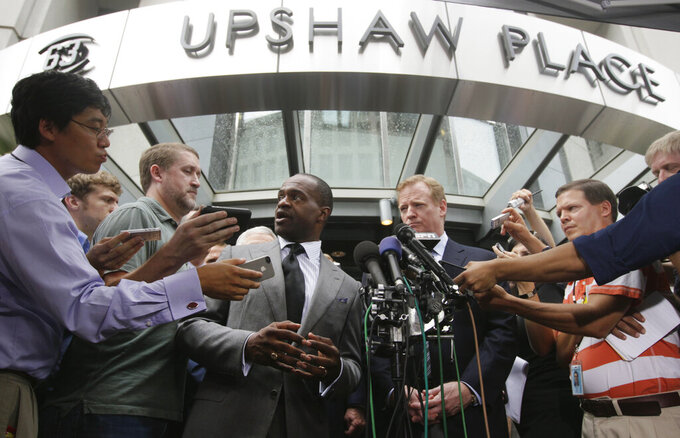 FILE - In this July 25, 2011, file photo, NFLPA Executive Director DeMaurice Smith, left, and NFL football Commissioner Roger Goodell speak during a news conference at the NFL Players Association in Washington, after the NFL Players Association executive board and 32 team reps voted unanimously to approve the terms of a deal with owners to the end the 4½-month lockout. (AP Photo/Carolyn Kaster, File)

NEW YORK (AP) — Eight years ago at this time, when the NFL was hitting a mere 91 and counting, discord between players and owners reached such a fevered state that the league locked out the union.

Two years from now, when the NFL heads into its 102nd season, it could happen again.

Yes, pro football as a business is healthy. Incredibly so, with revenues beyond $14 billion, TV ratings up and modern stadiums nearly everywhere. But the money-filled pot the league and its players share is beginning to heat up if not exactly boil. The boil could come in 2021, when the 10-year labor deal struck to end the 2011 lockout itself concludes.

It's difficult to argue that the current CBA hasn't been profitable for the people who own the 32 clubs and the hundreds of guys who play for them and are earning seven — and for some, eight — figures a year. It's also impossible to maintain that these are peaceful times overall, with the union and league at odds over nearly every issue, from players' rights to protest, to disciplinary powers for the commissioner, to roster size, to length of schedule.

The 2011 work stoppage seemed a certainty from the time in 2008 that the owners opted out of an agreement reached in 2006 — the final bargaining act between then-Commissioner Paul Tagliabue and union boss Gene Upshaw. Negotiations sputtered until just after midnight on March 12, 2011, when NFLPA President Kevin Mawae, in a simple text to The Associated Press, said "We are locked out."

And they were for 132 days into late July; there was a brief respite by court order that then was overturned. A deal probably could have been reached in a far shorter time, but the union complicated matters by decertifying so it could bring an antitrust lawsuit against the league.

"The lockout, it was not inevitable, it was likely," says Marc Ganis, president of Sportscorp, a Chicago-based consulting firm, and an adviser to several team owners. "All parties could demonstrate to their constituencies how strong their resolve was to fight for them. For the players, it became be careful what you wish for. They won the first round in a Minnesota court, then it was reversed. The original decision was flat-out wrong and that is why it was reversed. But all of that extended the period by which they were in court and not negotiating."

When there were negotiations, whether in Washington, New York, New England and points elsewhere, they tended to be contentious.

Then, as Ganis notes, "The calendar came up."

The sides had moved into July with some but not enough progress toward an agreement. Training camps were scheduled to open in a few weeks, followed by preseason games that, while despised by veteran players and ignored by lots of fans, are extremely lucrative for owners.

Both sides got serious, dropped the posturing and, by July 14, the parameters of a deal were reached. A week later, the owners voted 31-0 (Oakland abstained) to approve the 10-year CBA, and the players soon after ratified it.

"For the last five or six months, we've been talking about the business of football," said Patriots owner Robert Kraft, a key figure in the settlement. "But the end result is, we've been able to have an agreement that I think is going to allow this sport to flourish over the next decade."

Business-wise, it certainly has. The average NFL team is worth $2.57 billion; the least valuable NFL franchise is Buffalo at $1.6 billion. The average NFL player salary — skewed somewhat by the high price of quarterbacks — is more than $2 million.

Yet, the storm clouds are gathering. Each side is preparing funding — a war chest, if you will — for a potential labor stoppage.

"It's our job to prepare for wars we don't want to fight," NFLPA Executive Director DeMaurice Smith said during Super Bowl week.

"The NFLPA has a difficult job," adds Don Yee, one of the top NFL player agents who represents, among many others, Tom Brady. "Irrespective of the leader, it has been historically difficult for football players to stick together during any kind of labor effort. If the players want change and progress, they will have to stick together and be willing to make the necessary sacrifices.

"We all know the history of the strikes and stoppages and how many star players crossed picket lines. One of the strengths is that the current director, De Smith, no longer is a rookie. He now has the necessary experience. When he was selected, he had no experience, and that simply is a tough spot to be in."

The contentious issues will be many, of course. Yee, for one, lists these:

—"creating an entity that will have a source of funding that is solely for the benefit of the lifetime health of the players;

—"reforming the 'fine' and 'punishment' system;

—"reforming the entire free-agency system, including eliminating the salary cap and player 'tags';

—reforming the entire system regarding PEDs, substance use."

Ganis is among those who believe there is plenty of room for agreement.

"There are mutually beneficial deals that can be negotiated where fans get another game, players more money, players get a change in the disciplinary program," Ganis explains. "Where the broadcasters get more inventory, where there are more roster spots and more union jobs. Where there is more attention to player health and safety if that is even possible; they are paying a lot of attention to that.

"There is absolutely a compromise situation where everyone wins," he added. "That doesn't mean they will get there without the pain of negotiating."

Eric Winston, the union president, joked about any greed element, then also expressed optimism about the future.

"Money always will be a major point," he said. "We want 99 percent and they want us to have 0.1 percent. Where do we meet?

"But there might not be as big a bridge to build," he said.