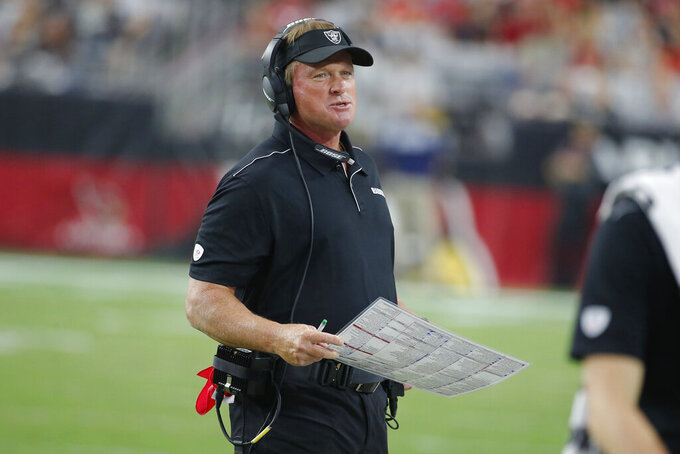 FILE - In this Aug. 15, 2019, file photo, Oakland Raiders head coach Jon Gruden is shown during an NFL preseason football game against the Arizona Cardinals in Glendale, Ariz. The Raiders’ worldwide tour gets started in the preseason when they play a "home" exhibition against Green Bay in Winnipeg on Thursday, Aug. 22. (AP Photo/Rick Scuteri, File)

Strengths: Raiders spent offseason adding targets on outside for QB Derek Carr. Brown is NFL's most prolific receiver past six seasons in Pittsburgh but has baggage as evidenced early in training camp with odd foot injury and dispute with NFL over banned helmet. Raiders hope those issues resolved by start of season and big-time playmaker can get Carr back to level of 2016 when he was MVP candidate. Williams provides another deep threat, rookie Renfrow and Grant are strong options in slot.

Weaknesses: Raiders finished last in NFL with 13 sacks after trading away star Khalil Mack. Improving that has been rallying cry all offseason but questions remain whether players are there to do it. Ferrell was surprise pick at fourth overall and projects as solid three-down end more than elite pass rusher. Second-year DE Arden Key needs major improvement and defense needs to get better inside push for success.

Fantasy Players To Watch: RB Josh Jacobs. Coach Jon Gruden vowed to run Jacobs plenty soon after drafting him, delighting fantasy owners. Jacobs had more than 15 carries in game twice in three seasons at Alabama but will be three-down back in offense that likes to run. Jacobs also skilled in passing game and will offer value as receiver as well.

Expectations: Raiders looking for positive send-off in final season in Oakland before planned move to Las Vegas. Competing in tough AFC West with Kansas City and Chargers will be difficult. But offense should be more dynamic with Brown and Williams out wide, Jacobs as main running back and Carr in second season in Gruden's system. Success will depend on 2018 first-round LT Kolton Miller giving Carr time to throw and defense taking major step forward behind young DL Ferrell and Maurice Hurst, and improved secondary led by CB Gareon Conley and Abram.