Who's No. 1? Top picks Murray and Mayfield ready for QB duel 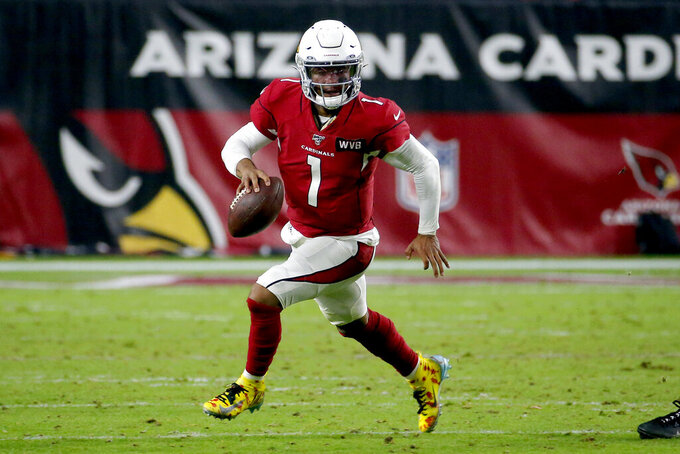 The two will always be linked by their similar back stories, similar skill sets and a similar career path, but it's hard to find a pair of NFL quarterbacks with more opposite personalities.

“Obviously,” Murray said with a grin. “We're a little different.”

Even so, the two friends are in total agreement that there's a little something extra on the line when Mayfield's Cleveland Browns travel to face Murray's Arizona Cardinals this weekend.

“This is real bragging rights being in the same quarterback room for a few years and just razzing each other back and forth,” Mayfield said.

“Yeah,” Murray said laughing after he heard about Mayfield's comment. “For sure.”

The former University of Oklahoma teammates — who are the two most recent No. 1 overall draft picks and Heisman Trophy winners —- will have different team stakes on Sunday. The Browns (6-7) need a win to stay in the playoff race while the Cardinals (3-9-1) are simply trying to gain momentum in their rebuild.

But the individual matchup is also intriguing.

The mutual respect between Murray and Mayfield is obvious. They became close after spending two seasons together at Oklahoma in 2016 and 2017 when Mayfield was the starter. Murray red-shirted the first season and was a backup in '17 when Mayfield won his Heisman.

Murray started in 2018 after Mayfield left for the NFL and made it back-to-back Heismans for the Sooners.

Murray said he learned a lot from Mayfield and even made a good-natured crack that the lessons included “what not to do.”

“To the public, obviously, he's kind of a rebellious guy,” Murray said. “But he's a great dude. I look forward to playing against him."

Both franchises have staked a large portion of their near future to the pair of young quarterbacks.

It can be argued that the Browns' willingness to draft Mayfield with the top pick in 2018 helped open the door for Murray.

Mayfield is a little smaller than the typical NFL quarterback at 6-foot-1 and 215 pounds and Murray is a more extreme example at 5-10 and 207 pounds. Mayfield transferred from Texas Tech to Oklahoma during his college career while Murray moved from Texas A&M to the Sooners. Both grew up in Texas.

“We both understand the background, what we stand for, the competitiveness,” Murray said. “Obviously, when you're with somebody as many days as we were with each other, you just get close.”

“I think Kyler is just a phenomenal athlete. He is one of a kind,” Mayfield said. “After being around him for a few years in practice watching him tear it up on scout team and then play, he is who he is. He is a special player.”

Cleveland coach Freddie Kitchens said Murray's ability to run is a “great attribute” and the rookie is doing a good job keeping defenses off balance.

“He is seeing the field well, and he is brave from the standpoint of he likes to fit balls in tight windows and things like that,” Kitchens said. "He kind of plays fearless, and that is the trait of good quarterbacks — smart but fearless — and I think he does a good job of that.”

Currently, the biggest difference between the two quarterbacks is the Browns are winning a few games. Cleveland has won four of its last five to keep its playoff hopes alive.

Arizona has lost six straight. Murray is trying to help the Cardinals climb out of their rut while fixing his own problems — he had three interceptions during the Cardinals' 23-17 loss to the Steelers last week.

“The things he is able to do when he throws the ball, it comes out different,” Mayfield said. “When you see it in person, you will understand what I am talking about.”