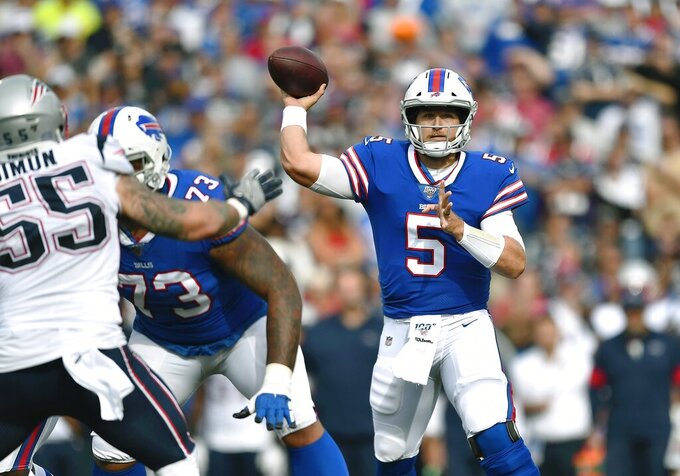 ORCHARD PARK, N.Y. (AP) — Unsure of Josh Allen's status after being placed in the NFL's concussion protocol, Buffalo Bills coach Sean McDermott says there's plenty of "internal belief" in Matt Barkley should the backup have to start at Tennessee this weekend.

McDermott provided no other updates on Allen's status Monday. The second-year starter was hurt a day earlier following a helmet-to-helmet hit with New England's Jonathan Jones in the opening minute of the fourth quarter of a 16-10 loss to the Patriots.

Barkley closed by going 9 of 16 for 127 yards passing and a game-sealing interception against New England as the Bills dropped to 3-1.

The seven-year journeyman signed with Buffalo last October and started two weeks later in place of Allen, who was sidelined by an injury to his throwing elbow. Barkley went 15 of 25 for 232 yards and a touchdown in a 41-10 win over the New York Jets on Nov. 11.

The performance led Buffalo to sign the 29-year-old to a two-year contract extension. The former college star at Southern California has just seven starts, including six with Chicago in 2016, over 12 games.