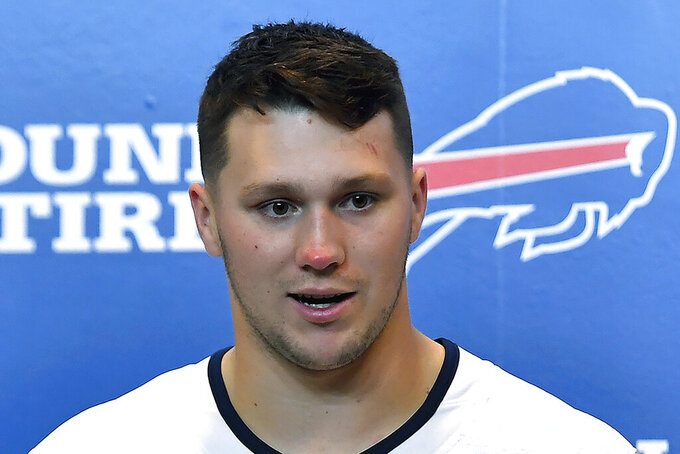 FILE - In this Oct. 20, 2019, file photo, Buffalo Bills quarterback Josh Allen speaks to the media following an NFL football game against the Miami Dolphins, in Orchard Park, N.Y. Allen earned praise for continuing to grow into a team leader by organizing several workouts with teammates during the coronavirus pandemic-altered offseason.(AP Photo/Adrian Kraus, File)

The Buffalo Bills quarterback, instead, kept himself busy in seeking advice from Peyton Manning and Brett Favre on Zoom calls, to gathering his teammates together for workouts on both coasts.

It’s all been done with an intent to continue developing into a team leader entering his third season, and smooth the inconsistencies that have hampered Allen and the offense’s production.

What fuels Allen is the still stinging memory of his up-then-down performance in a 22-19 overtime loss to Houston in an AFC wild-card playoff, in which the Bills squandered a 16-0 third-quarter lead.

“I was talking about it last night, so I’m definitely not over it,” Allen during a Zoom conference call with Buffalo-area reporters Thursday.

He was efficient in the first half by going 13 of 20 for 131 yards and catching a touchdown pass, before unraveling in going 11 of 26 for 133 yards and a lost fumble the rest of the way.

It was a performance which encapsulated the best and worst of Allen, the Bills 2018 first-round pick, who has yet to shed his pre-draft reputation of being a strong-armed, but raw product with accuracy issues.

“I’ve got personal goals set out for myself,” Allen said, noting his 11-0 career record when completing 60% or more of passes in games he starts and finishes.

The test for Allen this offseason has been finding ways to improve without the benefit of on-field practices, with the pandemic wiping out the NFL’s entire spring schedule.

He began by seeking advice from former Dallas Cowboys quarterback Tony Romo, whom he met at the Super Bowl. It continued with offensive coordinator Brian Daboll inviting Favre — Allen’s childhood idol — and Manning to provide tips during the Bills’ virtual quarterbacks meetings.

Allen then took it upon himself to organize a workout with Bills offensive rookie draft picks in California in early May, followed by bringing together 19 offensive players for workouts in Miami a few weeks later.

“He’s our quarterback, but you can’t force leadership. You can improve it, you can learn about it. You can grow from it,” Daboll said. “But Josh has innate leadership qualities that guys gravitate toward, and he understands his role on the team.”

Added McDermott: “It’s a critical step that he took it upon himself and his own initiative to put this together.”

The Miami workouts were particularly important because they marked the first time Allen was able practice throws with receiver Stefon Diggs, the dynamic threat acquired in a trade with Minnesota in March.

“It was very, very awesome to see just the amount of detail he puts into his craft, how communicative he was, how willing he was to learn,” Allen said of Diggs, noting they first got to know each other from afar by playing video games. “He’s such an explosive player and a great player, and he’s going to add a lot to our offense.”

Scoring more points was general manager Brandon Beane’s objective behind acquiring Diggs, who joins a well-established group of receivers rounded out by John Brown and Cole Beasley. Despite a 10-6 finish, the Bills scored 21 or more points just six times and ranked 23rd in the NFL in scoring and 24th in yards offense.

Allen made significant strides from his rookie season by showing poise and patience in the pocket, rather than sprinting off at the first sign of pressure. He did benefit from playing in front of a sturdier and rebuilt line, which featured four newcomers, including center Mitch Morse.

Allen doubled his touchdowns passing total to 20 and threw only nine interceptions (down from 12 the previous year). Though he enjoyed a six-point jump in completing 58.8% of his passes, Allen still ranked last among NFL starters.

Allen particularly credited Romo for providing tips that have improved his throwing motion, which he saw pay off during the Miami workouts.

“I felt like it’s the best I’ve ever thrown,” Allen said, noting the next step is reproducing that motion once the Bills can begin practicing. “I feel good where I’m at right now.”