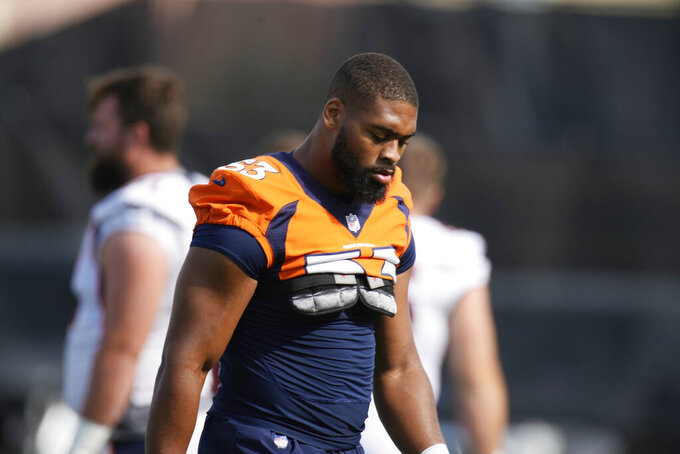 In this Friday, July 30, 2021, file photo, Denver Broncos linebacker Jonathon Cooper heads over to take part in drills at an NFL football training camp in Englewood, Colo. The former Ohio State star expected to get drafted earlier than the 239th pick in Round 7, but an EKG in late April revealed he needed another cardiac ablation, a procedure that scars heart tissue to block electrical signals and restore a normal heart rhythm. (AP Photo/David Zalubowski, File)

ENGLEWOOD, Colo. (AP) — Wouldn't you know the player being described as all heart is the one who missed the offseason program after undergoing three heart procedures and was nearly implanted with a pacemaker.

Rookie linebacker Jonathon Cooper, whose stock slipped after an EKG raised red flags just before the NFL draft, has made a good first impression at Broncos training camp.

“I like what I've seen from him,” coach Vic Fangio said Tuesday after another spirited practice by Cooper. “He plays hard — he naturally plays hard. You know, some guys have to push themselves to play hard. It comes naturally to him, which is nice."

That motor was on full display once again when Cooper bull-rushed tackle Cody Conway, who injured his right knee trying to plant his right leg to stop Cooper's momentum on a pass rush drill.

“I would say that’s who I am,” Cooper said of his high-energy style of play. “I’ve been through a lot of adversity in my life and all I know is those heart surgeries were just another obstacle in my way. But I knew that I could overcome them."

The former Ohio State star expected to get drafted earlier than the 239th pick in Round 7, but an EKG in late April revealed he needed another cardiac ablation, a procedure that scars heart tissue to block electrical signals and restore a normal heart rhythm.

Cooper discovered he had an irregular heartbeat as a high school freshman and had two cardiac ablations before finishing his football and basketball careers at Lincoln High in Gahanna, Ohio, a suburb of Columbus.

He spent five years at Ohio State, taking a medical redshirt in 2019 after a serious ankle injury ended his season after four games.

He figured his heart issues were a thing of the past after playing so many years at such a high level since being diagnosed with a rapid heartbeat condition known as Wolff-Parkinson-White.

The 6-foot-4, 260-pound defensive end was a two-year captain with the Buckeyes and the first player in school history honored with the “Block O” jersey for “character and selfless leadership qualities.”

So, you can imagine his surprise when, 48 hours before the draft started, he got word — along with all 32 NFL teams — that he needed yet another heart procedure before he could begin his pro career.

Although cardiac ablation is considered a minimally invasive procedure, one in which catheters are threaded through blood vessels to the heart, there were complications in Cooper's case and he needed three eight-hour procedures in May.

“The doctors had a hard time getting in there and taking care of it," Cooper said. "There was even some talk of a pacemaker at some point but thank God I'm here. My family supported me. The doctors did an amazing job. I'm just blessed to be out here and I don't take a second for granted because I know how quick it can be taken away.”

Cooper said he worried about his future in football.

“When they started talking about pacemakers and how difficult it was to operate on, those worries, they don't go away,” he said. “They linger in your head.

Cooper said he never had any discomfort before or after the operations and the only difference he feels now is his body acclimating to the altitude.

The Broncos moved him from defensive end to outside linebacker, so he's learning to drop back in coverage and rush without having his hand on the ground at the snap, things that can take some getting used to.

“I've been getting better every single day and that's the whole goal,” he said.

Cooper trusts his heart issues are behind him.

“I'll probably have to do another EKG next year just to make sure everything's still going smoothly,” he said, “but for now I mean, I feel great, I'm looking toward the future with just positive vibes and just full force ahead.”

Notes: Conway was carted off the field shortly before DT Deyon Sizer left with a right hamstring injury. ... WR K.J. Hamler is in COVID-19 protocols and missed practice. Hamler said last week he was fully vaccinated but hadn't yet reached 14 days since his second shot.