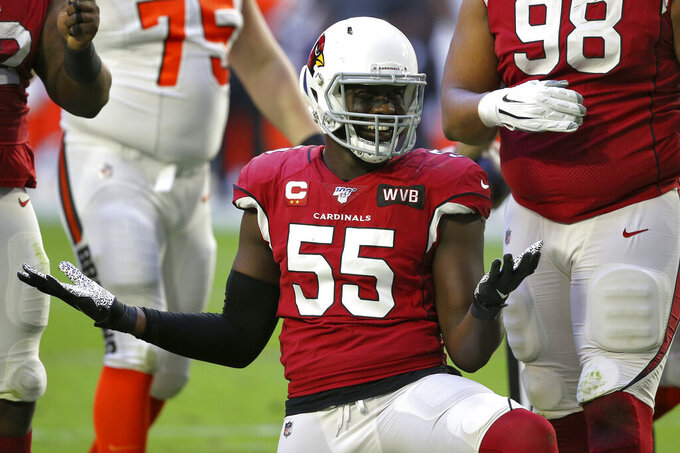 Arizona Cardinals linebacker Chandler Jones (55) celebrates after a sack against the Cleveland Browns during the first half of an NFL football game, Sunday, Dec. 15, 2019, in Glendale, Ariz. (AP Photo/Ross D. Franklin)

TEMPE, Ariz. (AP) — It was a fitting season finale for the Cardinals, who played a competitive, entertaining game on the road before ultimately losing to the Los Angeles Rams 31-24 on Sunday.

Arizona almost had a pretty good football team this season. But not quite.

The Cardinals finished with a 5-10-1 record, an improvement over the 3-13 mark from a season ago. More importantly, the combination of first-year coach Kliff Kingsbury and rookie quarterback Kyler Murray showed a lot of promise as potential franchise cornerstones.

For the first year in a new offensive system — especially one somewhat unorthodox by NFL standards — five wins wasn't bad. More will be expected next season.

“It’s about winning games," Kingsbury said. “And that’s something we want to be better at moving forward.”

Murray, the No. 1 overall pick in April, was very good in his first season, finishing with 3,722 yards passing, 20 touchdowns and 12 interceptions. He also ran for 544 yards and four touchdowns.

Some thought the 2018 Heisman Trophy winner out of Oklahoma might struggle in the NFL because he's just 5-foot-10, but his short stature wasn't a problem and he started all 16 games. Kingsbury's version of the ‘Air Raid’ offense changed some during the season — the Cardinals ran the ball much more as the season progressed — and Murray adjusted his style to whatever was necessary.

“I think the growth we’ve shown from start to finish is what I’m most proud of,” Murray said. “I know the guys are proud of it. It’s Year 1 for us, a lot of guys have bought into the system.”

Later he added: "Going into next season, I think we’ll be pretty dangerous.”

That's certainly possible, though there's little doubt the Cardinals need more talent. The defense was among the worst in the NFL, giving up the most total yards.

Arizona has a few keepers on defense, including a pair of Pro Bowl players. Linebacker Chandler Jones was second in the league with 19 sacks and safety Budda Baker was fourth with 147 tackles. Veteran cornerback Patrick Peterson played better in the season's final few games after initially struggling in his return from a six-game suspension.

Changes will be made, but Kingsbury wasn't ready to discuss specifics. He also said he hopes to make a big jump in his understanding of the NFL in his second year.

“I felt like we were competitive and had a chance to win a bunch of games,” Kingsbury said. “This league, it comes down to one-score games, and we were in a bunch of them. We just didn’t get over the top. A lot of that’s on me. A lot of that is coaching and being better in situational football.”

JOSEPH WILL BE BACK

Kingsbury confirmed Monday that defensive coordinator Vance Joseph will return next season. The defense showed some improvement in the final three weeks, especially during wins over Cleveland and Seattle.

“I think continuity is huge," Kingsbury said. "When you look at the top organizations out there and how they’ve been able to keep assistant coaches and keep top players and homegrown players, I think that’s a big part of it.

It remains to be seen whether veteran receiver Larry Fitzgerald returns for a 17th season.

The 36-year-old has caught more balls than anyone in NFL history except Jerry Rice and was very productive again this season, playing all 16 games and catching a team-high 75 passes for 804 yards and four touchdowns. Fitzgerald has stayed coy about his decision, though he's said several times he enjoys playing with Murray and for Kingsbury.

Kingsbury said his pitch to Fitzgerald will be brief: “Please come back.”

The quartet didn't necessarily play poorly, but the team has obviously committed to mostly younger players. Kingsbury said the Cardinals would pick their spots for adding veterans in the future.

“There’s definitely a time and place for that,” Kingsbury said. "I think the learning experience for us was just making sure when you do that, you make sure it is the right time to do it and the right person you’re bringing in.”

It's a crucial offseason for the Cardinals, who need to build on the positive momentum they've gained. Arizona could use help at just about every position, especially along the defensive line, but the most important development might be a year of continuity with Kingsbury, Murray and a nucleus of young players.